What Will Trump's Tariffs Mean for America's Economy? 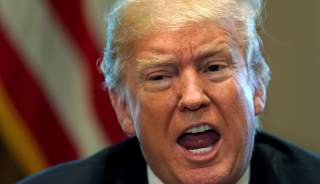 In what the editorial board of the Wall Street Journal called it “the biggest policy blunder of his Presidency” as President Donald Trump announced that he would impose a 25 percent tariff on imported steel and 10 percent on aluminum. The White House declaration, with China as one of the main targets, underscores the Trump administration’s misguided belief that “when a country (USA) is losing many billions of dollars on trade with virtually every country it does business with, trade wars are good, and easy to win. Example, when we are down $100 billion with a certain country and they get cute, don’t trade anymore—we win big. It’s easy!”

President Trump’s “revengeful” trade policy pronouncements have become not only myopic but have also undermined the national security and economic interests of the United States and its ability to navigate global diplomacy with its friends and allies. Despite the tensions between the two nations in both economic and geopolitical realms, however, Washington and Beijing have generally recognized the mutual benefits of trade. This form of “controlled tension” has in the past been able to navigate the contours of various bilateral disputes and keep good relations with other countries.

All that changed in 2016 when then presidential candidate Trump declared that America could “no longer allow China to rape our country” and that it was the “greatest theft in the history of the world.” Becoming President Trump in January 2017, he kept his campaign pledge and, on his first day in office, withdrew American participation in the Trans-Pacific Partnership, a trade deal that created a free-trade zone with eleven other nations that constituted approximately 40 percent of the world’s economy.

This turned out to be only an opening salvo to a busy 2017 where China was either the direct or indirect target of trade actions. In April, the U.S. Department of Commerce self-initiated an inquiry under Section 232 of the 1962 Trade Expansion Act to determine if foreign steel imports compromise national security. In November, the Department of Commerce self-initiated investigations on antidumping and countervailing duties of common alloy aluminum sheet from China. According to the Washington Post, 2017 made “the busiest year for tariff cases since 2001, among other disputes over Spanish olives, Vietnamese tool chests, and Canadian jetliners.”

Not to lose the momentum of 2017, the Trump White House began 2018 by approving broad tariffs on imported solar cells and washing machines because they are believed to be the “cause of serious injury to domestic manufacturers.”

Having completed the Section 232 investigation on January 11, Secretary of Commerce Wilbur Ross released the results on February 16, forming the basis for President Trump’s unilateral tariff announcement. Ross kept still supporting the president while ignoring the empirical evidence associated with “unintended consequences.” The White House’s “trade war” continues in the midst of rumors that the president’s top economic advisor Gary Cohn will soon the leave the administration as he “lost the battle to prevent the imposition of steep tariffs pushed by protectionist advisers.”

Apart from appealing to President Trump’s voter-base, empirical studies show these types of retaliatory measures not only undermine the desired ends, but the means also result in hampering his own electorate who would eventually pay a higher price as the tariff is transferred to consumers such as beer drinkers and car buyers.

The Trump White House needs to consider the case of the 2002 Section 201 steel tariffs when President George W. Bush imposed “30 percent tariffs on flat steel products, hot-rolled bars, and cold-finished bars, and tariffs up to 15 percent on other steel products.” The tariffs triggered, inter alia:

- Price increases that resulted in the loss of 200,000 American jobs; worth nearly “$4 billion in lost wages from February to November 2002.”

- In 2002, more American worker lost their jobs due to steel price increases than the total number employed by the steel industry itself (in December 2002, 187,500 Americans were employed by American steel producers).

Downstream steel consumers (think John Deere and Caterpillar) bore much of the burden from the price increases. Some customers opted to source their steel from offshore, while others simply refused to accept the higher prices from suppliers, forcing them to absorb the higher costs and consequently putting them in precarious financial positions.

Not surprisingly, the tariffs immediately led to recriminations from domestic steel consumers and foreign steel exporters that they were being forced to pay for “Bush’s gift to the steel industry,” according to Gary Clyde Hufbauer and Ben Goodrich of the Peterson Institute for International Economics (PIIE), a think tank in Washington, DC. The 2003 PIIE report further stated that the European Union and Japan put the United States on notice that “politically sensitive congressional districts such as textiles from Southeast states and citrus products from Florida” would be targets of retaliation ahead of the November 2002 midterm elections.

Practically speaking, these threats forced the Bush administration into a “balancing act” of granting “just enough product exclusions to prevent foreign retaliation, but not so many as to exhaust the goodwill previously garnered with the steel industry, the [United Steel Workers of America] USWA, and congressional members of the Steel Caucus,” according to the PIIE report.

As expected, the World Trade Organization (WTO) declared the tariffs illegal, and the European Union was authorized $2 billion in retaliatory sanctions against U.S. products. President Bush ultimately rescinded these tariffs 21 months later, much to the chagrin of the steel industry.

The PIIE report ultimately assessed that “although it is possible that the Section 201 remedy saved some jobs by preventing further layoffs, we continue to be baffled by the willingness of unionized workers to believe that protection is a great benefit to them.” The report also asked, “When will they realize that their union leaders wrongly vilify imports and make false promises about the payoff from protection?”

In September 2009, President Obama played the tariff card again when, in an effort to get China to “play by the rules,” levied up to a 35 percent tariff for Chinese tires. Under a United States International Trade Commission (USITC) Section 421 investigation triggered in April, USITC data analysis showed that “the domestic tire industry was materially injured by imports from China” and that these imports were causing a “market disruption” for domestic producers.

In their 2012 study, Hufbauer and Sean Lowry of PIIE calculated that, “even on very generous assumptions,” the decision to levy up to a 35 percent tariff helped to save a maximum of 1,200 jobs, but at a cost of $900,000 for each job saved. The primary beneficiary of this tariff were the tire companies themselves. And only a “small fraction” of this $900,000 got into the pockets of tire workers. In addition, the additional costs to consumers on tires resulted in reduced spending on other retail goods, which indirectly lowered employment in the retail industry, likely costing the U.S. economy more than 2,500 jobs. To these losses, we can add the fact that China then retaliated by “imposing antidumping duties on U.S. exports of chicken parts,” which cost the industry approximately $1 billion in sales.

With this history behind us, it shows that any tariffs levied by President Trump is likely to trigger an equal and opposite reaction from China. Douglas Irwin, Professor of Economics at Dartmouth College, has indicated that history has shown that whenever the United States has levied tariffs on Chinese imports under antidumping provisions allowed by the WTO, “Chinese regulators would suddenly find that U.S. poultry or pork was contaminated and had to be banned, its airlines would start buying from Airbus instead of Boeing, or its food companies would purchase Argentine soybeans and Australian wheat rather than the American equivalents.” Currently, China, along with a number of other countries, are weighing how to respond to Trump’s announcement. But, to be clear, even if no one retaliated against the tariffs, the American economy would still suffer from price increases.

William Zarit, the Chairman of the American Chamber of Commerce in China, has made it clear that “I have been told by certain officials that yes, definitely, there will be retaliation.” Lest there be any ambiguity, the Global Times, the Chinese Communist Party mouthpiece, had already declared in 2016 that “Boeing orders will be replace by Airbus, . . . U.S. auto and iPhone sales in China will suffer a setback, and U.S. soybean and maize imports will be halted.” Not to put too fine a point on the meaning of these threats, Boeing received a $38 billion order in 2015 during Xi Jinping’s plant visit. China was number one among U.S. Agricultural export markets in 2016. Agricultural exports to China grew from $6.7 billion in 2006 to $21.4 billion in 2016. Soybeans alone was valued at $14.2 billion.