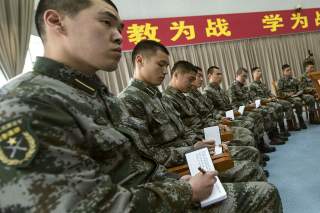 During the 2016 presidential campaign, China became perhaps the most important topic of Donald Trump’s foreign-policy and economic speeches. He has often accused Beijing of “taking advantage” of the U.S. economy and manipulating its currency, which has provided favorable conditions for Chinese exporters to dominate the American consumer-goods market. Thus he explained the vast deficit in the U.S. trade relations with China. Within the first ten months of 2016 alone, the trade deficit with China amounted to $289 billion.

To improve this state of affairs, Trump has threatened to introduce tariffs to raise the price of Chinese goods in the U.S. market by up to 45 percent. To revisit U.S. trade relations with its partners, primarily with China, Trump established a new division within the administration—the National Trade Council—and appointed the academic Peter Navarro to lead it. Navarro is well-known for his stark views against Chinese policies on a wide range of issues, from trade and China-Taiwan relations to Chinese policy towards the East China and South China seas.

Furthermore, Trump and his advisors on U.S.-China relations have suggested that the new administration should abandon the “One China” policy that American presidents have followed since Richard Nixon. In addition, Trump and his advisors seem to believe that the growth of China’s economic and military power makes this policy more expansionary and poses a threat to freedom of navigation in the South China and East China seas, as well as a threat to the security of the U.S. allies in the region—primarily Japan, South Korea and Australia.

Trump’s and his team’s comments during the electoral campaign demonstrated their commitment to revisit trade, economic, military and political relations with China and set them on the right course, which is currently not evolving in favor of the United States. This means that, in the foreseeable future, tensions may rise along with the potential conflict of interests between the United States and China. Hence, I believe it is important to study the views of American experts on the likelihood of potential conflict between the two countries, and the ability of the United States to “put China in its place,” in the expression occasionally used by American politicians and experts.

Regarding China’s currency manipulation with the intent of artificial devaluation many experts believe that Trump is using old data and doing so only to stir the pot and put the Chinese government in an unseemly light. The fact is that for the last few years, China has been raising the value of its currency. To support their opinion, American experts state that since 1994 the U.S. Treasury has not made any announcements on currency manipulation by the Chinese government.

If tariffs on imported Chinese goods are raised by 45 percent, Beijing might retaliate against the imports of U.S. goods, appeal to the World Trade Organization, and accuse the United States of violating WTO rules and regulations. Numerous respected experts agree that a trade war between the world’s two largest economies is fraught with serious consequences for international trade worldwide. Furthermore, the Trump administration should take into account another important factor: raising prices of Chinese goods might undermine the purchasing power of the American middle class, the major consumer of Chinese goods.

Given Beijing’s increased attention and particular sensitivity to everything concerning the role and status of Taiwan, it is expected that the revision of the “One China” policy and strengthening of U.S.-Taiwan relations will cause serious damage to U.S.-China relations—especially if the recommendations of Peter Navarro are implemented, including building a Navy base in the east of the island, equipping the Taiwanese army with new weapons, and deploying Taiwanese submarine fleet with the help of the Japanese, along with the recommencement of private travel to Taiwan for members of Congress and government officials. Some experts believe that Trump’s telephone conversation with the president of Taiwan was not unintentional, but was a step toward the repudiation of the “One China” policy.

Other issues may also contribute to the further deterioration of U.S.-China relations. American authorities have long been expressing their concern over China’s claims to the South China Sea. China’s construction and militarization of artificial islands is disturbing China's neighbors in the South China Sea, and raising demands in Washington to restrain China.

During his confirmation hearing in the Senate for the post of secretary of state, Rex Tillerson urged China to halt the construction of the new artificial islands and warned that the United States would cut off Chinese naval forces’ access to the seven islands that had already been built. This statement caused serious concern among experts, as many fear that such actions by the new U.S. administration may escalate the conflict between the United States and China. However, military experts believe that in order to execute such threats, the United States will have to sharply increase its naval capacity in the Pacific and, in particular, in the South China Sea. Trump’s apparent plans to prioritize the rearming of the U.S. military include improving nuclear capabilities and increasing naval forces, especially in the Pacific theater. These steps to strengthen the U.S. position in restraining China correspond to Reagan’s famous phrase, “peace through strength.” The Trump administration may derive its belief from the fact that if it wants to win concessions from China in trade, economics and geopolitical relations, then it should have a range of instruments for putting pressure on China, from direct military force in the region to the diplomatic tactic of denouncing the “One China” policy.

Furthermore, experts close to the Trump administration recommended strengthening Taiwan's military and diplomatic stance, concurrently creating a coalition with other countries to restrain China. However, it is fair to say that some experts doubt that the new administration will have sufficient resources to dramatically increase its naval forces in the Pacific in a short time, given the United States’ own struggle to improve its infrastructure, which requires trillions of dollars of investment in education and other social concerns.

In conclusion, it is worth noting that not all experts believe U.S.-China relations can only be based on conflict. Some experts believe that interdependence between the two economies allows them to search for opportunities for positive cooperation in the future. For example, Vice President Mike Pence has noted that Indiana had lost jobs to China, but that now jobs were returning, because Chinese companies were investing in local “green” businesses. A number of experts expressed cautious optimism that the United States and China would not “close doors” to each other in the economic sphere, but that the Chinese government, wanting to increase competition for the production and efficiency of its own Chinese private and state-owned enterprises, would open new markets for American capital, which hitherto had been closed to them.

Some have pointed out a very important positive element in the future of U.S.-China relations. Since Trump is a pragmatist and has no ideological “baggage,” which for many decades has burdened American foreign policy, he will not seek to impose American values and standards on China and will not attempt to lecture Beijing about its internal policy. Nevertheless, both the United States and China will have to pass the test of the new policy that Trump is offering towards China. We will know the outcome of these tests when the Trump administration moves from words to deeds. The new policy carries the implications of both a threat of conflict and confrontation, and the possibility of positive reforms in these new relationships. The outcome, in many respects, will depend on the wisdom and skills of the leaders of the two countries to ensure that they make it through this dangerous path without causing major turmoil.

Andranik Migranyan is a chief policy expert at Moscow State University’s Center for Public and Political Programs and a professor at the Moscow Institute of International Relations.