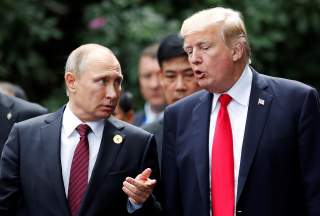 If, a year ago, someone had predicted that the incoming Trump administration would launch a military strike on Syria, approve the shipments of lethal military aid to Ukraine, preside over a tightening of sanctions on the Kremlin, the buildup of U.S. and NATO forces in eastern Europe and designate Russia as a strategic rival of the United States, the foreign policy commentariat would have had a field day. After all, Donald Trump was the "Siberian candidate" who was going to preside over a twenty-first century version of Yalta with his good friend Vladimir Putin. These were the steps that a Hillary Clinton team was expected to make, not someone who had run on a platform of seeking better relations with Moscow.

Yet here we are. The situation has changed over the past year from what was expected of Trump (when champagne corks popped in the Duma after the results of the November 2016 election were broadcast) to reports that Russian officials quietly admit that they miss dealing with their Obama-era counterparts. So what does this portend for the future?

The strategic ethos of the Trump administration appears to be settling in to a variant of the old "selective cooperation" approach, buttressed by Trump's own personal assessment that U.S. diplomats were too keen to offer concessions and inducements to other countries to get their support when that support would have materialized in the end. As I previously noted, the gamble that the Trump team is taking vis-a-vis North Korea is that Russia and China have too much at stake to permit an unraveling of the situation on the Korean peninsula, and therefore there is no need for Washington to offer compromises in other areas to get Beijing and Moscow on board for tough new measures directed against Kim Jong-un. When it comes to Ukraine, the logic appears to be that Russia has too much to lose to restart the conflict and that U.S. efforts to rebuild the Ukrainian security forces will not provoke Russian steps to ascend the ladder of escalation. Likewise, the administration sees no reason for the U.S. to abandon its operations in Syria and does not feel any need to step back from the reiteration of the Obama-era policy that Bashar al-Assad has no political future in Syria.

So the starting point for U.S.-Russia relations in 2018 is the Trump administration's insistence that improved U.S.-Russia ties, while desirable, are not essential—and that the ball is in Moscow's court to make a series of up-front concessions and policy reversals. This is based on the analysis that Russia will face continued economic problems, will not be able to sanctions-proof its economy and will find it increasingly difficult to sustain its current international position. In some ways, this is a variant of the strategy pursued by the Obama administration: to wait for the moment when Russia can, proverbially, no longer pay the bills.

Putin's starting point—based on his experience in dealing with four previous U.S. presidents, and now having a better sense of how U.S. domestic politics works—is not to offer any first moves given the lack of confidence he has that any gestures would be reciprocated. There will always be some Russian transgression that Congress will use as the excuse for not authorizing sanctions relief. The Russians are also aware that the Trump administration has added additional stress to the fractures in the trans-Atlantic alliance, with the previously warm and strong relationship between President Obama and German chancellor Angela Merkel now replaced by a degree of disdain in both Berlin and Washington for the other country's leader. America's Asian allies are likewise concerned about the reliability and staying power of the United States. So Putin might feel it a better strategy to concentrate his efforts on de-linking key U.S. partners from Washington's preferred agenda, a strategy that has already produced some early returns in the strategic reorientation of Turkey towards a closer working relationship with Russia.

If the current U.S. strategy seems to work—Russia, undertaking a cost/benefit analysis, decides that its current trajectory is not sustainable and signals its willingness to pull back on a number of the issues which have led to the current impasse in the relationship—then the advisors around Trump who have argued for holding to a stronger line on Russia will have been vindicated.The possibility for political turmoil in Russia around the presidential elections may also lead Russia to focus more in an inward direction for a while, which would produce a similar result. But the real question that has not yet been answered is how personally invested the president himself is in this strategy on Russia. As with the Afghan surge decision, Trump seems to have taken the position that “his generals” and their people have promised that they can achieve results. If their approaches—whether with regards to Afghanistan, or to Russia, or to China—do not “work,” or at least do not bring what Trump would view as successful outcomes, will he start passing “pink slips” around the national security establishment? Moreover, would it mean that he would return to the themes he outlined during his presidential campaign; reversing course to start “cutting deals” with the Kremlin? In 2018, will we see the authentic Trumpian preferences on Russia policy emerge?