What Would Achieving a Real Reset in U.S.-Russia Relations Take? 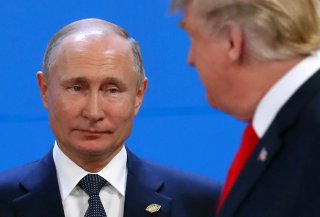 The United States has a legitimate complaint about Moscow’s behavior on one especially volatile issue: interference in U.S. elections. True, some of the allegations about the Kremlin’s role are shrill and wildly exaggerated. Too many Democrats have used “Russian interference” as an all-purpose excuse for their own defective electoral strategy in the 2016 election that led to Donald Trump’s startling upset victory over Hillary Clinton. That being said, there is substantial evidence that Moscow used a variety of techniques in an attempt to tilt the election in favor of Trump, who had expressed the desire for better relations with Russia. U.S. intelligence agencies also have uncovered evidence that Russian operatives are exploring ways to do the same in 2020.

It is unlikely that Russia’s initiatives had any material impact on the 2016 balloting. Nevertheless, Trump administration officials should make it very clear to the Kremlin that even attempts at meddling have a serious, negative impact on U.S.-Russia relations. Granted, Washington’s protests would have greater credibility if the United States did not have a lengthy record of meddling in the political affairs of other countries, but it still is appropriate to express objections to Moscow about its conduct. This is an issue on which Putin and his associates would be wise to beat a prompt retreat.

ANOTHER RUSSIAN action that U.S. leaders have a right to protest is Moscow’s escalating role in the Western Hemisphere. Russia definitely has become involved in Venezuela’s political turbulence. Moscow is a major financial prop for Nicolas Maduro’s staunchly anti-U.S. government, and the Kremlin has provided tangible military backing as well. In December 2018, Russia even deployed two nuclear‐capable bombers to Venezuela, and in March 2019, it sent some two hundred military personnel to help Caracas refurbish its air defense system. Several hundred Russian mercenaries also appear to be operating in the country to train and assist Maduro’s murderous security forces in dealing with regime opponents. The presence and backing of those troops may even have stiffened Maduro’s resolve to remain in power instead of seeking exile in Havana when anti-regime demonstrations mushroomed in May 2019.

Russia’s policy in Venezuela represents a direct challenge to the Monroe Doctrine. So too do the growing economic and military ties between Moscow and Nicaragua’s leftist government. Since the proclamation of the Monroe Doctrine in the early 1820s, U.S. leaders have regarded patron-client economic and military relationships between foreign powers and Latin American nations as a threat to the security of the United States. Cuba became a Soviet political and military client for decades, precisely the situation the Monroe Doctrine aimed to prevent, and the relationship has continued with Russia. A repetition of that development with other countries is highly undesirable from the standpoint of U.S. interests.

U.S. leaders should make it clear that a continuation of the Kremlin’s meddling in the Western Hemisphere will have a markedly negative effect on already tenuous bilateral relations. It is appropriate for Washington to insist that Russia’s relations with Caracas, Managua, and Havana be confined to normal diplomatic ties and limited economic ties. Kremlin ambitions to have those countries serve as Russian military clients, or even economic dependents, is unacceptable.

Preserving Washington’s long-standing sphere of influence in the Western Hemisphere points to what needs to be the foundation of a new, less confrontational relationship with Russia. Just as the United States should insist that Moscow respect the Monroe Doctrine, it is imperative for U.S. leaders to accord the same respect to a Russian sphere of influence in Eastern Europe. That approach requires some essential new thinking on the part of U.S. policymakers.

WASHINGTON MUST accept the reality that spheres of influence are still very much a part of the international system. Indeed, as the world becomes increasingly multipolar diplomatically, economically, and to some extent even militarily, major powers will likely become even more insistent on such prerogatives. Russia is hardly the only country behaving in that fashion. We are witnessing a similar stance as China flexes its geostrategic muscles in the South China Sea, the Taiwan Strait, the East China Sea, and elsewhere in East Asia. Washington needs to quell its desire to maintain primacy on a global basis in the face of growing challenges. Eastern Europe is a relatively easy place for the United States to back away and respect another major power’s sphere of influence. Doing so also is a crucial first step in a true reset of U.S.-Russian relations.

Ted Galen Carpenter, a senior fellow in defense and foreign policy studies at the Cato Institute and a contributing editor at The National Interest, is the author of twelve books and more than 850 articles on international affairs. His latest book is NATO: The Dangerous Dinosaur (2019).