What Would China Do if America Sold Taiwan F-35s? 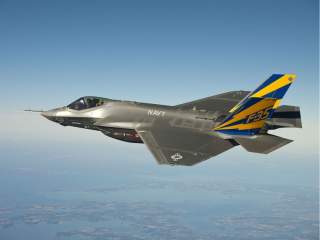 What would happen if the United States decides to sell its new F-35 Lightning II fighter to Taiwan? The fictionalized scenario below, based on a careful analysis of the Chinese leadership, attempts to answer that question.

March 2, 2017: A Taiwanese fighter jet on a routine patrol collides with a Chinese drone and crashes into the South China Sea; the pilot is killed. In response, the Republic of China Air Force, which for some time has been asking for upgraded planes, presses for a new arms package from America. Despite promising to maintain peace and stability in cross-Strait relations a little over a year ago in her victory speech, Tsai Ing-Wen, Taiwan’s president, is faced with growing pressure to respond strongly. A concerned Legislative Yuan authorizes major defense budget increases (overcoming budget difficulties) aimed at acquiring the F-35. Eager to signal that the rebalance she spearheaded in the Obama administration is returning in full force, newly elected president Hillary Clinton (following the advice of hawkish media commentators) directs the Defense Department to sell Taipei fifty F-35s. The sale is made, despite severe protestations from Beijing. How is a humiliated China likely to respond?

President Xi assembles his National Security Commission (NSC) and asks for options. Exasperated with the United States for so publically rejecting his offer of a “new type of great power relations,” he says he wants to “impose costs” on Taiwan and America for their destabilizing actions. Liu He, Xi’s principal economic advisor and vice chairman of the National Development and Reform Commission, replies that the Sino-American economic relationship is too important to risk over arms sales to Taiwan, which have occurred before. “Moreover, even unofficial aggression, such as the incident with the young singer during the election in Taiwan, can strengthen the voices for independence. Our response, therefore, should be subtle.”

Liu outlines a series of policies. First, he says, drastically cut mainland tourism to Taiwan. Currently, he explains, around four million (or 40 percent) of all tourists visiting Taiwan come from mainland China. Second, go after Taiwanese business elites—a powerful electoral constituency—by hinting in meetings that Taiwanese exports will be curtailed. (Currently, such exports to mainland China make up more than a quarter of all Taiwanese exports.) “We can restrain market access to China for DPP-friendly companies in Taiwan, particularly those with ties to Japan and America, by instructing the Ministry of Commerce to use the new anti-monopoly law to the fullest extent.”

Wang Qishan, the Party’s anti-corruption czar, chimes in: “We should also pay special attention to the estimated one million Taiwanese living on the mainland and initiate disciplinary investigations against any two-faced entrepreneurs who benefit from Chinese trade while supporting independence.”

Xi’s chief of staff and director of the General Office, Li Zhanshu, sums up the objective of these economic actions: halt both official and unofficial cross-Strait dialogue to punish Tsai Ing-wen, and incentivize Taiwan’s business elites and even ordinary entrepreneurs to work to restore positive and peaceful cross-Strait relations.

Nodding in consent, Xi agrees to this plan of action. “But what about military options?” he inquires.

Air Force General and vice chairman of the Central Military Commission (CMC) Xu Qiliang speaks up. “These fighters do not fundamentally change the military balance. We already cover Taiwan with S-400 ground to air missiles and as long as the Americans remain uninvolved in any dispute, we will retain total air dominance despite the new fighters.”

“Exactly,” breaks in Wang Huning, Xi’s chief ideologue and a confidant of the last three Chinese presidents. “Furthermore, if we respond too aggressively to the sale of the fighters, we could strengthen pro-independence rebels in Taiwan and undermine the peaceful nature of the China dream.” Looking directly at the two CMC vice chairmen, Wang declaims: “There should be no missiles fired into the ocean like in previous crises, and no independent military response. Instead, as in the economic sphere, China’s response should be shrewder.”

“We should begin by approaching the twenty-one states that currently recognize Taiwan—especially in Oceania and Latin America—and initiate negotiations to switch their recognition to mainland China,” Wang says. “As you know, we have shelved these issues for some time, but we now need to further isolate and pressure Taiwan on the global stage. The first step is to start a charm offensive incentivizing these states to recognize that there is only one China. We should also instruct the United Work Front Department to reach out to our KMT contacts and make clear that F-35s cross a line.”

Cai Qi, Li Zhanshu’s deputy in the NSC, has been waiting patiently as one of the most junior advisors present. But Xi now calls on him for advice. “A whitewashed crow soon shows itself black again,” he answers, citing an old Chinese saying. “The sale of F-35s blatantly violates the 1982 Joint Communiqué in which the U.S. promised to gradually reduce its weapons sales to Taiwan. We should respond by ceasing to cooperate with the Americans on cybersecurity, and accelerate our covert efforts to infiltrate American critical infrastructure and acquire American trade secrets. If they don’t live by their word, why should we live by ours?”

Fan Changlong, the other vice chairman of the CMC, shakes his head angrily. Not satisfied with the subtle response, he says: “Why don’t you recognize that we are now in a direct rivalry with the United States? This is just the latest of their tricks, alongside the Belgrade embassy bombing, their support of Tibetan revolutionaries and militarization of South China Sea. They are slowly encircling us, just as they are Russia through NATO expansion. We should have a firmer response: for example, selling ballistic missiles to Iran. That would send a strong signal to the Americans.”

Li Zhanshu, well-versed in managing both diplomatic and military affairs, quickly responds that UN Security Resolutions prohibit such a sale, at least until the final sanctions directed against Iran are lifted. If this happens as scheduled in 2023, China could sell DF-21 anti-ship ballistic missiles to Iran. This weapon system would allow the Iranians to deter U.S. aircraft carriers aggressively stationed in Bahrain, significantly upgrading Iran’s anti-access/area denial (A2/AD) capabilities. The agreement, which would be made in secret, could be in exchange for Iranian oil looking to enter China’s increasingly energy-dependent market. In the meantime, he suggests, China should finalize its deal to sell 150 J-10 fighters to Iran.

Sensing consensus among his advisors, Xi breaks up the meeting but asks Wang and Li to stay back. He instructs Li to implement the economic and political sanctions against Taiwan and to impose costs on the U.S. through the specified cyber and arms-sales options. However, he emphasizes that these responses are really just tactical, and must be reinforced by China’s longer-term plans to resist America’s containment of China, specifically diversifying China’s economic base by increasing trade with Eurasian countries, modernizing the PLA to challenge U.S. “primacy” in East Asia, and seeking closer relationships with other great powers mistreated by America.

“So, we will respond to America’s aggressive actions by hurting Taiwan economically and politically. We will impose costs on the U.S. by ending cyber cooperation, increasing our infiltration of U.S. critical infrastructure, and by signing an arms deal with Iran. How is America likely to respond to these actions?” Xi asks his two closest advisors.

Li Zhanshu responds first: “We are already excluded from the TPP, and the U.S. has recently announced increased cooperation with the Philippines in building up its A2/AD capabilities. The Americans are likely to continue to interfere in regional affairs and China’s domestic policies even if we do not react to the sale of F-35s. Furthermore, they continue to violate their ‘free-market’ rhetoric by disadvantaging Chinese investment in America.”

Wang Huning agrees, but cautions the younger Li: “That may be, but if we do not tread carefully we might further American containment. Remember, there is growing dissatisfaction in Washington with U.S. engagement policy. Right now we still enjoy a window of strategic opportunity. Following our agreement to UN sanctions against North Korea, South Korea and the United States shelved THAAD deployment. This might be brought up again, as would potential tariffs or technology controls—or the United States could leak its success in the recent cyber infiltration of the PLA’s Strategic Rocket force, which would be a national embarrassment.”

Xi, expecting the U.S.-China rivalry to continue, agrees: “We should not overreach; however, we must send a strong signal. It’s important to stand up to America at a time of our own choosing. Countless people with lofty ideals rose up for the rejuvenation of the Chinese nation, but each time they failed. Our responsibility now is to rally and lead the entire Party and the Chinese people to achieve national rejuvenation by investing in the long-term capabilities that will ultimately make China secure. Then, finally, we will no longer have to suffer humiliation from the Americans.”

In the scenario above, we have imagined how China could respond to the sale of F-35s to Taiwan, a move that China would not watch quiescently. This requires assumptions about who “matters” in Chinese national security decisionmaking. We, for example, have assumed (not without warrant) that by early 2017 Premier Li Keqiang will have become even more marginalized and that State Councilor Yang Jiechi is almost entirely without influence. Other scenarios, naturally, are possible.