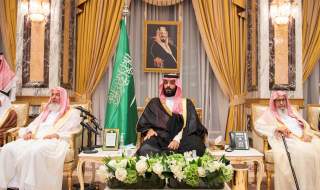 Not since the overthrow of King Saud by his brother Prince (then King) Faisal in 1964, and the latter’s assassination in 1975, has the monarchical system in Saudi Arabia faced such a potential crisis as it does today. On Saturday the government, led by Crown Prince Mohammad bin Salman (known as MBS) ordered the arrest of eleven royal princes, including prominent billionaire and international investor Alwaleed bin Talal, and the removal and arrest of dozens of current and former ministers—ostensibly in a move to curb corruption. However, such large-scale dismissals and detentions of powerful persons suggests that this is the latest move by MBS, supported by his father King Salman, to consolidate his power and emerge as the unchallenged ruler of Saudi Arabia after his father’s demise.

The most powerful of those removed from their posts was Prince Mutaib bin Abdullah, the minister in charge of the National Guard and the favorite son of the late King Abdullah, Salman’s predecessor. At one time, Prince Mutaib was himself a contender for the Saudi throne. The National Guard is the successor to the tribal militia known as the Ikhwan (Brothers), which was principally responsible for the conquest of the Arabian Peninsula and consolidation of Saudi power under the founder of the Saudi state, King Abd al-Aziz.

The National Guard, numbered between seventy-five thousand and one hundred thousand, is almost equal to the strength of the regular Saudi military. Since the 1950s and 1960s, when the Arab world experienced a series of military coups led by anti-monarchy army officers, the National Guard, drawn from tribes unflinchingly loyal to the House of Saud, was built up as a check on the regular military’s political ambitions. The parallel with Iran’s Islamic Revolutionary Guard Corps, also initially conceived to provide security to the revolutionary regime, is instructive. Since 1962, when Prince (later King) Abdullah was appointed commander of the National Guard, it has also been perceived as a check on the power of the Sudairi brothers (seven of them born from a wife of King Abd al-Aziz belonging to the Sudairi tribe), who have occupied the Saudi throne for most of the time since the founder’s death in 1953. One of the Sudairi princes has always commanded the regular army.

Abdullah, through his mother, was descended from the Shammar tribe and was a half brother to the Sudairi seven, the most important branch of Abd al-Aziz’s family. After King Fahd suffered a debilitating stroke in 1995, Crown Prince Abdullah became the de facto ruler of the kingdom and appointed his son Mutaib to run the National Guard. Mutaib officially became the commander, and later minister in charge of the National Guard, when Abdullah ascended the throne in 2005. The National Guard continued to be the stronghold of the Shammar tribe under Mutaib, which King Salman and his son have found galling.

The chief purpose of last Saturday’s exercise appears to have been removing Prince Mutaib from his key position. The other princes arrested were roped in to give the impression that he was not being singled out for retribution, and that he, like many of the others detained, was venal and corrupt. Prince Mutaib’s dismissal and arrest follows on the heels of Prince Muhammad bin Nayef’s (MBN) removal as crown prince and interior minister in June, his reported detention in his palace and his replacement by MBS as crown prince.

MBN was not only crown prince but also interior minister, a position he inherited from his father Prince Nayef, who was King Salman’s elder brother, on the latter’s death. Nayef had been appointed crown prince by King Abdullah and, had he not passed away before the king, would have inherited the throne to the exclusion of King Salman. As minister of the interior, MBN was a powerful force in his own right, commanding the Interior Ministry troops in charge of internal security, the secret police and counterterrorism operations. MBN, after surviving an attempt on his life in 2009 by Al Qaeda operatives, established his credentials as “the prince of counterterrorism” by rooting out Al Qaeda from Saudi Arabia. Consequently, he became a trusted favorite of Washington, especially of American intelligence agencies. He thus came to be seen as an obstacle to MBS’s ambitions. His dismissal by King Salman was intended to neutralize the interior ministry and its forces as a challenge to Salman’s son, the new crown prince.

With the dismissal of Prince Mutaib last Saturday, it appears that the National Guard—the last stronghold of any potential challenger to MBS—has also been neutralized. MBS is now in control of the regular army, the National Guard and the Interior Ministry troops. As a result, power is now concentrated to an unprecedented degree in the hands of one small segment of the vast Al Saud family, essentially King Salman and his favorite son, the crown prince. Such concentration of power is likely to alienate, must have already alienated, several senior members and powerful branches of the sprawling Al Saud clan.

The Saudi monarchy had survived so far on the basis of a shared consensus among the leading princes that they must hang together, lest they be hanged separately. The loaves and fishes of office, including those derived from revenues generated by the country’s enormous oil wealth, were consequently distributed relatively fairly among the main branches of the House of Saud. This seems no longer to be the case. King Salman has blatantly violated the fundamental rule of governance by consensus among the senior Al Saud princes, obviously at the instance of his ambitious thirty-two-year-old son, who seems to be in an unseemly hurry to concentrate all power in his own hands. Such haste and brazenness on the part of MBS does not bode well for the future of the Saudi regime, especially since he is also seen as personally culpable for recent foreign misadventures, including Saudi involvement in the Yemeni quagmire. MBS, it appears, has overreached himself. His most recent actions are likely to generate a blowback, sooner or later, from within the House of Saud that could cripple the Saudi monarchy’s capacity to govern.