What’s Behind the Syrian Chemical-Weapons Warning? 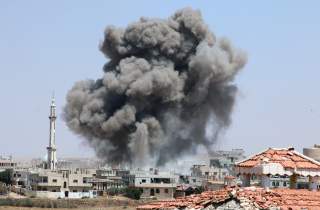 From seemingly out of nowhere, White House Press Secretary Sean Spicer released a brief and ominous statement late Monday evening regarding Bashar al-Assad, Syria and chemical weapons—three things that go together like fire, dynamite and gasoline:

As we have previously stated, the United States is in Syria to eliminate the Islamic State of Iraq and Syria. If, however, Assad conducts another mass murder attack using chemical weapons, he and his military will pay a heavy price.

Picking up where the White House left off, shortly after the statement’s release U.S. ambassador to the UN Nikki Haley tweeted: “Any further attacks done to the people of Syria will be blamed on Assad, but also on Russia & Iran who support him killing his own people.” She is known to have a more forward-leaning position on foreign-policy issues, especially when compared to the State Department. Nevertheless, she was added to the Principals Committee that deals with the national-security issues after the last known Syrian chemical-weapons attack in Khan Sheikhoun in April.

Earlier on Monday she tweeted, “Great meeting and lunch with @POTUS and @VP today #USStrong” referring to the president and Vice President Mike Pence. Accompanying that sentiment was a picture of herself sitting across from President Trump in the Oval Office.

Lunch wasn’t the president’s only foreign-policy related dining experience of the day either. The White House hosted a dinner for the visiting Indian prime minister Narendra Modi, which was attended by Secretary of Defense James Mattis, Secretary of State Rex Tillerson and National Security Advisor H. R. McMaster. Secretary Mattis departed for Germany and Belgium later in the evening and Joint Chiefs of Staff Chairman Joseph Dunford was in Afghanistan at the time.

According to an Associated Press report, a nongovernmental source with close ties to the White House said the administration had “received intelligence that the Syrians were mixing precursor chemicals for a possible sarin-gas attack in either the east or south of the country, where government troops and allied forces have faced recent setbacks.”

The United States was watching Assad’s Shayrat Airbase. After the regime’s air-strike attack on Khan Sheikhoun in April, senior administration officials told reporters in a White House background briefing that they had “quite clear” information that a SU-22 fixed-wing aircraft from the regime-controlled Shayrat airfield carried out the attack. The airfield was also the recipient of President Trump’s Tomahawk missile response.

As one would expect, the latest White House message on Syria reverberated internationally. Ali Haidar, who holds the cynically contemptuous title of “Syrian Minister for National Reconciliation” dismissed the statement and suggested, “the charges foreshadowed a new diplomatic campaign against Syria at the UN.”

The Kremlin wasn’t far behind. Russian president Vladimir Putin’s spokesman Dmitry Peskov said, “such threats to Syria’s legitimate leaders are unacceptable.” Going further, Peskov took issue with the Trump administration’s use of the phrase “another chemical weapons attack” because it implies there was, in fact, a previous chemical-weapons attack. He contended that Moscow called for an independent investigation into the April attack but one was never conducted.

Absent from much of the frenzied reporting on the late night warning is the context of the evolving war in Syria. The natural questions have already been asked: Why would Assad use chemical weapons again? What intelligence did the United States have that led to the White House warning? What does “a heavy price” mean as far as a response is concerned? Is there a metric already worked out by the White House that calibrates American responses to specific actions from Assad? And so on.

“Everybody wants to know what we’re going to do and what the threshold is,” a senior White House official with knowledge of national-security matters told this author on Tuesday, “but that’s not something we do. We don’t give our playbook away.”

The senior official continued: “The strategic objective is to stop the carnage in Syria and our target specifically is ISIS.” When asked about the escalating developments in Syria’s east and south, he reiterated, “The Islamic State is the military target of our forces,” then he added, “But that doesn’t mean we don’t understand the broader geostrategic reality and the interplay of all the other actors involved in the theater.”

The center of the conflict for pro-regime forces has shifted from the west, eastward towards the territory that ISIS holds as they battle U.S.-backed forces. It brings Team Assad into direct conflict with the United States and raises the risk to U.S. service members on the ground. Assad and his Iranian patrons may understand the balance of power in the wider region may well be determined in Syria’s east.

As ISIS dwindles, the other major powers and patrons involved in the Syrian cauldron are redeploying their forces as they vie for political, economic or military influence over Syria’s future.

Iran remains on the march. Having succeeded in effectively propping up the regime of Bashar al-Assad, its priority is to complete a Shia corridor through the country giving Tehran a land bridge to Lebanon and the Mediterranean Sea.

The Importance of Idlib

It elevates the importance of three primary arteries from Iraq into eastern Syria. Tehran must take one of them to make that passage contiguous. One path runs through Raqqa, another runs through Deir al-Zour, and the third lies to the south near the border triangle between Syria, Iraq and Jordan. The extent to which Iran and Syria are determined to take one if not all of those pathways should not be underestimated.

If Assad was preparing for another chemical-weapons attack, a likely choice would be the area of Idlib while turning his attention away to the East. After all, in the wake of the U.S. downing of the Syrian fighter jet, Russia warned the United States not to fly west of the Euphrates River. Assad could be banking on that warning as an insurance policy against U.S. action.

There are several reasons Assad would target Idlib, first and foremost is that it is where most of the insurgents fled to after regime forces recaptured Aleppo at the end of 2016. It also is the area Team Assad has prioritized until now.

Despite Russia’s air support since 2015 and the heavy lifting carried out by Iran and its proxies on the ground since 2013, the Alawi Syrian dictator and his two chief allies have proven unable to capture and hold territory while simultaneously advancing along a second battlefront. Their efforts have mainly focused on western Syria where the larger cities and Alawi population centers are located, with an additional emphasis on the northwestern coastal strip considered vital to the three stakeholders.

In the west, the Syrian insurgency is on its last legs. There are still pockets of resistance aside from Idlib—notably in Damascus suburbs—but they no longer present the threat they once did.

The eastern territory that ISIS holds is less populated and hasn’t been as high on Assad’s to-do list when compared to the immediate challenges posed by the other Sunni Salafi rebel groups or elements of the Free Syrian Army closer to Assad’s center of power.

His original intention was to finish off those areas before heading east, regardless of any external peace conferences or outside political processes taking shape. He seems to understand that even if he were somehow forced to negotiate a political settlement, where he sits at the table will be determined by where he and his aligned forces stand on the battlefield.

It brings into focus Assad’s strategic choice to use sarin gas in Khan Sheikhoun on April 4. That was also directed at the rebels and civilians in the Idlib Province and was also close to where Russia has its naval and air base, and forward listening post. Within hours of the strike, Assad and his partners cynically followed up by bombing the medical clinics where the first victims of the attack were being treated.

The sheer brutality of that action was designed to send a chilling message that their resistance was not only futile but that Assad and his allies are free to act with sinister impunity.

The strategy also reflected the extent to which he first wanted to pacify the Idlib Province before he and his partners turned their attention toward reconquering the rest of Syria. Additionally, it highlights Team Assad’s inability to quickly pacify the area using conventional weapons, despite the considerable assets Iran and Russia have devoted to that cause. Another chemical-weapons attack in Idlib Province could dissuade further rebel advances.