What's Going on along the Saudi-Yemeni Border? 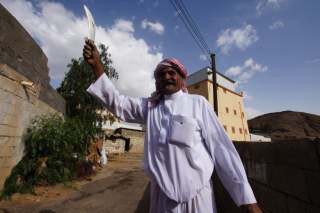 July 24 marked the fifth consecutive day that Saudi sources confirmed cross-border incidents in the country’s southern border provinces. On that day, not only were clashes reported at the al-Tuwal border crossing, but the landing of projectiles occurred in both the Jazan and Najran Provinces. Similar incidents were reported from July 20-23, including another attack at the al-Tuwal crossing that was reportedly thwarted on July 22.

Five days in a row of such cross-border attacks certainly represents an uptick of violence, particularly given the more severe nature of some of the incidents. This may be attributed to an interest by Houthi and pro-Saleh forces in presenting a show of strength amid substantial losses in Aden and reports of continued advances by anti-Houthi forces in the Lahij Governorate.

That being said, cross-border incidents appear to be relatively routine in the border area, even if one takes into account the drastically different pictures presented by opposing sides.

The majority of the incidents reported about in Saudi media, including social media sources that claim to be based in these southern areas, occur quite near the border area. Dhahran al-Janub, for example, which saw material damage result from shelling on July 21 is less than 15 kilometers from the border with Yemen. There are some projectiles that cause casualties and/or material damage, usually when they hit population centers, while others (many) land in underpopulated areas or open spaces. Reports indicate that “dozens” of civilians and military personnel have been killed in such incidents, but in the context of the apparent frequency of cross-border fire and length of the conflict, this is a relatively low number.

On the other hand, Houthi-affiliated media like Al-Masirah TV issues multiple claims each day regarding the successful targeting of southern Saudi Arabia. While largely involving the firing of mortars and rockets, this has also included videos allegedly depicting the entrance of fighters into Saudi territory near the border. Some clearly corresponds to those reported by Saudi sources, while others remain uncorroborated.

Iran, for its part, reiterates many of or similar claims. A July 20 report from FARS News, for example, alleges that Houthis launched “several rockets” at the southern Jazan Province, successfully destroying a “Saudi army tower” and resulting in “large groups of Saudi soldiers los[ing] their lives in the attacks.” According to the report, “missile attacks” also targeted a Saudi base in the Najran Province. An Al-Alam report from July 18 claimed that no less than six military bases in southern Saudi Arabia had been successfully hit and/or “fully destroyed.” Other Iranian outlets report similarly.

Aside from these reports, however, there is nothing to indicate at this time that the Houthis are in possession or capable of the kind of accuracy and sophistication necessary to persistently hit these kind of precise targets at this kind of frequency and intensity.

Such disparate presentations of the situation in the border area, including from two parties that have a clear interest in controlling how they are perceived in this conflict, creates a startlingly opaque situation. Saudi sources do report on these events, as the recent reports of attacks at the border crossing and shelling of southern territory demonstrate. But does this mean that they report all such incidents? Is Houthi media presenting a completely inaccurate situation? Likely, the reality is somewhere in the middle.

The problem with understanding precisely what is occurring in the border area is connected to what appears to be at least some form of imposed media control or blackout by Saudi authorities. Given the very high rate of social media penetration in Saudi Arabia, the limited sources that report on cross border fire outside of those accompanied by official reports seem too small a number.

What is truly notable about these events, however, is the ability of the Houthis to attack Saudi Arabia at all, regardless of whether these attacks were repelled and their accuracy, or lack thereof. While there is no clear difference between the initial Saudi Operation Decisive Storm and the current Operation Restoring Hope, the April 21 announcement of the former’s conclusion was accompanied by statements alleging that its objectives had been achieved.

These objectives included the successful removal of “threats to Saudi Arabia’s security and that of neighboring countries.” Continued fire into the country’s southern border areas, even if largely inaccurate, and the multiple deaths reported since this announcement indicate that the threats to Saudi security are anything but completely removed. Rather, amid multiple and daily air strikes across Yemen, with the northern areas seeing some of the highest frequency, the ability to fire regularly into Saudi territory underlines the difficulty, if not impossibility, of ridding itself of such “threats to [its] security.”