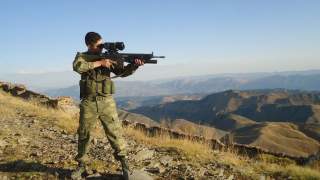 In mid-April of 2003, two weeks after the U.S. 173rd paratroop division had taken Kirkuk, eleven Turkish men were detained by American forces near the city. They were Turkish special forces dressed as civilians but carrying AK-47s and body-armor. “They did not come here with a pure heart,” U.S. commander Col. Bill Mayville told reporters. “Their objective is to create an environment that can be used by Turkey to send a large peacekeeping force into Kirkuk.” The headline in Time magazine described the event as “The Turks Enter Iraq.” Thirteen years later, the Turkish presence is as robust as ever and seeks to influence post-ISIS Iraq.

Over the years Turkey has been accused of “invading” northern Iraq numerous times, most recently by the Iraqi government of Prime Minister Haider al-Abadi, which has threatened to take Turkey to the UN Security Council over its role in the war against Islamic State. A more careful reading of history reveals that Turkey has a long history in northern Iraq; it didn’t “enter” the north so much as remain there in one form or another since the Ottoman Empire lost its Iraqi dominions to the British in 1918. Turkey’s role has also progressed through various stages of influence, from seeking outright annexation of the north in the 1920s, to establishing bases aimed at fighting the Kurdistan Workers Party (PKK) in the 1990s, to expanding influence among Turkmen minorities and seeking to support Sunni Arab demands for a post-ISIS Mosul today. Over time the Turks have also progressed through stages of alliance and contretemps with various groups in Iraq, including Kurds, Arabs, the Americans and the central government. Today, Turkey may be one of the central counterbalancing factors to the Iranian role in Iraq.

Mosul had been the capital of an Ottoman imperial vilayet, or province, in what is now northern Iraq. Under the Sykes-Picot agreement of 1916, much of this area was briefly included in a French sphere of influence. Iraq’s King Faisal and his British allies sought to keep Mosul and the Kurdish region part of Iraq. “I consider that it is impossible, both strategically and economically, for a Government in Baghdad to live if Mosul is detached from it,” Faisal wrote in 1925. Despite Turkish protests in the 1920s, the League of Nations agreed with the British, and Iraq ended up with its present 206-mile border with Turkey. Of interest today is the fact that the Sunni-led government in Baghdad saw the inclusion of the north as essential to maintaining a Sunni majority. When the Sunni Arabs around Mosul, an area that provided a high percent of Saddam-era officers, felt disenfranchised after 2003, many of them turned increasingly to radicalism.

The weakening of Saddam’s power over the north and the rise of a Kurdish autonomous region after the 1991 Gulf War alarmed the Turks. Their first concern was stopping the PKK from using the border as a staging area for recruitment and attacks. In a series of military operations involving tens of thousands of men in the mid-1990s, Turkey established a buffer zone thirty kilometers into Iraq along the border, building small military bases at Batufa, Kani Masi, Bamerni and other locations in the Kurdish region of Iraq. Turkey formed a pragmatic relationship with the Kurdistan Democratic Party at this time, based on some shared views with the PKK and also on economic issues, because Kurdistan’s trade passes through the Turkish border. Turkish trucking dominates the road leading north from Erbil to Zakho in the Kurdistan Regional Government (KRG) today.

Under the AKP government of Recep Tayyip Erdogan, Turkey became more concerned in the lead-up to the U.S.-led 2003 invasion. They wanted American guarantees of protection for the Turkmen minority in northern Iraq and a stop to PKK infiltration, while worrying that Kurdish forces, particularly those from the Patriotic Union of Kurdistan, would march on Mosul. According to journalist Charles Glass, Turkish officials in 2003 told Hoshyar Zebari, a Kurdistan Democratic Party official who would later be foreign minister of Iraq, that the Turks would consider invading Iraq if Kurdish forces moved on Mosul.

The brief detention of Turkish special forces 280 miles south of the border in April 2003 was the first indication of how deeply the Turks were operating. Three months later a second team of Turkish special forces were detained by American forces near Kirkuk. “The Turks are showing that they have an interest up there,” Judith Yaphe of the National Defense University told the Guardian.

The Shia-led Iraqi government of Nuri al-Maliki became more antagonistic to the Turkish presence, describing Turkey as an “enemy” in 2013. In February 2008, after a series of large-scale Turkish raids along the border, the government condemned Turkish “unilateral military action.” Kurdish politicians such as Falah Mustafa also opposed the Turkish role, but knew there was little the KRG could do about it.

In a foreshadowing of things to come, Turkey gave refuge in 2012 to Iraqi vice president Tariq al-Hashimi, a Sunni politician sentenced to death in Baghdad in 2011. Turkey also forged relations with Iraq’s Sunni speaker of parliament, Osama al-Nujaifi. When ISIS invaded Iraq in June of 2014 and the Iraqi army fled from Mosul, Atheel al-Nujaifi, Osama’s brother, found refuge in Erbil with support from Turkey. He established a mostly Sunni Arab militia called Hashd al-Watani made up of refugees from Mosul and commanded by some officers who had experience from the pre-2003 Iraqi army.

The collapse of Nuri al-Maliki’s Iraqi army in 2014 paved the way for the Turkish decision to aid Iraqi Sunnis to help retake Mosul. They established a modern training base at Bashiqa, around twenty miles east of Mosul, just behind the peshmerga-held frontlines. This is part of a wider Turkish policy of propping up Sunni rebel groups in Syria and can be seen as an outgrowth of the neo-Ottomanism of Erdogan’s foreign minister and former prime minister, Ahmet Davutoğlu. In December 2015, when Iraq’s central government first demanded the withdrawal of Turkish forces, Davutoğlu defended the training camp as aiding “local volunteers fighting terrorism.”

According to Can Kasapoglu and Soner Cagaptay in an article for the Washington Institute for Near East Policy, there are up to three thousand Turkish soldiers in Iraq, which includes “a robust commando battalion and tanks” in Bashiqa. These forces are not part of the U.S.-led Combined Joint Task Force – Operation Inherent Resolve. Coalition spokesman John Dorrian clarified that in early October, saying the Turks were “on their own.” But the reality on the ground is more complex. During a visit to Bashiqa in July of this year, it was clear the Turkish forces are highly professional and have performed excellently in suppressing ISIS mortar fire and attempts to attack the front line. Turkish artillery and tanks operate in close proximity with Kurdish peshmerga and coalition special forces that are fighting ISIS. It is less clear if the thousands of Arabs they are training are ready for front-line duty on their own.

Turkish prime minister Binali Yildirim told reporters on October 6 that the Turkish presence would “continue to ensure demographic stability.” “The presence of Turkish forces near Bashiq [sic] ensures the people of Mosul against the violations of some militias,” Atheel al-Nujaifi told Kurdistan24. The comments of the Turks and their Sunni allies in Iraq show that Turkey is committed to protecting Sunni interests in the north, primarily against Shia militias. There are already almost a million refugees from around Mosul; Turkey does not want the city to be destroyed the way Sunni Ramadi and Fallujah were.

This dovetails with a larger grand strategy of standing up to Iranian influence in Syria and Iraq. Kurdish politicians in Erbil have been speaking about a referendum on independence and supporting an autonomous “Sunnistan” in northern Iraq after ISIS is defeated. Since Mosul and the mostly Turkmen town of Tal Afar were centers of extremist activity after 2003, its clear that without a solution to Sunni resentment of the Shia-led government’s power, the area around Mosul will continue to be unstable even if the Iraqi army does take Mosul. With the Turks adamant on influencing the outcome of the battle for Mosul, Turkey may finally have the role in northern Iraq it sought to hold almost one hundred years ago.