What's Wrong with Both Sides of the North Korea Debate 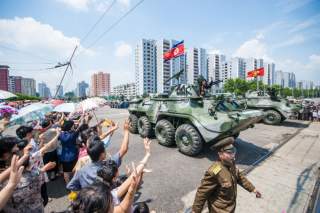 Pyongyang’s recent nuclear and missile tests have reignited the North Korea policy debate, generating a sense of “do-somethingism” that pervades Washington policy circles. Recent op-eds (such as those by Jane Harman and James Person, and Mike Mullen and Sam Nunn, both in the Washington Post) reflect this alarm-filled sense of desperation.

The spectrum of policy arguments runs the gamut from calls for more generous concessions and negotiating a peace treaty on one end, to calls for “preemption” and “regime change” on the other. But the rumblings from both sides of the debate suffer from historical amnesia, are factually challenged and display flawed strategic logic.

Missing from all these well-intentioned efforts at finding a solution is any learning curve from more than two decades of diplomacy by both Republican and Democratic presidents since 1991. There appears to be little appreciation of diplomatic efforts aimed at North Korea’s denuclearization or of the myriad documents diplomats have produced: the Joint Declaration on Denuclearization of 1991; the Agreement on Reconciliation, Non-Aggression, and Exchanges and Cooperation; the Agreed Framework of 1994; the Perry Process of the late 1990s (the search for a grand bargain); the China–U.S.–North Korea talks in 2004; the Six-Party Agreement of September 2005; and the 2012 Leap Day Agreement (the search for a mini-bargain).

Each represented good faith efforts and incentives to get Pyongyang to say “yes” to denuclearization. Each, as Harman asked, considered North Korea’s concerns. Yet in each instance, Pyongyang found a way to say “no.”

Yes, engaging China to engage North Korea is a good idea—but that track has been actively pursued for years. China itself led the Six-Party talks, and successive U.S. administrations have made countless efforts to persuade China to use its leverage on North Korea. Unfortunately, Beijing has been reluctant to consider any official dialogue on the future of the peninsula, concerned with upsetting Pyongyang about a peninsula in which it clearly does not have a future. China has a similar opposition to a nuclear North Korea as the United States, but different priorities. For China, it is “no collapse, no war, no nukes”; for the United States, South Korea and Japan, it is “no nukes, no war.” Thus, calls for China to fully withdraw its economic support enabling North Korea fall on deaf ears.

Some policy entrepreneurs urge a “comprehensive package” with “new and genuine incentives.” But short of ending the U.S.–South Korean alliance and withdrawing U.S. troops from the peninsula, it is difficult to conceive of any “new and genuine” offer that has not already been put on the table.

The diplomacy of the past quarter-century is the record of a tireless search for a comprehensive deal, a Chinese menu of security, diplomatic and economic benefits that would accrue to North Korea if it agreed to denuclearization. None more so than the September 2005 Six-Party Agreement, which included a peace treaty in the context of denuclearization, economic and energy aid, security guarantees, and normalized relations with the United States. Yet, each time, Pyongyang has made clear by its actions that it is not interested in buying what we’re selling. Now, an offer to pull U.S. troops off the peninsula or other good-faith gestures would only be read as signs of weakness.

As for the United States signing a peace treaty with North Korea to which South Korea is a party, it is important to recall that Pyongyang has consistently refused to recognize the legitimacy of the Republic of Korea. But beyond that hurdle, a peace treaty should ratify an actual state of peace. That is a step-by-step process of reducing both nuclear and conventional forces. We are far from that end state today—and the idea of a piece of paper declaring peace, a new Kellogg-Briand treaty with a nuclear-armed North Korea, borders on fantasy.

Pyongyang would likely welcome talks on a freeze of its nuclear and missile programs, and it is worth exploring. But the price of a freeze would almost certainly be recognition as a nuclear state (they want to be Pakistan) and an easing of sanctions—if it could be verified by the IAEA. But recall that the 2005 agreement unraveled over Pyongyang’s objections to full verification, not to mention destroying the nonproliferation treaty. And, if we were to abandon our sanctions regime, what leverage would we have to guarantee North Korea’s compliance?

Arguing that sanctions don’t work is, at best, premature. Compared to the sanctions against Iran prior to the nuclear deal, those against Pyongyang are modest. Remove their access to the international financial system, as was done to Tehran, and let’s see what unfolds inside the opaque regime twelve to eighteen months later.

At the other end of the spectrum, unrealistic calls for preemption and regime change are also surfacing. In regard to preemption: first, Seoul is within artillery range of the DMZ. North Korea has some 250 deployed Nodong missiles that could hit U.S. bases in North Korea and Japan, possibly with miniaturized nuclear warheads on the business end. Who wants to roll the dice? As for regime change, North Korea is a tightly run terroristic state with no known internal opposition forces or obvious factions within the elite. It is difficult to conceive of any viable option that would not end in chaos or failure. Be careful what you wish for; you just might get it.

We agree that North Korea’s accelerating nuclear and missile programs will pose a significant challenge to the administration that takes office on January 20, 2017. Americans tend to think that all problems have solutions, if only the right policy is employed. But some problems can only be managed.

As philosopher George Santayana said, “Those who do not remember the past are condemned to repeat it.” Our recent history with North Korea reprises the classic Peanuts cartoon, where every fall, Lucy would hold the football for Charlie Brown to kick, and then at the last second, pull the ball away—leaving Charlie flat on his back. Sound familiar?

Robert A Manning is a Senior Fellow at the Atlantic Council. James J. Przystup is a Senior Fellow at the Institute for National Strategic Studies at the National Defense University. The views represented in this article are theirs alone and do not represent the views or policies of the Atlantic Council or the National Defense University.