When a Collapsing, Paranoid North Korea Turns to Nukes. . . 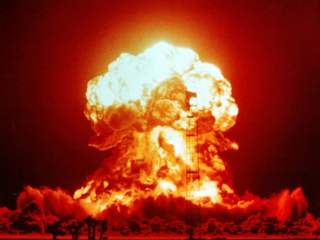 On February 7, North Korea conducted another long-range missile test, disguised as a satellite launch. The test comes after a nuclear test on January 6 and a submarine-launched ballistic missile (SLBM) test in December of last year, indicating that the Kim Jong-un regime is intent on developing a secure and deliverable nuclear deterrent. If the regime achieves its objective, North Korea could become the most dangerous nuclear-weapons state in the world, not because the Kim regime is irrational, but because North Korea is the only existing nuclear-weapons state that could conceivably collapse at any moment. Then, U.S. policy makers will have to ask a very, very uncomfortable question: Should the United States come to terms with North Korea as a nuclear-weapons state and seek détente?

The conventional logic with regard to nuclear deterrence rests on the principle that states are rational, care about self-preservation above all, and will not willingly commit suicide by attacking another state capable of exacting devastating retaliation. The general idea behind this school is that the destructive potential of nuclear weapons would more or less prevent their use and would reduce, if not eliminate, a state’s incentive to start or escalate a destructive conflict. History has so far backed this argument. To be sure, there were the Berlin crises culminating in the Cuban missile crisis, the Able Archer exercise, the India-Pakistan crises and others, which nearly resulted in nuclear wars. Humanity may have been fortunate, rather than wise, with these crises. But strictly speaking, the fact is that nuclear deterrence, at least in today’s world with a small number of nuclear-weapons states, has stood its ground so far.

According to this principle, North Korea should not be much of a threat. After all, Pyongyang’s motive for seeking a secure and deliverable nuclear arsenal is security, as the North Koreans themselves have stated many times. Of course, the Kim regime might launch provocations and even increase them with better nuclear capabilities. According to the logic of nuclear deterrence, however, Pyongyang will make rational calculations and will never escalate to a point where the regime would critically endanger its own security. Moreover, given North Korea’s military and economic weakness, the country is in no shape to expand beyond its borders. Unlike China, for example, North Korea will never become a potential regional hegemon or a serious competitor to the United States.

But North Korea is not an ordinary nuclear-weapons state. The country is the only existing nuclear-weapons state that could see a sudden internal collapse. Critics might argue that predictions about the regime’s demise have been wrong before, but this logic does not stand: the fact that an event has not happened yet does not mean that the event will never happen. Indeed, the Iranian revolution began on January 7, 1978—one week after Jimmy Carter touted the country as “an island of stability.” How about the Soviet Union, which Robert Gates, during the 1980s, said would never collapse during his or his children’s lifetime? Then there is the Arab Spring, which caught the entire world by surprise. The common theme from these cases is that regime instability could manifest itself before analysts realize that it might be possible. Only with hindsight, can one point out why these uprisings happened at the time of their occurrence.

One consequence of the black market phenomenon has been that North Korean millennials, the “black-market generation,” are more independent-minded, entrepreneurial and feel less bound to the Kim regime compared to previous North Korean generations. The formative experiences of the black-market generation are the famine of the 1990s and the experience of pioneering ways to survive without state assistance. According to one millennial defector, Yeonmi Park, her generation is “not really worshipping the Kim regime sincerely [but is] just pretending.” North Koreans today also understand more about the outside world than ever before, with South Korean DVDs and USBs flooding North Korea’s black market. These trends are occurring out of the Kim regime’s control, are irreversible and do not bode well for the stability of the North Korean state.

Sure, the regime is experimenting with economic “reforms,” for example, by giving individuals more control and adding more market-driven salaries, but these measures might not save the regime. These adjustments might help the North Korean economy, but could also carry significant political risks and are likely driven, at least partially, by the need to accommodate and bring the already sprawling unsanctioned market activities under the regime’s control. For example, Pyongyang was more or less forced to legalize fifty-dollar portable media players, called Notels, in 2014. Ordinary North Koreans often use the devices to view illegally obtained media. The legalization was possible, not because the Kim regime has become more benign, but because the regime had failed to crack down on the possession of the devices and wanted to find a way to regulate their use. The ongoing economic adjustments in North Korea might reflect the Kim regime’s gradual and inevitable loss of control over the country’s economy and society, rather than the regime’s intent to truly reform.

In the long run, the Kim regime might also come apart at the top, given Kim Jong-un’s youth and lack of experience. Kim Jong-un has executed at least seventy top-level officials since coming to power, while his father, Kim Jong-il, only executed about ten during his first few years in power. Since late 2011, approximately 20 to 30 percent of North Korea’s top officials and 40 percent of its top military officers were “replaced,” according to South Korea’s National Intelligence Service (NIS). A truly secure leader would have no need to purge so many top officials. As a result of Kim Jong-un’s reign of terror, loyalty to the Kim family has been slipping,  according to the NIS, and North Korean officials stationed in foreign countries have been seeking asylum. The purges might eventually end up endangering Kim’s hold on power. Many within North Korea’s leadership might fear that they could be next to be executed or “replaced” and might decide to make dangerous and destabilizing moves against the regime or even the leader himself to preempt such outcomes. Given all these factors at the elite, social and economic levels, the question relevant to North Korea’s collapse is not whether, but when.

Will the logic of nuclear deterrence apply to a collapsing, paranoid North Korea? In case of such a scenario and following chaos, can the Kim regime be counted on to retain proper command and control of its nuclear weapons? Will the top leadership receive accurate information and assessment regarding international and domestic conditions during a period of internal chaos and instability, particularly with regard to U.S. and South Korean moves and intentions? Will the Kim regime’s calculations with regard to using nuclear weapons change if the regime comes to believe that its demise is inevitable and becomes desperate? What if, in such a situation, the question facing the regime is how it falls, not whether? Will such a suicidal regime that has nothing to lose perhaps contemplate murder-suicide and decide to go out with a “bang instead of a whimper,” or make a desperate attempt to turn the situation around based on overoptimistic calculations or a sense of honor, as Imperial Japan sought to do with the attack on Pearl Harbor? These are all-too-important questions worth pondering.

In a collapse scenario, the Kim regime will also be making decisions under enormous psychological pressure and with a great sense of paranoia. The regime understandably sees the United States as bent on seeking regime change in North Korea. The regime also fears that the collapse of the country and implosion of the Kim family’s cult of personality might not only mean loss of power, but loss of life, as with the cases of Iraq’s Saddam Hussein and Libya’s Muammar Gaddafi. According to Andrei N. Lankov in his book, The Real North Korea: Life and Politics in the Failed Stalinist Utopia, a North Korean bureaucrat once said: “The human rights and the like might be a great idea, but if we start explaining it to our people, we will be killed in no time.” Given the uniquely brutal nature of North Korea’s totalitarianism, such sentiments are only rational. During a collapse scenario, these psychological factors could greatly increase room for miscalculation or misperception for the Kim regime, particularly if it loses hope for survival and lacks access to reliable information, creating an environment that might even lead to the accidental launch of nuclear-tipped missiles. If stable nuclear-weapons states had come close to using nuclear weapons multiple times before, what might a collapsing, paranoid North Korea do with its arsenal?