When Did Peking Become Beijing and Persia Become Iran? We Have the Data 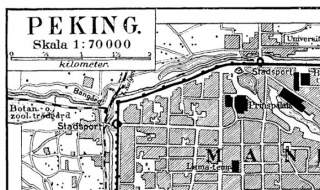 What’s in a name? Place names often change, and those changes stem from a tangle of politics and language. A fun tool from Google, the Ngram Viewer, lets us watch those changes play out across history. The Ngram Viewer charts how often a particular word appears in some five million books digitized as part of the Google Books project. It lets us see the popularity of terms across a long period, from 1800 to 2008.

So, for example, we can see that the government of Myanmar has been very unsuccessful in getting English speakers to stop calling it Burma:

The country has been trying to get others to call it that since 1989. Its neighbor Thailand shows how hard it can be to change names—especially when you switch back and forth. Thailand was Siam until 1939—and then was Siam again from 1945 to 1949. But it wasn’t until 1953 that “Thailand” passed “Siam” in English writing:

Other countries have had more successful switchovers. Upper Volta became Burkina Faso in 1984, when its president decided to drop the country’s colonial name and build a name with words from its two most common languages in a gesture of national harmony. “Burkina Faso” zoomed ahead of “Upper Volta” by 1987:

Similarly, “Ghana” quickly took over from “Gold Coast” when the latter became the former in 1957:

and “Zimbabwe” passed “Rhodesia” in 1984, four years after its independence. Zimbabwe has had many names—it was “Southern Rhodesia,” a British colony, until 1965 (briefly becoming part of the broader the Central African Federation, another colonial entity), when it became the unrecognized state of Rhodesia, ruled by the white minority; the civil war that resulted from the tensions between colonial rule, minority rule and African nationalism would lead to the country eventually becoming Zimbabwe in 1980, after a brief stint as “Zimbabwe Rhodesia” (for seven months in 1979) and as the colonial “Southern Rhodesia” again (for four months in 1979 and 1980, as the British took over to ease the transition to independence). These latter two names never really took off:

Independence from colonization thus seems to provide a clean break that lets one name quickly surpass another. (Zaire/Congo is one exception.) Yet what happens when a country isn’t truly a colony? There are many places that foreigners referred to by a name the locals would find rare or unfamiliar—and the use of that foreign name reflected the foreigners’ relative power. Iran is an excellent example of this. While never fully colonized in the way neighbors like Iraq or Pakistan were, it frequently suffered manipulation and outright invasion by foreign powers—Britain and Russia for most of its modern history, but America did its share of manipulating too. And while Iran was “Iran” to its people, it had been known to Westerners as “Persia” since the days of the ancient Greeks. In 1935, Reza Shah (himself a product of the quasi-colonial Cossack Brigade) announced that the country should be known as “Iran” in official contexts; implementation came

“Persia” still remains very common, though, especially in discussion of Persian/Iranian culture; Iranian American comedian Maz Jobrani has joked that some Iranians refer to themselves as Persians to confuse those who find “Iran” threatening. And the name of Iran’s most common language gets drawn into similar controversy: Is it “Persian,” as it’s long been known in English, or “Farsi,” the language’s own word for itself?

Ethiopia had a similar problem: it was only briefly colonized, which meant that its Western name—“Abyssinia”—took a long time to die out. Ironically, it was during the brief Italian rule of Ethiopia that “Abyssinia” finally dipped below “Ethiopia” for good.

But colonialism isn’t the only cause of confusion. The Netherlands, a very Western country and even a colonial power in their own right, have long been called “Holland” by outsiders, even though Holland is a small part of the Netherlands as a whole. Correcting the misnomer has been a long, slow struggle, with “Netherlands” only passing “Holland” in 1981:

And, of course, sometimes countries names change as the countries themselves change. The modern Czech Republic came into being in 1993, after the breakup of Czechoslovakia, which had existed for most of the twentieth century. (The Slovaks were briefly given their own state by the Nazis during the Second World War.) And previously, the Czech nation had been known as Bohemia. “Czechoslovakia” promptly fell out of use after the state’s final separation; note also that the German attempt to brand the Czech lands “Bohemia” (and Moravia) during their occupation was largely unsuccessful:

History can cast a long shadow over a country’s popular image. Tunisia, for example, still struggles with its Carthaginian past. But there’s no clearer case of this than Russia. “Russia” was more common than “Soviet” until 1947—three decades after the October Revolution. And “Soviet,” in turn, lingered on as the more common term until 2008—seventeen years after the Soviet Union had ceased to exist. Both of these endurances matter. In spite of Soviet propaganda of multicultural unity under the red banner of Communism, the English-speaking world still saw something Russian about the young empire—a reasonable impression given the deliberately amplified role of ethnic Russians in the governments of the other Soviet republics. And modern Russia, in turn, has a complicated relationship with its Soviet past. It embraces the Soviet effort in the Second World War yet distances itself from many Soviet actions—see, for example, Vladimir Putin’s condemnation of the Soviet transfers of land from the Russian SFSR to the Ukrainian SSR during a recent address—and from the notion that it intends to restore the Soviet empire. Soviet themes have figured prominently in many non-Russian depictions of the Ukraine crisis—and hawks mistakenly calling Russia the “Soviet Union” have become something of a trope. Yet a full Russian revival would surely see the modern state become a much more popular subject than the Soviets in English writing; that this hadn’t happened yet when the Ngram data set ends in 2008 would suggest Moscow has a long way to go before it fully emerges from the Soviet umbra.

It isn’t just countries whose names change. Cities change too; you don’t need to get new letterhead for your whole country if you just swap a few cities around. “Istanbul” is still less common than “Constantinople” more than five hundred years after the the city fell to the Muslims:

And Slovenia’s capital Ljubljana was the rather more pronounceable “Laibach”:

Zagreb quickly took on its native name after the old Habsburg empire was carved up after World War I; Ljubljana took longer. (This effect is repeated in German: “Zagreb” passes “Agram” in 1948; “Laibach” is ahead of “Ljubljana” until 1966.) Not every old Austrian possession is so lucky: Praha—“Prag” in German, “Prague” in French and then English—has never taken off. But in another twist, the capital of Austro-Hungarian Germanness, Wien, is still “Vienna” to English speakers, and something closer to “Vienna” than “Wien”

Few cities have been renamed more times than Saint Petersburg in Russia, and rarely has it been more political. That’s fitting, since the city itself is an intentional political creation, having been built around an old Swedish fort at the orders of Peter the Great in 1703. The Germanic elements of its name (it’s Sankt Peterburg in Russian) were dropped as Russia fought Germany in World War I, making it Petrograd. The death of Bolshevik leader Vladimir Lenin a decade later saw the city become Leningrad; the fall of the Soviet Union saw it become St. Petersburg once more. And in both Russian and English, the “Saint” comes and goes. English speakers took a long time to warm to “Leningrad,” preferring “Petrograd” until 1939:

Russian speakers, meanwhile, never really gave up on the city’s original name; “Petrograd” never dominated, “Leningrad” took thirty-five years to catch on and was being abandoned even before the city was officially renamed:

Eastern cities have long been particularly tough for English speakers, with Anglicized names hard to eradicate. For most, Mumbai is still Bombay, Kolkata is still Calcutta and Yangon is still Rangoon. The Communist authorities in Vietnam have struggled to get their subjects to call Saigon “Ho Chi Minh City,” its official name since 1975; their efforts have been even less successful in English. Tehran was outbid by the odd “Teheran” until just before the Islamic Revolution:

“Teheran” will presumably see a bit of a comeback in the next few years thanks to professional baseball player Julio Teherán, who was born Colombia and has no Iranian heritage I’m aware of. But one of the oddest cases is Beijing and Nanjing, the historical northern and southern capitals of China. Both cities have had a