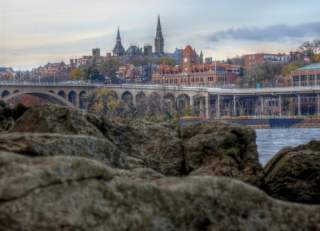 “I REALLY hate this city,” wrote Joseph Alsop, the legendary newspaper columnist and Washington bon vivant, in the spring of 1974. And with good reason: the capital in which Alsop and his brother and coauthor, Stewart, had for twenty-five years exercised outsized influence—as hosts to, and confidants of, the nation’s elite politicians, generals, spymasters and fellow journalists—had quietly vanished.

In its heyday, the Alsops’ world was a cloistered place, not untouched by rancor or partisanship but still governed by old-school WASP manners and aspirations for postwar America that were broadly shared across the ideological spectrum. It functioned as an unusual hybrid of court society and literary commune, its denizens given to elegant Sunday-night dinners, decades-long debates about international affairs and democratic values, and petty personal feuds resolved by the penning of heartfelt letters of apology, mailed to recipients who might have lived all of six blocks away.

This is the bygone kingdom, as fabled and dead as Atlantis, to which Gregg Herken returns us in The Georgetown Set. A gifted historian, Herken is the author of several well-regarded books about the politics and science of the atomic age. His progression to this terrain seems natural, if not inevitable. Surely no one is better suited to the material; the source notes include entries like “Author interview with Paul Nitze, July 12, 1984.”

In assaying the chummy crowd of accomplished and vainglorious Washingtonians who consorted with the Alsops inside their Dumbarton Street maisonettes, and who in turn fed the brothers’ hawkish columns, Herken conjures with skill and style those fretful years when America’s nuclear standoff with the Soviet Union lurched from containment to confrontation, and the heightened stakes overseas plunged the nation’s political classes into paranoia at home. Authoritative and reverential, The Georgetown Set joins the ranks of other accomplished “group portraits” of the Cold War, a genre distinguished by Evan Thomas and Walter Isaacson’s The Wise Men, Burton Hersh’s The Old Boys and Thomas’s The Very Best Men.

The fact that so much of this ground has been covered before—in histories of the Cold War and the CIA, and in biographies like Robert W. Merry’s definitive study of the Alsops, Taking on the World, and John Lewis Gaddis’s Pulitzer Prize–winning George F. Kennan: An American Life—is not the principal flaw of this volume. Rather, it is in the “group” construct itself, which, at least in these pages, leads to a scattered approach: a narrative only loosely held together by lines of friendship so tangled and overlapping that they confuse rather than clarify. Indeed, The Georgetown Set is probably the best-researched and best-written Bad Read I’ve ever read. The gang’s all here, to an extent that some paragraphs induce vertigo:

Tom Braden, former Jedburgh and Stewart Alsop’s close friend and co-author, had joined the agency in 1950 as a patriotic response to the Korean war. Braden was made head of the CIA’s International Organizations Division, which secretly funneled money to trade unions and freedom committees overseas. Another Jed veteran, and Frank Wisner’s former law partner, was Tracy Barnes. Wisner put Barnes in charge of psychological and paramilitary warfare. Shortly after Korea, the ex-marine Phil Geyelin also joined Wisner in OPC’s sweltering “tempos” on the Mall. (Geyelin lasted less than a year, however, before embarking on a journalism career that took him to The Wall Street Journal and eventually The Washington Post.) Another recruit, Desmond FitzGerald, was the divorced husband of Susan Mary’s longtime friend and correspondent, Marietta Peabody. FitzGerald’s Harvard roommate, Paul Nitze, had introduced Desie to Frank Wisner. An army veteran with wartime experience in China and Burma, FitzGerald was put in charge of the Far East division of the Plans Directorate.

Compounding this problem is the author’s abdication of a signal responsibility of the portraitist: to provide compelling physical descriptions of the characters. Seldom do we get a good idea of what anyone looks like, and how an individual’s appearance would have affected his comportment and treatment by peers. In the chapter, for example, that introduces us to Frank Wisner, the Office of Strategic Services veteran and Wall Street lawyer who helped build the modern CIA, fifteen pages pass before Herken makes hurried reference, seemingly as an afterthought, to “the growing-portly, rapidly balding Wisner.” And this is only for the purpose of contrasting Wisner’s appearance with that of Richard Helms, the career CIA man who would lead the agency from 1966 to 1973, said here to have been “tall, handsome [and] debonair”—a description that still gives the unknowing reader scant ability to conjure Helms’s face.

This construct mandates that we repeatedly check in with multiple players whose paths never really converge in a climactic way—as they might, say, in a spy novel. The result is that the narrative often feels digressive. The introduction of George Kennan leads to a miniature history of the Policy Planning Staff, the State Department’s in-house think tank; the recurring focus on Wisner produces long passages on the birth of the Office of Policy Coordination, the CIA’s earliest clandestine branch, and a long-forgotten operation in Albania. Georgetown itself, the supposed epicenter of the characters’ thoughts and actions, disappears for tens of pages at a time.

NOR DO we ever really penetrate the sanctum sanctorum of the Georgetown set: the cocktail parties and dinners said to have been so grand, so lively and so influential. The book begins with a quote from Henry Kissinger, the one figure of the Nixon administration who enjoyed entrée to capital society, and perhaps the last individual over whom the Georgetown set, in its waning days, saw fit to fawn. “The hand that mixes the Georgetown martini,” said Kissinger, “is time and again the hand that guides the destiny of the Western world.” But by failing to escort the reader into such gaieties, The Georgetown Set is never really present at the creation—of either the martini or the destiny.

Combing the extant literature—the histories, memoirs, articles, letters, diaries and his own interviews—Herken has diligently unearthed, and woven into the narrative, every known reference to this or that gathering, held at this or that home on Q or 34th Street, where Subject A or B was discussed, and Set Member C or D famously clashed with Arthur Schlesinger or Kay Graham over policy X or Y. Never, however, do we experience one of these Georgetown salons with intimacy. No specific gathering, epic or routine, is examined in detail from start to finish, nor is there any sustained attention to physical layout, decor, cuisine, table settings, the progression of the courses, clothing or manners of speech.

These are the kinds of status details that Tom Wolfe, for example, delivered so brilliantly in Radical Chic & Mau-Mauing the Flak Catchers, when he took the reader inside Leonard Bernstein’s penthouse duplex for an infamous, and thoroughly absurd, fundraiser for the Black Panthers. Wolfe, of course, having crashed the Bernstein party, was practicing eyewitness journalism, whereas Herken is saddled, decades after the fact, with the rather more difficult task of historical re-creation. But the wealth of private and public literature produced by the members of the Georgetown set, and Herken’s probing interviews with their children, should have made it feasible—had it been the author’s objective—to give the reader a sensory perception of one such party, or their feel in general: of what it was like, back in the day, to enter one of these splendid Georgetown homes; to have your coat taken by a butler; to receive your drink; to repair to an anteroom for banter before dinner; to converge on the dining-room table; and so on.

And because Herken’s raw material is so fragmented—a reference to parties or discussions here or there, but no sustained set pieces—the author’s segues from one subject to the next can feel forced. Consider this passage, in which Herken seeks to transition from McCarthyism, one of the topics broached during a gathering at the O Street home of Jane and Bob Joyce in July 1950, to Kennan’s brief exile to Princeton University:

Preparing to leave for Princeton’s institute, Kennan was in the process of saying good-bye to his Georgetown friends. Yet the dinner conversation that night was not about Kennan’s impending departure but about McCarthy’s rising star. Stewart let Kennan know that he intended to use parts of the latter’s Milwaukee speech in his forthcoming essay—confessing surprise “that the Post had consented to take an article so strongly anti-McCarthy.”

The conversation then turned to another topic: Kennan’s legacy as he left Washington.

Kennan had recently met with Frank Wisner to discuss a report the two men had just received from Joyce. It concerned Operation Rusty, the CIA’s project to encourage Red Army defections, which had used Gustav Hilger as a consultant. Joyce based his report on the interrogation of ten Russian soldiers who had recently escaped to the West after listening to a VOA broadcast promising that defectors would not be returned to Soviet authorities. Kennan wrote in his diary of how he had been cheered by the news.