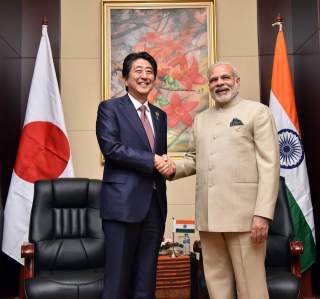 Like every news event that shared last week with the U.S. presidential elections, Indian prime minister Narendra Modi’s visit to Japan was swallowed up by American electoral headlines. What attention his summit with Japanese prime minister Shinzo Abe did attract centered on the consummation of a long-pending nuclear cooperation deal. For a host of reasons covered extensively elsewhere, the deal is symbolically and practically significant for both countries.

This article is more concerned with what the Modi-Abe summit tells us about the increasingly robust strategic and defense partnership being forged by Asia’s democratic heavyweights, and how the summit advanced that partnership in several key areas.

Beyond the nuclear deal, the big-ticket takeaway from Modi’s visit was a deal to finance and construct a $15 billion Mumbai-Ahmedabad high speed rail project. Japan, which funded the lion’s share of the famed Delhi Metro, will finance 80 percent of the project with a soft loan at interest rates below 1 percent.

Japan has long been one of India’s largest aid donors and sources of foreign direct investment (FDI). Japanese FDI in India topped $17.5 billion between 2000 and 2014, with over 1,200 Japanese firms operating in India. “No nation has contributed so much to India's modernization and progress like Japan . . . And, no partner is likely to play as big a role in India's transformation as Japan,” Modi declared last year.

Bilateral trade, on the other hand, continues to underperform. In 2015–16 it reached a modest $14.51 billion, as compared with over $70 billion in India-China trade and $350 billion in Japan-China trade. As Pallavi Aiyar notes, Japan and India account for less than 2 percent of each other’s external trade, and “over the past three years Japanese firms have invested more in countries like Vietnam and Indonesia rather than India.”

Tokyo, the world’s second-largest importer of REEs, panicked. India, with only modest REE deposits of its own, is also dependent on China for at least half of the dozen REEs it has designated as “critical” for its manufacturing sector.

Japanese firms have since partnered with India on a mineral separation plant in Odisha and an REE processing plant in Andhra Pradesh. In November 2012, the two signed a trade pact allowing India to export REEs to Japan. Under a follow-up deal reached in 2014, production is expected reach two thousand tons per year, or 15 percent of Japanese demand. This year, India’s first REE exports arrived in Japan.

Earlier this year, Japan also reportedly struck a deal to construct a fifteen-megawatt diesel power plant in India’s Andaman and Nicobar Islands. Delhi has traditionally “not previously accepted offers of foreign investment” on the distant island chain strategically positioned at the mouth of the Strait of Malacca. It’s been similarly averse to foreign investment in its underdeveloped, conflict-prone northeast, which is claimed in part by China as “South Tibet.” An exception has been made for Japan, however, which is currently funding a $744 million road-building project there.

Through its “One Belt, One Road” (OBOR) initiative, China has begun showering Eurasian capitals in billions of dollars in infrastructure aid and development projects. The initiative has earned Beijing a windfall of political capital, leverage and goodwill—but it’s also raised concerns about the threat of the Chinese “debt trap” and questions about hidden strategic ambitions behind ostensibly economic projects.

Notably, India is the only South Asian country yet to officially endorse OBOR. Foreign Secretary S. Jaishankar has articulated Indian concerns about a lack of clarity and coordination from Beijing, and raised questions about the “strategic connotations” of its investments. In September, he argued “the yardstick to judge their viability should essentially be a commercial one.”

I’ve long argued that any viable alternative to OBOR would require greater policy commitment and collaboration between the United States, India and Japan, the latter of which has amassed an impressive track record wielding Official Development Assistance (ODA) abroad.

Tentative steps toward such collaboration were taken at last year’s first-ever U.S.-India-Japan trilateral ministerial-level dialogue. There the three parties endorsed a new “expert-level group” to “identify collaborative efforts that can help strengthen regional connectivity, including between South and Southeast Asia.”

During a trip to Tokyo this September, I was told of a push for infrastructure development in Africa, and that Tokyo saw India—with its established political ties on the continent—as an ideal partner and conduit for realizing that vision. Notably, the joint statement last week singled out the “importance of India-Japan dialogue to promote cooperation and collaboration in Africa.”

A Shared and Principled Regional Vision

Principles: Freedom of navigation, peaceful dispute settlement and the rule of law, specifically as reflected in the UN Convention on the Law of the Sea.

Regional Institutions: The centrality of ASEAN and the East Asia Summit (EAS).

Concepts: The Indo-Pacific as an interconnected geopolitical and economic space.

Abe was one of the earliest and most vocal proponents of the “Indo-Pacific” construct, which envisions the two oceans as an interconnected economic and geopolitical space. In December 2012, he famously called for the formation of a Democratic Security Diamond, “whereby Australia, India, Japan, and the U.S. state of Hawaii form a diamond to safeguard the maritime commons stretching from the Indian Ocean region to the western Pacific.”

Since then the Indo-Pacific concept has entered the Indian (and American) strategic lexicon with greater frequency. Last week’s joint statement explicitly “underscored the rising importance of the Indo-Pacific region as the key driver for the prosperity of the world.”

Finally, the statement noted Japan’s support for India’s membership in the Asia-Pacific Economic Cooperation forum (APEC). And it called for expeditious reform of the UN security Council, where India and Japan are both seeking permanent seats, to make the body more “legitimate, effective, and representative.”

Freedom of Navigation and the South China Sea

Recent years have witnessed growing alignment between India and Japan on South China Sea issues, the concept of freedom of navigation, the protection of Sea Lines of Communication (SLOCs) and the importance of the UN Convention on the Law of the Sea.

Delhi and Tokyo are both highly dependent on seaborne trade, including for energy imports. At last year’s Modi-Abe summit, the two noted the “critical importance of the [SLOCs] in the South China Sea for regional energy security and trade.” Last December’s Japan and India Vision 2025 Special Strategic and Global Partnership committed both sides to “hold regular close consultations on the issues related to maritime safety and security of sea lanes of communication.” The Japan Times argues SLOC security “constitutes a key driver of this Indo-Japanese nexus in the maritime domain.”

The corollary to SLOC protection is freedom of navigation, for some thinly veiled code for opposing Chinese hegemony in the South China Sea. While China insists it would never challenge commercial freedom of navigation there, it has also been clear the principle does not apply to military vessels.

Last week’s joint statement reaffirmed India and Japan’s support for freedom of navigation “as reflected notably in the United Nations Convention on the Law of the Sea.”

The explicit mention of UNCLOS assumed greater significance after a July 2016 ruling by an UNCLOS Arbitral Tribunal that, among other things, invalidated Beijing’s nebulous nine-dash-line claim over nearly the entire South China Sea. As Devirupa Mitra notes: