When the Thai King Dies 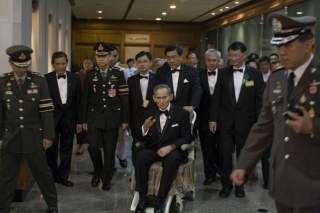 The King of Thailand is dying. The bluntness of this statement will win no friends in Thailand—as the New York Times was reminded last week when its printer there refused to publish an edition speculating on the King’s health. Yet, today, the King’s mortality is the central factor in Thai politics. It must be acknowledged directly and more fully accounted for in development of U.S. policy.

There have been a dozen successful coups in Thailand since 1932. Most of them occurred within the context of the Cold War. In those years, America’s priority was prevailing in the global competition with the Soviet Union. The United States often turned a blind eye to anti-democratic domestic politics, not only in Thailand, but in the Philippines, South Vietnam, South Korea Taiwan and elsewhere. This was generally—if not in every specific incident—necessary and appropriate in the larger strategic cause.

In 2006, at the time of Thailand’s most recent prior coup, there was no cold war, but there was another dominant strategic framework. The United States was fighting a “global war on terrorism” that included two hot wars, in Iraq and Afghanistan. Thailand was a critical intelligence, law enforcement, and military logistics node in this massive undertaking.

There is no commensurate global framework to temper America’s reaction to Thailand’s 2014 coup and subsequent military government. As a result, it is being handled much differently.

In 2006, the Bush administration limited its reaction to the ouster of Prime Minister Thaksin to what was strictly required by law: suspension of $24 million in Foreign Military Financing (FMF) and International Military Education and Training (IMET) assistance. Otherwise, ties were maintained; the schedule of the 40-50 joint U.S.-Thai exercises, including Cobra Gold, went forward undisturbed, and public criticism and entreaties regarding return to democracy were kept to a minimum.

The Obama administration has taken a much harder line on the current situation in Thailand. It suspended the more than $4.7 million in unspent FMF and IMET assistance for Thailand, but it also “cancelled high-level engagements, exercises and a number of training programs with the military and police.” With regard to the later, probably most significantly, it curtailed U.S. participation in the region’s premier multilateral military exercise, Cobra Gold, in 2015, and plans to do so again in 2016. It has also been much more publicly vocal about the state of democracy and human rights in Thailand.

The contrast is attributable to the lack of immediate apparent strategic costs. In 2006, there was no push from Washington to get tough with Thailand. The use of U-Tapao air base and Sattahip naval base for logistics support of American operations in Iraq and Afghanistan, and counterterrorism cooperation with the Thais restrained Washington’s reaction to the coup that removed Thaksin. America’s ambassador in Thailand, Skip Boyce, was given wide leeway to maintain relations with the Thai leadership. And judging by the end result—return of democracy to Thailand and preservation of cooperation and comity in the relationship—his approach worked.

Other differences between 2006 and 2014 have complicated America’s response. The military government of Gen. Prayut Chan-o-cha has been much harsher than the 2006 military government. Human Rights Watch has called the current situation a “human rights crisis.” It and many others have expressed concern for repeated delays in the schedule for new elections, now forecast for mid-2017. In 2006, there was little doubt that retired general and head of the interim government Surayud Chulanont wanted to get back to true civilian rule and elections as soon as possible.

Why the difference? Prayut is prickly and given to saying very bizarre things that minimize the value of democracy and the rights of the Thai people. But is it plausible that Prayut’s power grab is different in kind from that of Surayud, that its aim is an enduring dictatorship, something not really within his power alone to accomplish in any regard? Or, is it more likely that Prayut’s harshness is attributable to a domestic dynamic that is much more dramatic and uncertain than in 2006?

This question returns to the health of the King. King Bhumibol Adulyadej has been in power since 1946. He guided his people through the tumult that was the second half of the 20th century until today. His death will shake Thailand like nothing has in its modern history, and the Thai military wants to be firmly in charge when that happens. It is that simple.

The military is probably overestimating exactly how “firm” it needs to be. This, however, is precisely why Washington should foster the sort of environment that will allow its new Ambassador, Glyn Davies, to confidentially and effectively caution Thai officials against overreach. When someone at the level of U.S. Assistant Secretary for East Asian and Pacific Affairs visits Bangkok, it should be to consult with Thai friends on the best way forward; not publicly hector them, as Assistant Secretary Danny Russel did in January of this year. Restoration of high level dialogue between the U.S. and Thailand that has been suspended since the coup would also help restore a level of trust appropriate to decades-long allies.

The United States has an interest in seeing democracy return to Thailand as rapidly as possible. Policy makers, however, cannot fail to appreciate that the central feature of that timetable is not the ratification of a new constitution, but the death of King Bhumibol.

This, in turn, requires a keener appreciation of the U.S.-Thai alliance. No, there is nothing on the scale of the Cold War or the Global War on Terrorism to give it strategic shape. Containing China will not fill that need, because from where the Thais sit, the story of China’s rise is a mostly positive one. Even for the United States, with its vastly greater responsibility for regional order, China’s role in the world is critical enough that it must maintain a fully functional relationship with it.

Thailand presents strategists a serious conceptual challenge that will become more pronounced in coming years, and is already beginning to emerge in other alliances, like that with South Korea. In the U.S.-Thailand alliance, the United States has a remarkable, proven capacity for cooperation, from counter-narcotics and counterterrorism operations to non-proliferation and humanitarian and disaster relief. Should this capacity be permitted to wither for lack of a Cold War, or should it be nurtured and expanded, pending new contingencies—like another American military commitment in the Middle East, an Indian Ocean tsunami, or worst case, a regional conflict of the scale we fought together with the Thais in the Vietnam and Korean War eras?

Washington needs to think much more broadly and long-term about the value of the U.S.-Thai alliance. In our justified eagerness for it to get back to democracy, we are giving short shrift to a historic transition there and the tremors that the expectations of it are creating throughout Thailand. In the process, we are squandering a valuable alliance with Mainland Southeast Asia’s most consequential player. American policy makers should stay focused on Thailand’s return to democracy, but do so in a way that keeps the doors to our counsel open and gives the Thais the space they need to come to grips with a future without their beloved King.