Where are U.S.-Iran Relations Headed? 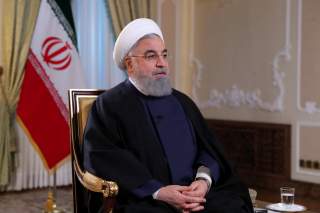 President Donald Trump indicated in mid-January that he’s extending sanctions relief to Iran for “the last time” and demanded extensive changes to the nuclear deal within the next four months. Will the deal be null and void by May? Or is there a path forward for America, Europe and an Iran that has been convulsed by protests?

Today at the Center for the National Interest, Amb. Thomas Pickering, Vice Chair of Hills & Company who holds the personal rank of Career Ambassador—the highest in the U.S. foreign service—and Reuel Marc Gerecht, a Senior Fellow at the Foundation for the Defense of Democracies, addressed these important questions. They discussed the Iran deal, the roots of the protests in Iran and how America should respond. Jacob Heilbrunn, editor of the National Interest, moderated the event.

Amb. Pickering began by focusing on the location of the protests. He emphasized that it was significant that they had started in the countryside, but did not gain as much traction in the larger towns and cities. He believes that the primary reason for the protests was rooted in economics, since the economy of Iran had improved some, but not nearly as much as had been promised by the regime in Tehran. He noted that “this set of protests went downhill faster than [the protests] in 2009,” and that they were not nearly as intense as nine years ago. Amb. Pickering pointed out that senior Iranian officials appear to have taken note of the displeasure and have made statements that Tehran may spend less on foreign policy. What policies this may entail remains to be seen. He added, “my own sense is that the JCPOA (the nuclear deal) is in the U.S. national interest to preserve.” Pickering stated that the deal was imperfect, but was preferable to none. The new Trump deadline in early May was an interesting concept to him, since he believed that the time frame may be a ploy to prompt Iran to cave to American demands and to push the United States and Europeans to cooperate more fully.

Gerecht offered a dire prognosis of the Iranian regime’s future. According to him, “the Islamic Republic has been dying since the death of Khomeini.” In his view, “the regime in Tehran has lost the college educated” who formed the backbone of the 1979 Islamic Revolution. Today, however, the government has lost their support. Gerecht noted that the driving force behind the Green movement of 2009 was the college educated. In his view, it is of the utmost significance that the most recent protests came from the provincial towns, a development that indicates the regime may be losing the support of the blue collar classes. Resentment of the regime has become ubiquitous: “millions and millions of people are tired of theocracy.”

What does this mean for the Trump administration, which signalled its support for the protesters? Gerecht agreed with Amb. Pickering that Trump was no better prepared than Obama to deal with the unrest. Gerecht was most skeptical that the Trump administration wants to become enmeshed in any kind of direct, armed conflict with Iran. Rather, he termed Trump’s impending decision about the nuclear accord a new “D-Day.”

Amb. Pickering and Mr. Gerecht differed markedly in their beliefs about what additional pressure could accomplish. Amb. Pickering believes that United States needs to use caution, since the JCPOA is the best thing that can be achieved at the moment. He feared that pushing to impose secondary sanctions on Iran would seriously undermine America’s position with its European allies and might well prompt Tehran to become more nationalistic. In short, Amb. Pickering thought that America does not stand to gain by torpedoing the nuclear deal—but has a lot to lose.

Gerecht, in contrast, took a much harder line. For one thing, he expressed skepticism that the Europeans were so eager to invest in Iran and maintained that they would stand firm with Washington. He pointed out that European banks are still reluctant to invest in the country due to financial instability and the spectre of further sanctions. He admitted that a trade war could occur due to secondary sanctions, but sees that scenario as unlikely, unless Trump plays his cards poorly. Gerecht concluded, “there is no economic coercion of the Islamic Republic without applying secondary sanctions on European banks.”

Is upping the pressure on Iran really in America’s national interest? George Beebe, the Director for Intelligence and National Security at the Center for the National Interest, asked the panelists on whether evolutionary change was the best option for Iran. He raised the possibility that pushing too hard with sanctions could lead to an unintended, and possibly more illiberal, result in Iran.

Gerecht, however, maintained that liberalization of Iran is a nonstarter. He argued that reform had already been attempted and that the election of Hassan Rouhani effectively neutered any chance of evolving out of a theocratic state. Amb. Pickering agreed with many of Gerecht’s points, but emphasized that the more the United States used force, the more that Iran’s regime was strengthened. Pickering noted that the United States is very adept at using the military option, but has a desultory record of handling the aftermath. He concluded with the acid test for American foreign policy realism: “we have to deal with what we think are our primary national interests... I can’t see regime change meeting the Truman test: U.S. survival and U.S. prosperity.”

Blake Franko is an assistant managing editor at the National Interest.