Where Does Trump Stand on South Korea? 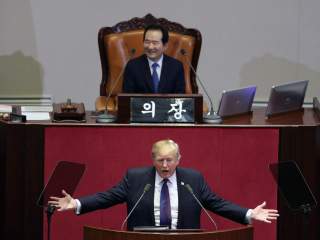 Earlier this week, for the first time in two years, North and South Korea held official high-level government talks. This diplomatic engagement could be a great opportunity—for leaders of both capitals, for their citizens who are worried about becoming collateral damage in the event of conflict, and for the stability of the whole region. However, U.S. president Donald Trump could easily blow up this chance with his provocative statements and inconsistent support for the South Korean government.

For months, Trump has been undermining diplomatic options on the Korean Peninsula. He has repeatedly escalated warmongering rhetoric. He has said that negotiating with North Korea is a waste of time. Just last month, the White House walked back Secretary of State Rex Tillerson’s commitment to talks without preconditions.

Then, at the beginning of the new year, Trump suddenly stopped pooh-poohing diplomacy. He tweeted that, “talks are good.” In a phone call with South Korean president Moon Jae-in, he expressed that the United States would be open to talks, “at the appropriate time, under the right circumstances.” While this is a welcome rhetorical shift, there is concern that it will not be a lasting one.

Whether Trump supports talks or not, almost any conversation between the two Koreas is better than none. At the least, conversation can reduce the chances of accidental conflict or avoidable military escalation. At best, such conversations are the first step towards peacefully resolving their differences.

In this case, talks (and the talks leading to these talks) got North Korea to agree to send a delegation to next month’s Olympics in Pyeongchang, South Korea; to the reopening of a military hotline; and to a commitment to hold further discussions. While still a long way from denuclearization or any other long-term strategic goal, these outcomes will mitigate tensions in the short term and pave the way for further steps.

The question, then, is whether Trump’s next tweet shatter this progress. While Trump’s stated support for this round of talks is a welcome change, his mercurial attitude and bellicose rhetoric threaten their successes. If Trump decides tomorrow to return to his tactic of threatening to rain “fire and fury” upon North Korea or asserting the size of his nuclear assets, he could derail these much-needed, delicate negotiations and alienate Seoul, an important ally.

His off-the-cuff and off-the-wall messages also weaken the foundation of the U.S.–South Korea alliance. While Trump’s executive team attempts to reassure South Korea and the world that this partnership is solid, Trump’s erratic tweets about South Korea’s strategy and push for KORUS renegotiations in the midst of crisis suggest a dangerous lack of coordination. For these inter-Korea talks to reach the best possible outcome, South Korea needs to know that it has the United States’ full support.

Trump’s inconsistency itself could be playing into Pyongyang’s strategy, strengthening their hand in the process. There is concern in the United States that the North will leverage talks with the South towards their goal of decoupling the U.S.–South Korea alliance, with asks like a reduction in U.S. military presence or the easing of UN sanctions. A reliable United States could instead limit the effectiveness of such an approach by lending credibility and heft to the South Korean negotiators.

The choices that South Korea faces in this diplomatic process are representative of the conundrum U.S. allies face with Trump’s “America First” policy: how to tackle a challenge to our shared interests while the United States acts as an unreliable team player, or even a spoiler. While Trump might believe that protecting allies’ interests is not in American interests, guaranteeing America’s national security against the threat from North Korea is impossible without the support of allies like South Korea and Japan. Will Trump try to prevent North Korea from hitting the United States with an ICBM by launching a “limited” but unilateral military strike—almost certain to escalate—and then try to manage the aftermath alone? Or will he back South Korea’s security strategy and desire to avoid war, in order to get a win for the team?

Under a different president, the United States could be trusted to support President Moon’s efforts and the broader multilateral project to guarantee stability in the Indo-Pacific. It is hard to tell if Trump’s new pro-talk stance will stick or if he will back it up with real actions in support of the South Korean government. So far, President Moon has praised Trump’s role in getting North Korea to the table—but since Trump folded so many early rounds of the diplomacy game, his pile of chips is now smaller than if he had played in earnest from the start.