Where is Georgia Headed? 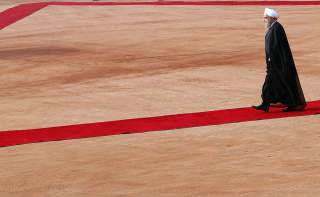 Secretary of State Pompeo May 21 stated that “Russia’s forcible invasion of Georgia is a clear violation of international peace and security,” and he called on Moscow to “withdraw its forces to pre-conflict positions.” Pompeo said President Trump “stands by the 2008 Bucharest declaration,” which affirms that Georgia “will become a member of NATO.”

Pompeo’s remarks underline the quarter-century of strong U.S. support for independent Georgia, which this month is celebrating the one hundredth anniversary of the establishment of the first Georgian Republic. A democracy, it embraced a liberal constitution and sought a European future but survived only a few years before being invaded and annexed by the USSR.

Since renewed independence in 1991, Georgia has made steady progress toward full European and Euro-Atlantic integration. Georgia has also stabilized relations with Russia, despite its 2008 invasion and continued occupation of parts of Georgian territory. Deft diplomacy and Western support have helped induce Moscow to restrain its aggressive inclinations toward Georgia. Yet Tbilisi’s Western aspirations remain unresolved and at risk.

Georgia’s continued progress requires deepened reforms, sustained Western backing for integration into Euro-Atlantic institutions, plus patience and determination. Enlargement of the family of free, democratic nations in wider Europe is being tested, especially in Georgia and Ukraine.

While Georgia’s fast track entry into NATO or the European Union is not a near-term prospect, expanded practical cooperation will buttress ties with them, for example deeper trade relations and further participation in NATO exercises. Intensified bilateral cooperation with European countries and the United States is also important. Concentrating on the practical could help Georgia strengthen its democracy, improve its economy, and increase its resilience.

In the 1990s, Georgia—beset by separatist conflicts, corruption, extreme poverty and threats from Russia—was at risk of becoming a failed state. It has overcome many of these challenges and now stands as a striking example of a reforming and Western-oriented country transcending the limitations of decades of Soviet rule.

Georgia’s location near Russia, Iran, and Turkey, its growing role as a Silk Road entrepôt connecting Europe, the Middle East, and Asia, and its place on the export route for Caspian oil and gas, underscore its importance to the Euro-Atlantic community and beyond.

Despite Russia’s military occupation of one-fifth of Georgian territory since their war in 2008, and its propaganda and disinformation aimed at sowing national disunion and undermining the state, Georgia has maintained its resolve to pursue a Western course.

Georgia has free and fair elections, a dynamic civil society, a generally free press, and space for political debate. It seeks improved ties with Russia in areas such as trade and tourism even as it refuses to recognize the Kremlin-engineered “independence” of the separatist regions of Abkhazia and South Ossetia.

Georgia could do more on its own to achieve its European and Euro-Atlantic ambitions. Overcoming political and economic vestiges of the former Soviet system—one-party dominance; weak institutions; outsized importance of individual leaders who attain their influence based on charisma, populism, or wealth—requires sustained effort.

Georgian governments have enjoyed popular backing for reforms and could leverage this to improve the political process, governance, and economic and social conditions. Support for NATO and EU membership remains steadfast. Increased participation of women in political and economic life would benefit Georgia’s democracy and social cohesion.

Georgia wants timetables for NATO and EU membership, but these are unlikely to emerge in the near term. The country could bolster its case for membership by advancing practical engagement with Euro-Atlantic institutions, such as participation in more NATO military exercises and increased economic ties with the EU. The prospect of ever closer ties with NATO and the EU could be crucial to maintaining popular support for sometimes painful but beneficial economic and political reforms.

As Georgia does the heavy lifting, the West has an interest in keeping Georgia’s EU and NATO membership prospects alive and advancing. The West will persist in supporting Georgia’s sovereignty, independence and territorial integrity.

As Georgia does its part to align with European standards, the EU could be generous in offering Georgia more export opportunities. Visa-free travel to many EU countries, a recent development, and other benefits from the EU-Georgia Association Agreement offer a wider window into Europe and encourage Georgians to persist on a westward course.

Western military training and equipment, and combat experience in Afghanistan and Iraq, have bolstered Georgia’s defense capacity. The United States is now supplying advanced Javelin anti-armor missiles. Together with NATO allies, America could redouble efforts to help the country build modern territorial defenses. Georgia’s substantial force contribution to the NATO mission in Afghanistan demonstrates its dedication to the purposes of the alliance.

The West could also urge Moscow to pursue peaceful ties with Georgia and accept its freedom to choose its path, while making clear that any renewed aggression would be costly.

Georgia represents a key test of whether it is still possible for reforming countries in the former Soviet space to become integral parts of the Euro-Atlantic community. The stakes are high.

Daniel Fried is a Distinguished Fellow at the Atlantic Council and was Assistant Secretary of State for European Affairs and served on the NSC staff for Presidents Clinton and Bush.

Kenneth Yalowitz directs the MA Program in Conflict Resolution at Georgetown University, is a Global Fellow at the Wilson Center and former Ambassador to Belarus and Georgia.