Where ISIS Ends and Kurdistan Begins 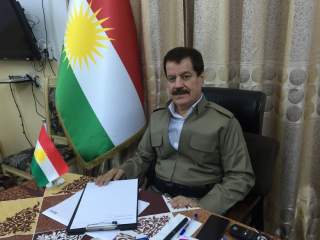 Kemal Kirkuki’s headquarters overlooks a pastoral scene northwest of Kirkuk. Decked out in traditional Kurdish clothes he had just finished a meeting. An orderly brought tea. Across one wall of his office is a giant map of the current area of operations for his peshmerga units. The peshmerga are the armed forces of the autonomous Kurdistan Regional Government (KRG) of Iraq. Kirkuki commands 20,000 of them, strung out along forty-four kilometers of frontline against ISIS.

“When ISIS attacked this area [West of Kirkuk], the Iraqi army left all their weapons to ISIS, including the anti-tank weapons and vehicles they left the keys in, including humvees, mortars and tanks. ISIS captured them all,” he recalls. In the fall of 2014 the fighting was dogged and tough with ISIS extremists and Kurds exchanging fire from positions only fifty to eighty meters apart. ISIS threw men into the battle, and used innovative tactics that have now become their signature: welding armor plates to trucks, bulldozers and other vehicles and using car bombs.  Three offensives, each codenamed “Scorpion,” pushed ISIS back to its current location, beyond a line of hills called Batel.

The successes against ISIS on this frontline and along hundreds of kilometers to the north and south have proved a learning curve for the peshmerga. With hundreds of thousands of volunteers willing to defend their homeland, Kurdistan has carved out breathing room in the last year. It has also succeeded in conquering areas that it previously contested with the central government of Iraq, such as districts south of Kirkuk, and the area of Shingal bordering Syria in the north.

Kirkuki embodies the generation of Kurdish leadership that has forged the KRG into a functioning, non-independent as of yet, state. Born in Kirkuk in 1954 he joined the peshmerga, then a Kurdish resistance force, when he was fourteen. Imprisoned by Iraq’s ruling Ba’ath party at eighteen, he was released in a prisoner exchange. A former speaker of the KRG parliament, he is a member of politburo of the Kurdistan Democratic Party, head of the region’s public relations office and a commander of the forces in this sector.

He sees the state boundaries of Iraq as an artificial imposition on the Kurdish people, created by a European agreement during the First World War called Sykes-Picot. “Peace of [the] Sykes-Picot [legacy] we faced genocide, 182,000 were killed and buried alive [by Saddam Hussein], 4,500 Kurdish villages destroyed, the experience shows Iraq is a fictitious state and it has failed,” he says.

The post invasion Iraq after 2003 has also failed, he argues. “The Kurdistan Regional budget was cut [by Baghdad]. The Yazidis suffered a genocide [at the hands of ISIS]. Iraq is already divided and its social fabric is already torn since decades now. The best solution would be to officially announce three separate countries.”  Kirkuki argues that keeping Iraq “united” in its current form means each group will threaten the others.  “The best choice is everyone has their own state, Kurdistan, Sunnistan and Shia-stan. One ethnicity or sect cannot rule Iraq.” He looks back at the history of the country which involved the suppression of Kurds and Shia by Saddam and after 2003 the suppression of Sunnis by a Shia dominated government in Baghdad. “In the U.S. people say ‘united Iraq’, whereas Iraq doesn’t control its own skies or all its own land territory or all its population, economy or diplomacy. What is united? The country has no sovereignty?”

The failed state of Iraq, which allowed ISIS to easily grow within it and whose central government slouches from one crisis to another, does continual harm to Kurdish interests. “We Kurds are in a fight against Daesh, we need to be able to sell our own oil and make our economy better and receive better equipment and weapons directly for the Peshmerga,” says Kirkuki.  “We have a legal and moral right to practice self determination and to have a referendum to practice that right.” In essence, Kurds should consider the independence option.

When ISIS attacked the Kurds in August of 2014, the initial experience was traumatic and unexpected. In the first six months of war almost 1,000 peshmerga were killed and thousands were wounded. Today’s Kurdistan region is secure. In my last two trips there in June and December of 2014, it was clear how seriously the KRG takes security. Checkpoints examine cars outside the major cities, and intercity travel anywhere near the frontlines includes dozens of manned peshmerga stations. That is because ISIS would like to penetrate civilian areas with sleeper cells and bombs.

The cost of such operations are on display at the Kirkuk police headquarters, where the images of 271 police killed fighting terrorism line one wall. Sarhad Qadir, the police commander of Kirkuk district who is looked on as a kind of legendary figure in Kurdistan, says his forces confront not only ISIS but Ansar al-Sunna, Ansar al-Islam, Jeish Muhammed, Jaish al-Mujahideen, former Al Qaeda and former Ba’ath regime elements. “We have sleeper cells, we try to capture them, but ISIS is the priority,” according to Qadir.

Qadir calls Kirkuk an Iraq in “microcosm.” An ancient city, it has a mixed population of Arabs, Turkmen, Kurds and other minorities. Saddam tried to expel its Kurdish population, but the situation has been reversed now and it is firmly under Kurdish control. In 2014, ISIS launched fourteen offensives to capture the city, coming within 26 kilometers. There were car bombs and daily terror. Now, with some 3,000 police deployed, the terror threat has been reduced.

Like Kirkuki, Qadir’s life was forged in the resistance to Saddam. He argues that if the international community had supported the Kurdish struggle years ago there would be a state by now.

Across Kurdistan there is this tendency to support independence but pragmatically wait for the right circumstances. Complex and competing forces make the next step precarious for the KRG.  This forces include the rise of Iranian-backed militias in Iraq, relations with Turkey and the Kurdish forces across the border in Syria that run the People’s Protection Units (YPG), as well as internal politics between the KDP and the Patriotic Union of Kurdistan (PUK) which is the second largest party and a partner in the current coalition government.

The KRG is the most stable part of Iraq, and hosts some two million Arab refugees, including many Christians who fled ISIS persecution in Mosul. “It represents a 29 percent increase in our population,” says Kirkuki. “We have limited resources, our budget was cut by Baghdad and we are fighting ISIS at the same time.” They will only go home if Mosul is liberated. But privately other Kurdish commanders are concerned that Iranian-backed Shia militias will demand an outsized role in the liberation of Mosul, which means Sunni Arab refugees might not return. This dispute has brought relations between Turkey and Iraq to a crisis point, as Turkey sought, according to reports, to play a limited role in training Sunni Arabs to take back Mosul.

If the KRG cannot find support from the international community to solve its budget problems and desire to export oil, its impressive gains in the fight against ISIS and securing the countryside, will face difficult obstacles in the years ahead.

Seth J. Frantzman is a Jerusalem-based journalist who holds a PhD from The Hebrew University of Jerusalem. He returned from a weeklong reporting trip to Kurdistan on December 21.