Where Will Russia's Protests Lead? 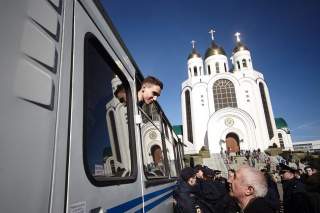 March 26 saw widespread protests against corruption in Moscow and several other big Russian cities. The formal cause was the absence of reaction by the authorities to the film He Is Not Dimon to You, produced and distributed online by the Foundation Against Corruption, headed by opposition activist Alexei Navalny. The film accused Prime Minister Dmitry Medvedev of corruption, showing estates, palaces and yachts, registered in the names of his friends and former colleagues and financed by oligarchs with close relations with the government, which he allegedly used free of charge. Since in most cases protesters’ rallies and demonstrations were not sanctioned by the local authorities, the police dispersed the crowds, arresting hundreds.

The turnout is not easy to assess; official numbers provided by the police are usually lower than the truth. Most experts agree that the number of participants in Moscow could have been anywhere between fifteen and twenty-five thousand, with a total of fifty or sixty thousand across the country. These numbers are the highest since the events of 2011–13, when tens or perhaps even hundreds of thousands rallied in Moscow against alleged Duma election fraud and the decision by then President Dmitry Medvedev and Prime Minister Vladimir Putin to swap places. Compared to the previous protests, the current ones had several distinct features. First of all, they were much more widespread geographically, taking place not only in Moscow and St. Petersburg, but also in cities all over the country: Kazan, Belgorod, Volgograd, Vladivostok and many others. Second, the majority of slogans were not directed against President Putin, election fraud or his policy toward Ukraine, but against Medvedev and the corruption of government officials. Third, a large number of participants were very young, including university students and even high-school pupils.

What, then, were the reasons for public dissatisfaction this time? It is clear that foreign policy was not among them. The vast majority of the population supports Russia’s foreign policy, and its main conductors—President Putin, along with Foreign Minister Sergei Lavrov and Defense Minister Sergei Shoigu—are among the country’s most widely approved political figures. The reason for the current protests was the worsening economic situation. Widespread corruption has been always a feature of post-Soviet Russia. However, it was tolerated during the first fifteen years of Putin’s rule, when the majority’s standard of living was steadily rising. Today, when the economic situation for many has gone downhill, corrupt officials receive the blame. This can be clearly seen from protesters’ slogans, which included “Sell palaces, build roads!” or “You ran out of money—we ran out of patience!”

It’s not that the standard of living is plummeting; the economic situation is not quite so troubling. But for the majority, it is certainly not improving at the same pace as before, or even staying at the same level. This growing gap between public expectations and reality leads to widespread frustration. The broad appeal to young people is also easily explained: having grown up in the wealth of the 2000s, they expected to follow the prosperous lifestyle of their parents, easily finding well-paid jobs and taking regular, expensive holidays overseas. When, all of a sudden, these opportunities became much more elusive, this triggers dissatisfaction among the youth, who wished to live a better life than their parents, not a harder one. In this atmosphere, corruption among government officials becomes an obvious target. “Why is our life getting harder, while you and your children continue heaping up riches?” they ask.

As for the ruling elites, they did not seem to express too much concern until recently. According to the government, the economic situation was becoming trickier, but not dangerous; for now, its main aim is to win some time until things return to normal. Despite discussing various growth-oriented reform projects, such as the more liberal proposals of former finance minister Alexei Kudrin, or those of the Stolypin Club and business ombudsman Boris Titov, who favors a greater role for the state, no side has taken any real action so far. The country largely continues to rely on revenue from the sale of oil and natural gas, even though both have dropped as a result of falling prices on the international markets. The only noticeable trend is active diversification of exports and branching out to friendlier Asian markets, instead of depending on hostile Europe.

As for corruption, it seems that the elites do not consider what Navalny’s film revealed to be either illegal or unjust. Such information is often overlooked, while the protests are either banned or confined to distant peripheries, where few pay attention to them. No TV channels report on them either. According to some Russian experts, the social system that emerged after the collapse of the Soviet Union resembles the more traditional estate structure present in tsarist Russia, in which each social class enjoyed unequal rights and privileges depending on its ascribed status. From this viewpoint, the current elites see authorities’ privileges not as corruption, but as a legitimate “rent,” which lower classes are obliged to pay the higher ones. Social mobility in such a society was guaranteed by promotion through the government service. Having qualified for a higher level, a bureaucrat in tsarist Russia could join a higher class and enjoy such privileges as serf ownership, exemption from taxation and corporal punishment, and so on. In the current situation, government service once again provides one of the main opportunities to upgrade one’s social status.

The contemporary Russian ruling elite certainly does not proclaim its special rights, since formally all are equal before the law. However, the formal law is not applied in many cases, or applied only to the lower classes, whose representatives are often punished for corruption. At the same time, higher-level bureaucrats seem to be immune to investigation despite some well-known irregularities. Since the beginning of the century, only one top official at the level of minister has been under investigation, and even in this case, it is unclear if he will stand trial. The described traditional class system also works for the lower levels. The incomes of heads of state companies, schools, universities and hospitals in contemporary Russia are often up to ten times higher than those of ordinary workers, professors, doctors and teachers. Despite not being exempt from prosecution, these people form another group that receives a high “rent” and maintains an interest in encouraging the lower classes to comply. The contradiction between the formal law and informal rules of real life instil a kind of cognitive dissonance in young Russians. In school, they are taught how society should function, but the reality has very little to do with this academic ideal.

The current protests are relatively small in scale. The number of participants is much lower than tens of thousands in 2011–13, or the hundreds of thousands, or even millions, in the later years of the Soviet Union. But the reasons and motives are similar. The protesters are not fighting for establishing a law-based democratic state, but for social justice and against the excessive privileges of the ruling elite. Such slogans have always been popular in the post-Soviet space, and brought many leaders to power, from Boris Yeltsin to Aleksandr Lukashenko and Mikheil Saakashvili, neither of whom managed to create a significantly fairer society.

For Putin’s leadership, however, these protests are a serious warning. If it is not able to improve the economy and secure economic growth, dissatisfaction will rise. For the moment, it has only spread to a narrow group of educated people in the larger cities. According to opinion polls, the majority of the population in small towns and medium-sized cities, where the bulk of Russia’s population lives, supports Putin’s policies. They are attracted to his active foreign policy and see the demand for more rights as yet another fantasy of pretentious Moscow intellectuals. They fail to see any alternative to the status quo, and are thankful to Putin’s leadership for stabilizing the country after the mess of the 1990s. However, if the standard of living continues to stagnate, or even fall, this silent majority may join the dissatisfied. This could make future protests more populous—and less peaceful.

Alexander Lukin is head of the Department of International Relations at National Research University Higher School of Economics, Moscow, Russia.