Which Germany Should Modern China Emulate? 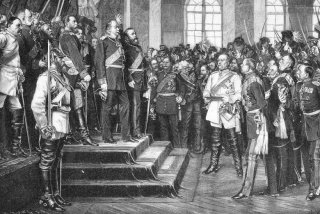 Is today's China the Kaiser's Germany reborn -- an industrial powerhouse that entertains grand geopolitical ambitions and is prepared to march a continent over the precipice to fulfill them? Will China's bid for "true maritime power" succeed where Germany's quest for sea power failed a century ago?

We'll never know if we heed Heather Marie Stur's advice. Professor Stur demands that we stop comparing Iraq to Vietnam. In the process she seems to imply that comparing any two unlike cases is pointless.

That goes too far. What she's really protesting, one suspects, is the all-too-common practice of proclaiming that Iraq is Vietnam -- the historical Vietnam War having devolved into "Vietnam," shorthand for American hubris and failure. Calling a foreign undertaking another Vietnam offers an easy way to play gotcha with intellectual rivals. And as Stur suggests, sloganeering of that type does indeed make for slipshod history.

But the purpose of historical comparison isn't to unearth cases that are just alike, is it? Cases separated in time, space, and sociopolitical context never are.

Now admittedly, two cases must resemble each other to some degree. The past has to echo loudly enough from one case to another to make comparing them worthwhile. But the purpose of such analytical ventures is to detect similarities, expose differences, and learn what we can from the enterprise. In so doing -- in using the past as a standard for judging the present and glimpsing the future -- practitioners and scholars school their foresight.

Iraq is like Vietnam in major respects. It differs in others. The process of figuring out which is which imparts strategic wisdom. Wisdom is good.

Which brings us back to Imperial Germany and Communist China. The likeness between the rising European and Asian powers appears striking -- in a superficial way, at least. Like freshly unified Germany, China is an industrial power on the make. Like Germany, China is emerging from a protracted period of disunity, weakness, and subjugation at outside hands. And like Germany, China is ruled by a youthful regime bearing a chip on its shoulder.

The sea, furthermore, beckons to the Chinese Communist Party as seductively as it once beckoned to Kaiser Wilhelm II and his lieutenants. Saltwater constitutes a medium whereby continental nations make themselves prosperous, radiate geopolitical power outward, and burnish their standings among nations. Beijing, like fin de siècle Berlin, views overseas commerce, merchantmen and ships of war, and access to foreign seaports as the lineaments of sea power. Both autocracies set out to amass these trappings of commercial and naval might -- and did so with aplomb.

The similarities between the two aspirants, then, are many and striking. And yet the differences are many and equally compelling. Consider. A few years back China Central Television compiled a series of books and TV specials titled The Rise of the Great Powers. This constituted an effort to learn from past rising powers' successes and failures, fashioning guidance useful to China's leadership.

The historians' takeaways from the German experience were especially illuminating. When shaping policy and branding itself for foreign audiences, they intimated, Beijing should emulate Otto von Bismarck's Germany rather than the Kaiser's.

Why? True, Bismarck, the Second Reich's Iron Chancellor, orchestrated German unification through a series of limited wars, against Denmark, Austria, and France. But afterward, as peacetime chancellor, he went to extraordinary lengths to convince Germany's neighbors that the united Reich was a "sated" power harboring no further designs on their territory. And he evinced little interest in colonies or a big navy. Such a navy might signal that Germany meant to square off against Great Britain's Royal Navy, the premier seagoing force of the age, for mastery of the waves. It might bring about needless strategic competition or strife.

Bismarck's humble foreign policy kept Germany safe during his tenure in Berlin. Such adoit peacetime statecraft is worthy of emulating -- hence the accolades the CCTV filmmakers showered on him. Yet Wilhelm II dismissed Bismarck from office in 1890. He lacked the Iron Chancellor's self-restraint, while no subsequent chancellor could manage the erratic monarch. Instead the Kaiser and his state secretary of the navy, Admiral Alfred von Tirpitz, set out to build a fleet of short-range, heavily armored, heavily gunned battleships and battlecruisers. Britain could interpret this force only as a direct threat to its naval supremacy -- and thence to the maritime empire that depended on ruling the waves.

In effect, then, the German leadership pointed a gun at London's head, demanding that it make way for German sea power -- or else. The Anglo-German naval building spree that ensued helped give rise to the animosities that precipitated world war in 1914. The Chinese historians saw this as a grave strategic error. They advised Chinese officials not to make Wilhelm II the face of Chinese strategy as they strive to manage relations with America, the supreme sea power of our day. Bismarck is a more trustworthy guide.

Sage counsel. Yet these days, alas, Beijing's naval ambitions -- and its diplomatic conduct -- evoke the Kaiser more than Bismarck.

Indeed, the comparison is disquieting. China promises to be a far more formidable seafaring state than Imperial Germany ever was, with leadership that's just as mercurial. It boasts far more maritime potential than Germany, measured in economic resources, manpower, shipyards, you name it. For all Beijing's fretting over Asia's offshore island chains, moreover, China's maritime geography is far more permissive than Germany's. Germany's major competitor lay athwart its access to the Atlantic high seas, leaving only narrow corridors to the north and south. Royal Navy men-of-war could barricade those waterways, confining the German High Seas Fleet to the North Sea without venturing far from their homeports in the British Isles.

One German pundit lamented that commanding the North Sea was like commanding a "dead sea" such as the Caspian. Berlin could do it -- but why bother?

Geography is a friend to China, relatively speaking. Chinese vessels enjoy numerous entryways to the Pacific or Indian Ocean high seas. The People's Liberation Army (PLA) can bring land-based air and missile forces, along with swarms of submarines and missile patrol craft, to bear in waters and skies Beijing cares about. And while its chief competitor, the U.S. Navy, has strongholds in the Western Pacific, the bulk of the American fleet is based thousands of miles away, in places like Honolulu and San Diego. It's hard, and expensive, and perilous to stage operations in Asian waters from naval stations that remote. Advantage: China.

Thus inspired, Berlin pitted strength against strength in its naval arms race with the Royal Navy, the gold standard for capital-ship strength. It's tough for a newcomer to match an established power in a ship-for-ship competition. Yet Germany tried it. Only in the years immediately preceding the Great War -- when it became obvious Germany could never win the battleship-building race -- did Berlin shift resources into asymmetric craft such as subs and torpedo boats. Small craft wrought outsized damage during the Great War.

Why the disparity? Because while Chinese sea-power proponents render fealty to Mahan on the big questions -- the need for commerce, bases, and ships -- they look to their own traditions for practical insight into how to make and execute maritime strategy. Mao Zedong supplies that insight through his doctrine of "active defense." Mao's military writings are all about how a weaker antagonist can turn the tables on a stronger one. Offshore, it does so by deploying asymmetric capabilities -- access-denial forces in current parlance -- to make operating off China's shores so costly and hazardous that an opponent may decide the endeavor isn't worth it. If so, China wins by default.

By fielding a panoply of access-denial hardware and tactics, the PLA granted itself time, and leisure, to experiment with blue-water platforms. It also spared itself a ship-for-ship arms race reminiscent of the Anglo-German competition. Cunning. If you can assert a measure of control over your offshore environs with shore-based aircraft and anti-ship missiles, while dotting the near seas with large numbers of subs and small craft, why not do it? Why not use Maoist methods and widgets to achieve Mahanian goals?

So both the similarities and the differences between Communist China and Imperial Germany yield insight -- making this a comparison worth undertaking. The upshot? That Germany, the strongest European power of the day, was the easier nut of the two for a leading sea power to crack. That's a sobering prospect as we peer ahead.