Which Road Will Egypt Take? 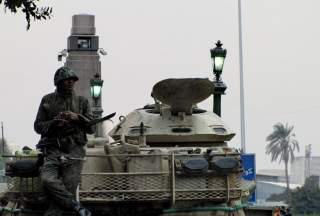 With Abdul Fattah al-Sisi’s official resignation from the military and bid for the presidency, the future of Egypt looks murky at best. While his victory is highly likely, the question remains—down which path will he take Egypt? Al-Sisi’s support for the anti-Morsi protesters may indicate support for the democratization of Egypt and the will of the people. On the other hand, his bid looks like a giant leap backwards for Egypt, a return to a military dictatorship. Egypt has several potential paths forward under an al-Sisi government, none of which are ideal. Unfortunately, Egypt appears to be justifying analysts’ worst fears and will likely return to a Mubarak-style military autocracy under al-Sisi.

The first option is a military government that enacts economic and political reforms that improve the lives of the citizenry, not just the military or the elites. This will lead to a slower evolution toward democracy. On the plus side, slower evolution under a stable government would allow structural changes to take root, fostering effective institutions and greater stability. The negative side is that evolution of this sort would be neither smooth nor straightforward. It would come in fits and spurts, punctuated by returns to oppression and violence. It would also be extremely slow, and easy for a demagogue to reverse.

Unfortunately, given Egypt’s current situation, option one is highly unlikely. Given the high levels of repression and violence, the only reforms the government will likely enact would involve greater centralized power in its hands. Furthermore, there are a myriad of ways for a government to pay lip service to democratization without actually decreasing its power.

Another option is that Egypt becomes stuck in a proverbial time loop—repeating the revolution every year or two when the government fails to deliver on actual, on-the-ground improvements. This would not necessarily make Egypt worse off, but it could further weaken the economy as revenue from key industries, such as tourism, continues to decline. It would not improve conditions either, as improvements, unfortunately, take longer that the voting public generally likes. The potential upshot of this option is that, hopefully, over time, mass action would become more and more cohesive and leaders start to emerge from the morass. This would bring developed political parties into Egypt’s political system and potentially, leaders from outside the military and the elite as well.

This, however, will remain only a temporary option. Revolutions, or even mass action, are difficult to maintain over time. Moreover, if some improvements, particularly economic improvements, do occur, the majority of the country will acquiesce to a nondemocratic government. The best example of this is the Chinese government, which has managed economic growth without any accompanying political liberalization. Eventually, either a government will improve conditions for the average Egyptian, or it will become so repressive that mass action ceases to be a viable option.

The third option is a total crackdown on any and all political movements and the return of a repressive and autocratic government. The impetus behind this path is the idea that establishing stability is the first and foremost priority of the government. If you establish stability, the rest will follow. Or, if the government is truly cynical, it simply does not care what happens as long as the ruler and his or her cronies are taken care of.

Right now, it looks as though Egypt has chosen to go with option three, the return to repression under military rule. The first step for any autocracy is to get a firm grip on the political process, weeding out the opposition. This is precisely what has been occurring. Massive repression of the Muslim Brotherhood is the most obvious example of this process. While there are some legitimate security concerns regarding the Muslim Brotherhood ties to ongoing violence, banning the entire organization and labeling them all as terrorists is like using a sledgehammer on a nail—overkill and likely to create a mess. It does, however, have the benefit of getting the only meaningful political party out of the current political scene and that is a key step in political consolidation. Other examples of consolidation abound, including harsh treatment of dissents and a crackdown on journalists.

While Egypt is headed down the path of autocracy, this does not suggest the futility of change or of promoting democracy in Egypt, nor, say, that the Arab Spring was a failure. Autocracy will not be a permanent fix for the factors that nourished the Arab Spring. It will work for a while, maybe even a decade, but eventually, repression will not be enough, and the demonstrations will begin again.

A little liberty is a dangerous thing—especially when it bears fruit. The Arab Spring in Egypt may not have brought about democracy, but that does not mean it failed. Egypt now knows the impact mass action can have on its government. They have seen not one, but two governments fall as a direct result of protests and popular action. Egypt may be moving back toward a military dictatorship, but now the people have a taste of liberty. No matter how repressive the military establishment decides to be, the genie is out of the bottle.

Kathryn Alexeeff holds a master's degree in Security Studies from Georgetown University and has worked at the Atlantic Council's South Asia Center. All views expressed are her own.