Who Are Trump's Christians? 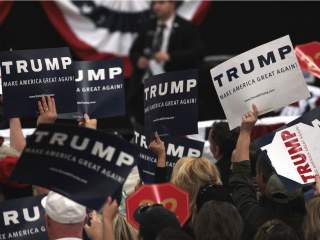 For decades, Republican electoral politics has relied on “the evangelicals”—a vague swath of socially conservative low-church Protestants who would reliably support GOP candidates saying the right things about abortion and family values. Ever since Ronald Reagan told the Moral Majority in 1980 that although “I know that you can’t endorse me. . . I endorse you,” the Republican establishment has had a tenuous but stable relationship with the Christians who made up its most loyal voter base.

Then along came Donald Trump. Far from fracturing the Republican base, his real talent has been to exploit internal rifts that had long lain dormant. It’s no secret that instead of principled conservatives, he appeals viscerally to the losers of the global economy. His staunchest supporters feel vulnerable not just because of declining working-class employment, but also because of a loss of social belonging and binding community norms of all kinds—including church membership—that has hit working-class whites harder than any other group.

In fact, modern American evangelicalism has always been ill defined; part of the problem stems from its lack of an organizational center. Instead of an evangelical Vatican, hundreds of tiny denominations jostle alongside more established churches. There are ecclesial bodies in which some members would call themselves evangelicals, while others do not. And when it comes to politics, “evangelical” is often extreme shorthand for “socially conservative white Protestants.”

How, then, can pollsters and policymakers properly assess the role of evangelical Americans in politics?

Rather than attempting to define the boundaries of evangelicalism, one recent approach has identified four conditions—beliefs about Jesus, the Bible, salvation and spreading the gospel—that correlate strongly with American Christians calling themselves evangelicals. These beliefs also correlate with regular church attendance. This approach, which prioritizes belief and practice over the self-identification of “evangelical,” yields a much more useful and coherent category for pollsters and social scientists to work from—even if it is a category more focused in its definition than what the pundits are used to.

There’s the creeping crack-up of working-class institutions again. As Charles Murray has written, the subset of self-professed “religious” U.S. whites that is least affected by declining church attendance trends is educated and wealthy, seemingly in contradiction of every stereotype about class and religion. The loss of social capital that accompanies detachment from a cohesive church community has very real material costs, and lower-class white communities are far less equipped to withstand it than those who are rich and unchurched.

Leaders in mainstream evangelicalism—the equivalent of the Republican party establishment—have spent months insisting that Christians should have nothing to do with a thrice-married, power-hungry narcissist who openly boasts of his adulterous exploits and became famous for exploiting the weak, from gamblers to widowed homeowners. Russell Moore, the Southern Baptist Convention’s most influential political thinker, has distanced himself from the label “evangelical” itself, after years of seeing it “co-opted by heretics and lunatics.”

But that’s not Trump’s crowd. On Super Tuesday, Trump won his largest share of a primary electorate to date in Massachusetts—which a new Pew report scored dead last in a ranking of states with “highly religious” populations (it was tied with Vermont).

Moore believes there’s also a self-reporting problem, identifying a “cultural Christianity that causes people to respond with ‘evangelical’ and ‘born-again’… even though they haven't been in a church since Vacation Bible School.” It’s a category that’s sufficiently vague to accommodate the least formally religious Americans, who often nevertheless identify themselves with some flavor of Protestant Christianity. Far from espousing a particular creed, these voters see “evangelical” as an identity—“people like us,” a category irrespective of actual religious adherence and minimally bound by formal religious commitments.

A changing America seems to have changed some of these voters’ instincts. While activists continue to advance conservative goals at the margins of issues like abortion and same-sex marriage, the general public sees the prominent battles as more or less settled victories for liberalism. Trump’s own apparent inconsistence and indifference on these questions is irrelevant, as both he and his supporters see the greatest need for action elsewhere. His appeal to Christian sentiment these days comes in the stump-speech line, “the Second Amendment is under siege. And I'll tell you what else is under siege: Christianity.”

Immigration, terrorism, the globalized economy, the pernicious rise of political correctness: these threats, real and imagined, are laying siege to a way of life that not very long ago could be easily taken for granted. None of these problems has an obvious answer in lightly worn Christianity as such, which increasingly has more to do with being “good, nice, and fair to each other” than with any comprehensive code of ethics, whether Protestant biblical values or Catholicism’s holistic articulation of the moral life. Sin, if discussed at all, is certainly not relevant to the worthiness of a future leader. If Trumpism is a heresy, it’s a compelling and easily digestible one, melding the therapeutic and messianic distortions of Christian orthodoxy that have long held sway in American religion.

More rigorous Christians, too, have made political calculations to support Trump. Decades of proudly Christian politicians were what brought America to the disasters of 2016. Instead of “good soldiers” from among their ranks like a Ted Cruz or a Marco Rubio, writes Ben Domenech, they want a bold tyrant and defender; “Donald Trump would be a tank.” Describing the same phenomenon, Charles Krauthammer writes of Christians embracing Trump not as a “choir boy” but a tough guy who will “stand outside the churchyard gates and protect the faithful inside.”

In a country where prosperity and comfort have arrived—just not evenly distributed—the losers have plenty of reason for fear and anxiety. The apostolic reassurance that “perfect love casts out fear” is a hard saying when the steel plant is shut down and the church is full of phonies. Why not turn to the man who’ll make your country great again?