Who Benefits from Iran Sanctions Relief? 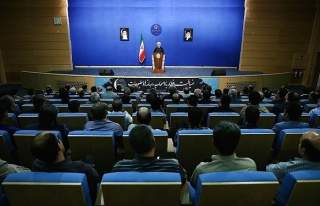 A final nuclear agreement between Iran and the P5+1 (United States, Russia, China, United Kingdom, France, Germany) could lead to substantial sanctions relief and economic benefit for Iran. More than $100 billion of Iranian oil proceeds are “frozen” in foreign bank accounts under the current sanctions regime. The repatriation of Iran’s money would no doubt boost a flagging economy. Moreover, Iran’s ability to boost oil exports and attract foreign investment in the future could lead to a reinvigorated economy. Some analysts and commentators have argued that the easing of sanctions would allow the Iranian government to expand its regional influence by increasing aid to allies such as the Syrian regime and Hezbollah. Others claim that the government of President Hassan Rouhani would instead focus on domestic economic issues instead of spending money on adventures abroad.

So who would benefit from the post-deal sanctions relief? There is no easy answer to this, as all parties concerned—the Rouhani government, the Iranian people, and the Revolutionary Guards in control of Iran’s regional policies­—are likely to benefit. Nevertheless, much of the economic boost from sanctions relief is likely to be consumed internally by the Rouhani government, the political-economic elite, and to some extent the Iranian people. Those responsible for Iran’s foreign policy, including the Revolutionary Guards, will have more resources, but Iran’s regional influence is not as much dependent on money as it is on Tehran’s ability to exploit the growing instability around it. And that takes less funding than often assumed.

Upon taking power, the Rouhani government expressed shock at the economic disarray former President Mahmoud Ahmadinejad had left behind. Ahmadinejad had presided over the highest oil prices in Iran’s history. Yet much of the nearly $700 billion in oil money earned under him was spent on projects with little benefit for the average Iranian. Quite a bit of it was spent on subsidies meant to gratify Ahmadinejad’s lower class constituency. For example, Ahmadinejad sunk billions into the Mehr subsidized housing program, but it has been deemed unsuccessful and wasteful by many in Iran. Many of the houses built are poorly constructed or remain unfinished. The Rouhani government has blamed Mehr for causing much of the inflation faced by the country. Billions of dollars also disappeared due to corruption—several members of Ahmadinejad’s government have been charged or are under investigation for corruption, and more cases will likely emerge after a nuclear deal.

In addition, Ahmadinejad provided billions of dollars in loans and no bid contracts to Revolutionary Guards affiliated companies. A substantial amount appears to have been gobbled up by Iran’s influential clerics and wealthy foundations (bonyads). During Ahmadinejad’s presidency, Tehran’s streets were flooded by luxury cars driven by the children of wealthy Guards and clerics. Iran no doubt provided money to Hezbollah and Hamas in addition to a number of other allies. But the amounts provided (estimates range in the hundreds of millions of dollars a year) pale in comparison to the billions spent and squandered on Ahmadinejad’s domestic ambitions. It is therefore not surprising that Rouhani, once in office, discovered government coffers to be nearly empty and national debt nearly reaching $100 billion.

Much of the money repatriated to Iran will have to be spent on addressing the government’s inherited problems. In addition, Iran needs an estimated $200 billion in investments for its dilapidated energy sector. But perhaps more importantly, at least some of the economic benefit from sanctions relief has to trickle down to the average Iranian. Rouhani was able to win his election because Iranians were desperate for change, especially economic relief. Of course, Iran is not a democracy, and the Guards and bonyads will take a large cut of sanctions relief, whether it is the repatriated money or wealth created through future oil export or investments. But the Rouhani government and the regime as a whole also have to pay attention to popular demands. After all, the regime faced a national crisis before Rouhani’s election: the 2009 mass protests that shook Iran were in no small part the result of the economic and social pressures faced by the population. The need to prevent future unrest had a role in Supreme Leader Ayatollah Ali Khamenei’s decision to support Rouhani’s nuclear negotiations. Of course, Khamenei also had to ensure the loyalty of the Guards and Iran’s traditional merchant class, both of which were hit hard by international sanctions.

This doesn’t mean that Iran wouldn’t use some of the sanctions relief on maintaining or expanding its influence in the Middle East. But this won’t take a tremendous amount of money. Iran’s support for the Syrian regime is likely to be the biggest of its foreign policy expenses. To date, Iran may have provided billions of dollars in financing and weaponry to keep the Assad regime alive. Hezbollah has developed some measure of financial independence, although Tehran may increase funding to the group if it can afford to. Relations between Hamas and Iran are lukewarm at best; if Iran provides additional funding to Hamas, it is unlikely to exceed millions of dollars a month, as was the case when Iran and Hamas had warmer relations (before the Syrian civil war.) And finally, Iran has been able to expand its influence under severe economic constraints due to a collapse of central authority in much of the Arab world, and not because it is the richest country in the Middle East (that title belongs to Saudi Arabia.)

A nuclear deal, if successful, is likely to improve Iran’s economy. But Iran is unlikely to witness rapid economic growth that would empower the regime regionally. Corruption, waste, and unaccountability are endemic and are likely to present challenges to Rouhani’s economic goals until the end of his presidency. Rouhani would like to privatize Iran’s economy and integrate Iran into the global community, but he has to contend with forces that have thrived off of Iran’s state controlled economy for decades. The Revolutionary Guards, fearful of Rouhani’s economic and political agenda, may boost their spending abroad, but they are likely to pocket much of the money from sanctions relief. In Iran, creating a revolutionary society often means creating immense riches for the elite few. Rouhani has to give something to Iranians who have looked up to him, but sanctions relief is likely to flow to those with the deepest pockets. This may not necessarily translate into greater Iranian influence abroad, but rather more mansions and Ferraris on Tehran’s streets.