Who Cares What the Neocons Think? 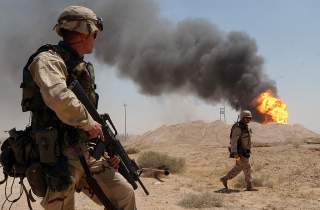 George Orwell once famously observed that Western intellectuals, more often than not, harbor a dirty secret. For all their pious talk about democracy or equality, their true temptation is to “usher in a hierarchical society where the intellectual can at last get his hands on the whip.” Orwell was talking about James Burnham, who went from being a prominent Trotskyist in the 1930s to a columnist at National Review espousing the rollback of Soviet Communism. But the force of his dictum applies to today’s neoconservatives, and perhaps to none better than Eliot A. Cohen.

Cohen, who is the Robert E. Osgood professor of strategic studies at Johns Hopkins University’s School of Advanced International Studies, was, of course, among the foremost proponents of the Iraq War. His forthcoming book The Big Stick: the Limits of Soft Power & the Necessity of Military Force, as the title suggests, is not the work of someone who has had any serious second thoughts. On the contrary, it is an unabashed plea for a revival of American militarism. As Talleyrand remarked about the Bourbons, Cohen has learned nothing and forgotten nothing.

Perhaps, then, it should not be surprising that Cohen has been at the forefront of the “Never Trump” campaign. Cohen is not a traditional conservative but a crusading neocon. Writing in the American Interest, he observed, “The Republican Party as we know it may die of Trump. If it does, it will have succumbed in part because many of its leaders chose not to fight for the Party of Lincoln.” Then, after Trump won, Cohen apparently changed his mind. He suggested that younger conservatives might consider serving in the new administration.

Yesterday, however, Cohen caused a furor with his announcement on Twitter that “After exchange w Trump transition team, changed my recommendation: stay away. They're angry, arrogant, screaming ‘you LOST!’ Will be ugly.” He expanded upon his about-face in an op-ed in the Washington Post. In it, he stated, “The tenor of the Trump team, from everything I see, read and hear, is such that, for a garden-variety Republican policy specialist, service in the early phase of the administration would carry a high risk of compromising one’s integrity and reputation.”

The Robert E. Osgood professor of strategic studies is entitled to his tergiversations, but does he really have to inflict them on the rest of us? The interesting question isn’t why Cohen dislikes Trump. That’s obvious. No, the real question is why anyone is listening to Cohen in the first place. Cohen isn’t offering a persuasive criticism of Trump but an exercise in moral vanity. Given the fervor with which he denounced Trump did he really expect that a red carpet would be rolled out for him? Like many neocons, he is better at dishing out criticism than taking it.

The truth is that throughout the election, neoconservatives like Cohen preached the same misguided ideas that led to such fiascos as the Iraq War. But the American public rejected the war and Trump, in the South Carolina primary debate, appealed to the GOP base when he said that the war was a disaster. For all of Cohen’s huffing and puffing about the utility of “hard power”—by which he means systematically killing other people—the war in Iraq is nearly universally acknowledged as a strategic failure that only ramped up the national debt, killed thousands of Americans and Iraqis, and helped foster the environment in which ISIS and jihadists now thrive. This is the threat environment that America faces in the Middle East—a rising China, resurgent Russia and emboldened Iran are icing on the cake. Through the cavalier foreign policy prescribed by Cohen and others, the United States now faces increasingly sophisticated and aggressive foes. Why should the decisionmakers who pushed such misbegotten policies have any clout in a Trump administration? In his foreign-policy speech in April, Trump specifically indicated that he wanted to move on from the Washington establishment types with good resumes and failed records that have brought America to grief in the past.

No doubt, any administration is wise to try and solicit conflicting views and opinions. President-elect Trump highlighted the “passion” of those opposing his victory. The group that Trump should consider reaching out to isn’t the neocons, but those in the Hillary Clinton camp, who supported their own party’s candidate but are prepared to work to advance U.S. national interests. Cohen concludes his Post column by contending, “Your country still needs you—just not yet.” Sorry, Professor Cohen. What it doesn’t need is a restoration of the neocons.