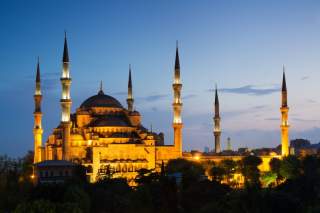 The Islamic State of Iraq and the Levant (ISIS) and other terrorist groups purporting to act in the name of Islam have precipitated two fundamental questions in the West. First, can non-Muslims credibly comment on the nature of Islam? Second, is Islamic ideology more disposed to violence than other religions?

These are familiar questions for those of us who worked in the office of the Secretary of Defense after September 11, 2001, tasked with preparing the Bush administration’s seminal brief on the “battle of ideas” as a critical component of the “global war on terrorism.”

During vigorous internal Department of Defense (DoD) and interagency debates, we grappled with basic tenets of Islamic theology to explain, or discredit, current terrorist movements.  Two competing narratives emerged, each drawing on Qur'anic texts and the hadith. One defined Islam as essentially peaceful and tolerant, citing the experience of al-Andalus in Spain between the 10th-12th centuries when Muslims ruled wisely and permissively over Christians and Jews, and all cultures flourished.

Others argued that it was precisely because those Muslims were already in the position of ruling Spain that they could afford to wield power relatively benignly. They pointed to contrasting historical periods, starting with Muhammad's rule, when Islam spread by the sword and non-Muslims were given the choice of submitting to sharia law or perishing.

Officials with that perspective viewed Islam as an inherently violent religion and pointed to examples in disparate cultures around the world. They argued that Islam needed to emulate Christianity and undertake its own “reformation.”

Eventually, we bridged the divide by saying that most contemporary Muslims practice their faith peacefully and tolerantly, but a small, radical minority aspires to return to Islam’s harsh seventh century origins. We called that a “perversion” of a peaceful faith, a theme that has taken root but is subject to ongoing challenge.

We argued that over the past dozen centuries, Islam has, in fact, undergone a reformation as the practice of sharia has been significantly modified in most of the Muslim world.  What has been happening in recent decades is actually a counter-reformation as various stripes of Islamists try to restore the faith to its original, pure form during the time of Mohammed.

As our DoD brief declared, we are experiencing a conflict within Islam between moderate modernists on the one hand and violence-prone fundamentalists on the other, not a war of civilizations. Then there is the larger conflict—the war Islamic extremists are waging against the West. In that struggle, moderate Muslims and the West are “natural and necessary allies.”

During the drafting process, some cautioned against American non-Muslims becoming involved in theological disputes in Islam about the authenticity of one group or school of Islamic thought over another, though we clearly favored the moderates. In deference to Muslim sensitivities, anodyne terms like “violent extremism” began supplanting references to Muslims and Islam. The Obama administration has turned that political correctness to an art form, engaging in all manner of verbal gyrations to avoid calling terrorists the Islamists they claim to be.

When the president and other officials insist that Islamic State, al-Qaeda, and other self-described Islamist groups “have nothing to do with Islam,” they deny reality and wildly overstate the case. They do so at the urging of moderate Muslim groups, which similarly pressed the Bush administration. The problem is that non-Muslims—unless they happen to be actual Islamic scholars—are in no position to judge who is and is not a “genuine Muslim.” Instead, we are bystanders to, and victims of, that internal conflict.

As we concluded a dozen years ago, it is up to moderate Muslims to take up the burden, as some already have, of defeating the Islamists’ murderous ideology and their counter-reformation. In doing so, the moderates cannot fall into the radicals’ trap by identifying with their narrative of Western anti-Muslim persecution and alleged “Islamophobia.” They need to confront the dual reality that while most Muslims are not terrorists, most terrorists claim to be Muslims.

For the true moderates, there is a patent illogic in first dismissing the violent Islamists as not real Muslims—defining deviancy out—then decrying the West’s campaign against the supposed perverters of Islam as a “war on Islam.” It is an intellectually dishonest and unworthy posture that only serves to strengthen the hand of our common enemy.

Islam’s modernists need to follow, or articulate in their own terms, the courageous message of Egypt’s President Abdel-Fattah el-Sisi who warned last month that something is seriously amiss within Islam, at least as it is taught and practiced by millions today:

“The Islamic world is being torn, it is being destroyed, it is being lost — and it is being lost by our own hands. It’s inconceivable that the thinking that we hold most sacred should cause the entire [Islamic world] to be a source of anxiety, danger, killing and destruction for the rest of the world.” So far, too few Muslims have risen to the challenge.

Joseph Bosco worked on strategic communications and Muslim outreach in the office of the secretary of defense, 2002-2004. ​