Who Is Jon Huntsman? 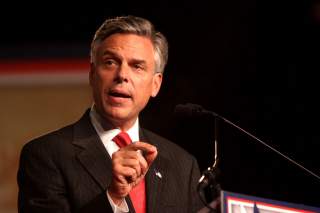 Deputy secretary of state, the second most powerful official in the foreign-service bureaucracy, is turning out to be one of the most difficult positions for the Trump administration to fill. Elliott Abrams, a former Reagan and Bush administration official, was called in for an interview last month, but was scuttled at the last minute once Trump was alerted to Abrams’s vociferous criticism during the GOP primary. Then there was John Bolton, the unilateralist uber-hawk who is still tight with the Trump camp but was passed up for reasons that haven’t been fully disclosed (although one can surmise that his advocacy for the invasion of Iraq didn’t help).

Now, former Utah governor, ambassador and 2012 Republican presidential aspirant Jon Huntsman is apparently in the mix. According to the Wall Street Journal, the former U.S. ambassador to China under the Obama administration is on the short list for the State Department’s number two, as well as another ambassadorship. Given his ambition and his diplomatic experience, it’s difficult to see how Huntsman turns down a senior job in the administration if in fact he’s offered one. But what’s good for Huntsman might not necessarily be good for Trump.

For a variety of reasons, Huntsman is a questionable fit. Indeed, a former senior Republican foreign-policy official with whom I spoke recently raised a number of cogent doubts about Huntsman. He lauded Huntsman’s diplomatic work, particularly in the Asia-Pacific region, which is fast becoming (if it isn’t already) the most geostrategically important area of the world for U.S. foreign policy. This official told me that Huntsman “knows China” like the back of his hand and has proven himself to be a “polished guy” who will work well with foreign governments. None of this should come as a surprise; after all, he speaks Mandarin, has studied the region for decades, and represented the interests of the United States in China for two years (and in Singapore for two years in the early 1990s).

This same official, however, voiced serious doubts that Huntsman would be able to navigate the State Department bureaucracy as well as he navigated China. He expressed concern that the former diplomat and governor of Utah doesn’t have “experience working in State.” Whereas being an ambassador is about building bilateral relationships, being the deputy secretary is more manager and politico than diplomat. The problem is compounded by the fact that Secretary of State Rex Tillerson could use a dynamic deputy who knows the building well. Tillerson has been tentative and shy, both qualities that are hampering his ability to have any real influence in the administration. The fact that Trump is proposing to slash the State Department budget by 37 percent may be taken as an indication of his view of its overall importance.

Then there is the fact that Huntsman’s political skills seem questionable. He ran for president as a moderate in 2012, at a moment when the GOP was moving to the right. He depicted himself as a centrist realist. Huntsman argued during his short-lived presidential campaign that the U.S. could get along just fine with fewer men in the active-duty army. Indeed, he went a step ahead from the conventional Republican viewpoint by arguing for a closure of bases that were just draining dollars from the U.S. military that could otherwise be devoted to an Asia-Pacific reset. But after his abortive run for the presidency, Huntsman then converted himself into more of a hawk. In 2011, he became the chairman of the Atlantic Council at the very moment when that organization was converting itself into something of a bastion of neoconservatism. In June, he announced on his Twitter account that “after Brexit, NATO” was “even more important,” touting an Atlantic Council report. There is nothing wrong with adopting this position, but it doesn’t quite square with the stands that Trump propounded during his campaign. In October, Huntsman on Twitter referred to former Senator Joe Lieberman as his “partner in crime.” As deputy secretary of state, Huntsman might well install a network of neoconservative-leaning foreign policy mavens.

Overall, Huntsman’s record suggests someone who is more of a political chameleon than a foreign-policy figure who is on Trump’s wavelength. Centrist? Realist? Neocon? Huntsman can be all these things, or none of them, depending on what’s suitable for his own interests. “I don’t think he can be characterized as having any strong views on any key issues,” the former Republican official told me. Is that really what Trump wants at State?