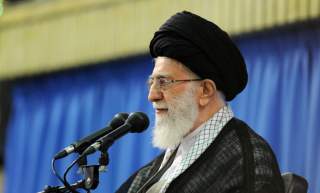 The looming nuclear deal will soon unshackle Iran’s economy from the burden of Western sanctions. Who stands to benefit from this opening?

While Iran’s public sector, state-controlled religious foundations, and the powerful Revolutionary Guard Corps are routinely named as the principal players in Iran’s economy, Princeton University’s Kevan Harris has recently dismissed excessive focus on the guards’ and the Supreme Leader Ali Khamenei’s control over the economy as “analysis via rumor mill and scholarship via scaremongering.”

Harris claims that the vast privatization drive Iran undertook over the past decade, while excluding neither the guards nor Khamenei, helped shape a more complex landscape, the main beneficiary of which is “the quasi-governmental sector.” Harris contends that “this large middle economic stratum is not under the steely hand of one monolithic organization sitting at the country’s commanding heights. Nor gripped by the inky tentacles of 10 organizations. Nor entangled in the spider web of 50 organizations.” A hard-nosed analysis of Tehran’s Stock Exchange and its publicly traded companies, continues Harris, can offer a more nuanced read of Iran’s new economic map.

There are sound reasons why Iran’s stock-market data provides a good insight into who controls Iran’s economy. The Iran Privatization Organization divested 55 percent of Iran’s state-owned assets through the stock exchange between March 2005 and March 2014. In the last year alone, 8.3 billion dollars of these assets were sold through the stock market. As a result, over the last decade, the stock exchange has gained more importance, though it is still a far cry from an accurate reflection of Iran’s economy.

The market value of Tehran’s Stock Exchange is currently about 87 billion dollars or about 21.5 percent of Iran’s GDP in 2014. According to the World Bank, that is much lower than the market capitalization of listed companies to GDP ratio for advanced postindustrial economies. It nevertheless opens a window into a country like Iran, which ranks 136 on Transparency International’s Corruption Index. Unlike most other sectors of Iran’s economy, the stock market is transparent in term of shareholders, market value and financial statements. Besides, the largest and, from an investment point of view, the most desirable firms in the country are listed.

Because the rest of the economy is not transparent, evaluating the influence of important players such as the revolutionary guards or the Supreme Leader inside the stock exchange can give at best a conservative estimate, as their powerful foundations have more leverage in the less transparent parts of Iran’s economy. Harris is correct in that it provides the most reliable method to estimate and paint the ownership and control structure of Iran’s economy.

We agree with Harris’ method, but we reject his conclusions.

While it is true that in 2005, the Supreme Leader launched a large privatization drive, mandating the government to sell most state-owned industries, the program did not exactly empower the country’s fledgling private sector. Its main beneficiaries were foundations controlled by the Islamic Republic’s deep state, including the military, especially the Revolutionary Guards and Khamenei. One can speculate about how dominant the economic position of these entities in the Iranian economy is. But there is no question that the IRGC, owing to this “privatization,” has gained significant influence over Iran’s economy and its political system.

What Harris calls “the quasi-governmental sector” is firmly in the hands of the business empires of the Supreme Leader’s and Iran’s military foundations, which are overwhelmingly in the hands of the revolutionary guards. Iran’s privatization drive is a prime illustration of what Italian author Giuseppe Tomasi di Lampedusa said in The Leopard: “Everything needs to change so everything can stay the same.”

We have been tracking the intervention of military foundations—both the Guard Corps’ and the armed forces’—into Iran’s stock market (the Tehran Stock Exchange) since 2011. Military-controlled companies are mostly concentrated in strategic sectors such as oil, mining, telecommunications, petrochemicals, automotive, banking and construction.

As of April, the portfolio of military foundations consisted of twenty-six publicly-traded firms with a market value of 17.5 billion dollars—almost 20 percent of Tehran’s Stock Exchange market value. The Supreme Leader’s business empire accounts for an estimated additional 5 percent through three foundations he controls: Setad Ejraiye, the Foundation of the Oppressed and Disabled (or Mostazafan Foundation) and Rey Group. We estimate that together, they control one fourth of the stock exchange.

How did we reach this conclusion?

We have used extremely conservative criteria: our estimate includes only companies where Iran’s military or Supreme Leader representatives control at least 50 percent of the shares or a majority of seats on the board of directors, thus having the final say on company policies. One could use less stringent criteria. It is a common practice in finance to view a 20 percent ownership as a controlling stake. Relying on this lower threshold, the guards, the Supreme Leader and other powerful state actors own a much larger share of the pie.

Take Mellat Insurance, for example—a company that does not meet our threshold. The guards hold at least 27.76 percent of its shares. Tadbir Group—the principal financial investor for the Supreme Leader’s Setad foundation—holds another 1.13 percent. Jointly, they own 29 percent and hold two seats of the five-seat board. On paper, the guards and the Supreme Leader are in the minority. But when one considers that the other members of the board represent three government-controlled entities (Saba Tamin Investment, the Civil Servants Pension Organization and Saba Investment), it is hard to believe that given Iran’s political system, the guards and the Supreme Leader won’t carry the day. As Reuters’ extensive expose of Setad, the Supreme Leader’s financial empire, noted: “In practice, Setad controls many businesses in which it holds very small stakes. Reuters identified at least 24 public companies in which Setad—or a company it invested in—held less than 50 percent.”

And there’s more. The guards and Supreme Leader own assets not traded on the Tehran Stock Exchange. While hard to calculate, these assets greatly expand the value of their overall stake in Iran’s economy. Again, Reuters’ expose estimated that Setad’s real-estate portfolio is worth 52 billion dollars, minority stakes in publicly traded companies at 3.4 billion dollars (in 2013), and Setad’s overall worth at about 95 billion dollars. As for the guards, we have identified 218 nonpublicly traded firms directly owned by the IRGC Cooperative Foundation and eighty-five firms owned by the Basij Cooperative Foundation. They, in turn, own numerous subsidiaries.

Finally, the Guard Corps and other military and paramilitary forces have a high share of Iran’s underground economy, estimated at somewhere between 6 to 36 percent of Iran’s GDP, which includes commissions from smuggling operations and reportedly a hand in the drug traffic that crosses Iran on its way to Europe from Afghanistan. Putting a price tag on such activities is difficult. Relying on their stock-exchange ownership is an adequate, though obviously incomplete, indicator of their financial clout. But to claim that the privatization drive has created a more complex picture of corporate ownership is to miss the forest for the trees.

Highlighting the Revolutionary Guards’ and the Supreme Leader’s overwhelming clout over Iran’s economy isn’t “scaremongering.” These are hard facts, especially for those who believe that any coming postsanctions boom will diversify Iran’s politics and strengthen the ever-elusive Iranian party of moderation. Privatization has largely benefited Iran’s deep-state—the ubiquitous military-industrial complex and religious foundations and holding companies close to the Supreme Leader. If a nuclear-deal windfall arrives, theses two groups will surely benefit handsomely.

Emanuele Ottolenghi is a Senior Fellow at the Foundation for Defense of Democracies and at its Center on Sanctions and Illicit Finance, where Saeed Ghasseminejad is an Associate Fellow.