Who Suffers the Most from Government Shutdowns? 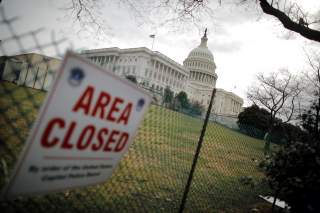 The federal government shutdown of 2018—or, at least, the first one—ended with only one workday missed. To the extent ordinary citizens noticed at all, they likely think it was no big deal. This is especially true with regards to the impact on the U.S. military, who they’ve been steadily assured went right on working, without so much as having to endure the hardship of missing the weekend’s NFL playoff games. In fact, however, millions of man-hours of productivity have been lost from this continuing crisis, with a real impact on readiness.

Secretary of Defense Jim Mattis issued a memorandum at the onset of the shutdown declaring, “We will continue to execute daily operations around the world—ships and submarines will remain at sea, our aircraft will continue to fly and our warfighters will continue to pursue terrorists throughout the Middle East, Africa, and South Asia.” While that absolutely happened—and would have continued for quite some time even in an extended shutdown—that’s not all his department does on a daily basis.

While current operations continue, many training and support activities cease—especially those that require travel. Military students at resident courses, including the one where I teach, are allowed to remain in place to continue their studies, but their civilian faculty are sent home. Ongoing field exercises are typically suspended, with personnel required to return to home station. And, depending on which pots of money they’re paid from, students at nonresident schools are often sent home mid-course, only to have to come back at a later date.

At my own institution, which has a roughly even mix of military and civilian faculty, we were able to weather the 2013 shutdown with only modest inconvenience. While we were in the middle of a block of instruction taught by civilian PhDs, we were able to slide lessons taught by lieutenant colonels and commanders to the left.

This go-around, we happen to be in an elective period, and because we have several outside faculty teaching, adjusting the schedule was impractical. Had the shutdown continued another day, the classes designed and normally taught by the furloughed PhDs would have been picked up mid-term by colonels and lieutenant colonels with twenty-four hours to prepare. It was likely the best out of a set of really bad options, but it would have not only been a suboptimal outcome for the students—themselves majors and lieutenant commanders deserving of the best education we can provide—and put the new instructors in an incredibly awkward position, but it would have taken up valuable preparation time for upcoming classes and exercises led by those same officers.

Additionally, while the military students would have remained in the course, their interagency civilian colleagues were furloughed for the duration. During the 2013 shutdown, which lasted sixteen days, this meant that not only were students from the CIA, State Department, and other agencies missing a significant chunk of the curriculum, but the military students were missing the invaluable perspective that they’re in the room to provide. And, because they’re staffed almost exclusively by civilians, the library and similar critical support facilities were closed, as were all manner of base programs and services for the troops and their families.

As I noted in this space after the October 2013 shutdown, the best estimates are that it costs between $2 billion and $4 billion to prepare for a government shutdown and the same amount to get back up and running. And, while this was the first actual shutdown since then, there have been more than a dozen near-shutdowns in the interim, as we continue to fund the government by continuing resolutions, often mere weeks at a time, and play a constant game of chicken with the debt ceiling.

Beyond the financial cost, of course, there is the impact on morale. DoD civilians constantly worry about being furloughed and whether the next paycheck is coming—including right before Christmas this past year. Then-Secretary Chuck Hagel declared “we can’t continue to do this to our people, having them live under this cloud of uncertainty.” If anything, it’s gotten worse, given the frequency of the brinkmanship.

Perhaps worse than the uncertainty is the constant reminder that we’re less valued. While we’ve finally gotten rid of the insulting “essential” vs. “nonessential” label, opting for the more sterile “exempt” and “nonexempt,” the fact remains that the vast majority of the civilian workforce is considered expendable while every single uniformed member of our armed forces is considered mission-critical—even though they’re frequently doing the identical job.

The flip side of that is that, as Mattis declared in his memo, “active forces will stay at their posts adapting their training to achieve the least negative impact on our readiness to fight.” For the duration of the shutdown—and, again, this one was thankfully short—our soldiers, sailors, airmen, marines, and coast guardsmen pull double duty, doing their own jobs while trying to cover for the furloughed civilians.

This is a great cost to the nation and its armed forces for no obvious gain. Historically, Congress has always authorized and the president always signed off on back pay for employees furloughed during a shutdown, so we’re actually paying people not to work. Like the debt ceiling, wherein Congress periodically has to authorize borrowing the money it has already voted to spend or else put the nation in peril, it’s an absurdity that needs to end.

In the meantime, we’re scheduled to go through this farce again on February 8.