Who Was behind Sri Lanka’s Easter Terrorist Attacks? 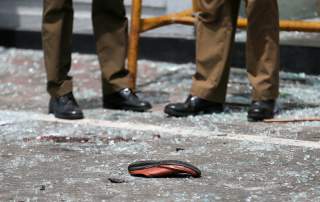 To millions of Sri Lankans the Easter Sunday tragedy must have seemed a nightmare come true, a frightening déjà vu of the rampant violence this island nation has known for thirty years of LTTE terror (Liberation Tigers of Tamil Eelam). The horrific attacks in which estimated 253 lost their lives and many hundreds were wounded signaled that the decade’s calm that prevailed after LTTE’s 2009 destruction by Sri Lanka’s Army is over.

At the time, victory over the LTTE inspired confidence and heady optimism. A 2012 defense seminar in Colombo (in which two of the present authors participated) heralded “Peace and Stability” as its core theme and the five Rs (Reconstruction, Resettlement, Rehabilitation, Reintegration and Reconciliation) as the imperative agenda for Sri Lanka. The mood at the time was upbeat and the country’s future seemed bright. The safety of the post-war period brought to the country millions of tourists (2.1 million in 2017 alone) and the reconstruction of Sri Lankan economy and infrastructure commenced apace.With the horrific Easter disaster, this process has come to a grinding halt. And the troubling question is what developments allowed it to happen.

There is no unique answer to this query. Rather, four distinct factors converged to enable the Easter bloodbath: (1) political developments in Sri-Lanka in the post war period, (2) dysfunctionality of the current government, (3) the regional penetration of the Islamic State in South and Southeast Asia, and (4) collaboration of the perpetrators with radicalized networks and groups.

Postwar political developments. The military campaign that decisively defeated the LTTE was carried out by a Sri Lankan government (2005–2015) led by Mahinda Rajapaksa as president with Gotabaya Rajapaksa as secretary of defense. It was a bloody campaign fueled by the government’s resolve to end the thirty year war in which estimated 150,000 people lost their lives. The intensity of the fighting, particularly in its final stages, brought allegations of human rights abuses against the Sri Lankan military, and resulted in its condemnation by parts of the international community (including the United States, the UK and the UN). In the postwar period, the Rajapaksa administration continued its strict emphasis on security while rehabilitating the vast majority of the LTTE terrorists and reintegrating them into society. During that time, Sri Lanka earned the reputation of a safe and appealing travel destination and millions of tourists from around the world flocked to its shores and enjoyed its attractions.

This was not to last, however. As often happens, war-time governments and leaders (e.g. Winston Churchill) tend to lose their appeal in peacetime. Whereas Rajapaksa’s resolute leadership managed to unify the majority of Sri Lankans behind the war effort, over time cracks began to appear in its support. Sri Lankans grew accustomed to their newly gained security and began taking it for granted. Complacency set in. The Rajapaksa administration faced allegations of corruptions and of human rights abuses during the war. By the time of the 2015 elections, it faced stiff competition and ultimately was replaced by government formed by a broad melange of factions headed by Ranil Wickremesinghe’s United National Party (UNP) as Prime Minister and Maithripala Sirisena as President. Beyond the UNP, the coalition included the Sri Lanka Freedom Party (SLFP) faction of Rajapaksa’s United Peoples Freedom Alliance (UPFA), as well as Tamil, Muslim, Communist and Nationalist parties. Naturally, its policies accommodated the demands of the Tamil and Muslim coalition partners, were pro-Western in orientation and adopted the criticisms of Rajapaksa’s policies as nationalistic and militaristic. Correspondingly, it loosened the “tight” policies of their predecessors, dismantled their security network, lowered the alertness to potentially subversive activities, and denied reports about Islamic State growing influence, and of resurgent separatism. It turned a blind eye to attempts to re-radicalize the Tamil population, ignored Muslim radicalization and failed to check Buddhist anti-Muslim extremism. The normative “looseness” that ensued allowed the emergence of criminal gangs, and a general rise in crime.

Dysfunctionality. Despite repeated and detailed warnings from local and international intelligence services as to impending attacks in Sri Lanka by the National Thowheed Jamaat (NTJ) group and its ties to Islamic State, the Sri Lankan government failed to react, thus bearing partial responsibility for the horrific loss of life that took place. The puzzle of their passivity in light of the clear and present danger is, nonetheless, explicable by political psychology: The Wikremesinghe coalition included Tamil and Muslim parties who played the role of essential “kingmakers.” Clamping up on the brewing Tamil re-radicalization or on rising Muslim extremism would have been anathema to these indispensable political partners (Dharmawardena, 2015–2016); this induced the motivation to ignore warnings that would necessitate politically problematic decisions. That inclination was compounded by the government’s reluctance to take steps that would invite allegations of nationalism and militarism. Motivated closed mindedness to critical information that, if heeded, would have prevented major debacles (e.g., Hitler’s Operation Barbarossa, or Arab states 1973 Yom Kippur attack on Israel) is well documented. Paralysis of the Sri Lankan government despite ample warnings reflects this fundamental psychological process.

Islamic State regional penetration. A troubling development made salient by the Sri Lanka attacks is Islamic State’s deep penetration into South and Southeast Asia. Particularly after the collapse of its Caliphate but also prior to its downfall, Islamic State has been sending its tentacles into the region and successfully co-opting local jihadist movements by harnessing them to its global cause. In the Philippines, the Abu Sayyaf Group was recognized by Islamic State as its official Willayat (governance), in 2014 Abu Bakkar Baysir, leader of Indonesian Jemmah Islamiyah pledged allegiance to Abu Bakr al Baghdadi, leader of the Islamic State, in Bangladesh the Jamiatul Mujahidin Bangladesh became an official Islamic State affiliate—the list is long. The spread of Islamic State influence in the region did not spare Sri Lanka. In 2015, 41 of Sri Lankan Muslims citizens traveled to Syria to joint the Islamic State fight and local groups like the NTJ committed to the jihadi agenda. The Sri Lanka government banned two groups responsible for the Easter Sunday events. The NTJ, held responsible for radicalizing and inciting violence, and the JMI (Jamathei Millathu Ibraheemi Seilani) held responsible for recruiting radicalized NTJ members for attacks.

The recent Sri Lanka attack constitutes a spectacular victory for Islamic State, second in its impact only to Al Qaeda’s 9/11 inglorious achievement. The precise coordination of attacks in multiple sites, their lethality, and the display of diverse assault styles, “citing” different well known prior operations (attacks on churches, hotels, public venues, train tracks) sends a powerful message that Islamic State is alive and well, that the news of its demise is grossly exaggerated, and that “jihad 3.0” is on.

Collaboration with other groups and networks? While the LTTE was conclusively dismantled in Sri Lanka, it remained intact in the Tamil Nadu part of Southern India. The NTJ and the JMI, appears to have broken away from the Sri Lanka Thowheed Jamath (SLTJ) that evolved from the Tamil Nadu Thowheed Jamath (TNTJ). Given the link to Tamil Nadu, whether NTJ and JMI utilized the logistical network, the drug and crime grid in Sri Lanka previously used by the LTTE, is yet to be seen. Terrorists groups with common enemies are known to share resources, capitalizing on each other’s capability and intelligence. This includes radicalizing the community, recruiting members, transportation of explosives, the placement of bombers, accessing information and evading security. NTJ and JMI therefore are likely to have had a head start in radicalizing and operationalizing it's global Islamic State ideology, locally in Sri Lanka.

The world’s stunned response to the Easter Sunday massacre is owed in part to the fact that some of its targets were Christians. Indeed, the Sri Lankan small Christian minority (about 7.4 percent of the island’s population) would seem an unlikely target in a country riveted for decades by a war on LTTE terror in which Christians as well as Muslims played a vital role. The puzzle unravels, however, considering the attack from a global perspective: There were ideological as well as practical reasons for targeting Sri Lankan Christians. From the ideological perspective, Christians are the Muslims’ iconic enemy and the depiction of contemporary Christians as latter day Crusaders permeate the rhetoric of Islamist extremists, including the April 23 communique in which Islamic State claims responsibility for the attack. It cannot be ruled out, furthermore, that the specific timing of this attack was at least partially influenced by the Islamic State call for vengeance (enunciated by Abu Hassan al Muhajir, its spokesman) for the recent Christchurch massacre in New Zealand.

Equally compelling are the practical (strategic and tactical) reasons for assaulting Christian churches. Strategically, places of worship are venues of mass assembly; this promises spectacular lethality and an appreciable world attention of pivotal importance to Islamic State. Tactically too, Christian churches in Sri Lanka have constituted relatively soft targets as compared to, say, Buddhist temples that are more carefully watched (in light of the long lasting LTTE insurgency against the Buddhist Sinhalese). Finally, note that the churches were only three out of the twenty sites under attack suggesting that the operation meant to maximize casualties rather than targeting Christians uniquely.