Who Will Be Trump's New Immigration Enforcer? 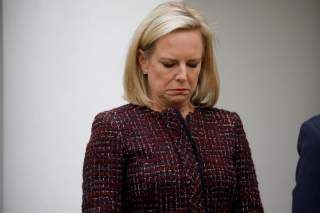 WASHINGTON— “‘Lady DACA’ is out,” gloats a veteran Republican activist close to the White House on the resignation of Department of Homeland Security Secretary Kirstjen Nielsen, who in her tenure accomplished the notable feat of courting widespread scorn from both right and left.

When we met Sunday night, my source stepped out to take a call from Kris W. Kobach, President Donald Trump’s aspirant immigration stickler, and folk hero of the border-hawk right. The president’s opponents are trying to preempt the worst. “Kirstjen Nielsen enforced cruelty at the border,” opined the New York Times editorial page. “Her replacement could be worse.”

If Nielsen’s downfall was sitting on both sides of the fence so much so that she was impaled by it, Kobach is making no such mistake. And if the president indeed taps the former Kansas secretary of state—last year he pledged to hire Kobach if he lost his bid for Kansas governor, which he did—it will be a declaration of war.

The White House, struggling to explain its failure to construct a border wall, views an all-hands-on-deck salvo on immigration as imperative ahead of 2020: even if it fails, the president can then blame the Democrats, and stress the need to retake the House of Representatives. Senate confirmation for Kobach would be “tough,” says a former senior administration official, “but [Trump] has to.”

Last week, Kobach, who as I’ve reported was offered the Department of Homeland Security job during the 2016 transition, resurfaced on the national stage with news that he could seize the mantle as the president’s new “immigration czar.” Now the stakes are further raised: his confirmation fight would be a show.

For Kobach, the immigration czar position would have followed the path trotted by John R. Bolton, the national security advisor, who also likely would have struggled in his confirmation fight, if offered another position, namely: secretary of state, which he coveted. But Bolton’s been more formidable heading the National Security Council, having been saved from an unsparing inquisition before the upper chamber.

But if the administration’s goal is fireworks, a fight in the Senate, still controlled by the GOP, may be just what the doctor ordered. Two sources close to the White House say they like their chances: though Sens. Collins and Murkowski would be likely “no’s,” the unpredictable Sen. Lindsey Graham would lean toward a “yes,” as would Trump whisperer Rand Paul. Blue dog Democrat Sen. Joe Manchin and deeply vulnerable Alabama Sen. Doug Jones, could also conceivably be counted on.

For his part, as Bolton once did, Kobach is openly auditioning for a job in the press. In recent days, he’s impressed to the immigration-hardliner reporter John Binder at Breitbart News the need to abolish migrant remittances to Mexico. The administration has repeatedly emphasized that it sees the immigration matter as a national security imperative. Kobach has also argued, as have others, that if the president so desires, he can initiate a broad range of executive maneuvers—with or without Congress. Doug Macgregor, a foreign policy realist in the administration orbit, wants troops on the border—ASAP. Immigration, and this century’s confrontation with China, are the two matters that most divide realists.

Should Trump, as erstwhile supporter Ann Coulter suggests, go all nebbish on the matter, he could stick with a stopgap. Kevin McAleenan, the U.S. Customs and Border protection head, was named acting secretary Sunday night. Critics were quick to point out that Trump currently employs: an acting chief of staff (Mick Mulvaney), an acting secretary of defense (Patrick Shanahan), and an acting immigration chief. But there’s a Solomonian calculus in such arrangements: none of these three men cause a rupture in the president’s political base. For border hawks, worse alternatives abound. Rick Perry, the energy secretary, would be the “Keep America Great” choice, a former White House official told me, derisively, in reference to the opera bouffe spectacle of Trump running for re-election on a wall he has not built.