Who Will India Call to Help with Its Energy Crisis: America or Russia? 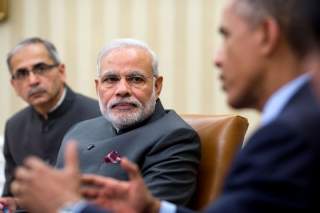 With the United States and China having announced an agreement on climate change, all eyes are now on India—the world’s third-largest emitter of greenhouse gases.

The best way for Washington to help India mitigate the effects of climate change is to heavily engage the new Indian government of Narendra Modi on energy—from availability and affordability to environmental impacts and security. President Obama will have a golden opportunity to initiate this engagement in January, when he is scheduled to visit India. Such engagement can be a springboard for broader cooperation for what both Democrats and Republicans alike agree is one of the twenty-first century’s defining partnerships.

Unlike the United States or China, India faces an immediate energy crisis. It threatens India’s ability to create a modern economy that lifts hundreds of millions of Indians out of some of the planet’s most abject poverty. Even after experiencing the largest blackout in human history in 2012 (it affected over 600 million people), India still has massive power deficits. With some 25,000 to 50,000 megawatts of power inoperative or “stranded” for lack of fuel (as compared to a total installed capacity of about 250,000 megawatts), India consumes only about 700 kilowatt hours of electricity per person, per year. For China, this figure is 3,300. For the United States, it is 13,000.

Russian president Vladimir Putin is going to New Delhi this month with promises to address India’s energy needs. The Russians say they intend to do this chiefly by sending natural gas to, and building more nuclear power plants in, India.

Both India and the United States rank economic growth as priority number one on their respective national agendas. Modi recently launched a “Make in India” initiative to boost manufacturing capacity to the same high level as services, and to create jobs for the millions of young Indians entering the workforce each year. However, Modi is acutely aware that his initiative cannot succeed unless India has enough energy to keep the lights and power on for the critical manufacturing and transportation sectors. And today, India simply doesn’t have enough energy to do so.

The Modi government has taken encouraging steps by altering the price of diesel and changing the formula for pricing domestically produced natural gas. Solar power has been given a boost with the announcement of new projects and off-grid initiatives.

And yet further reforms are urgently needed. No energy system can work when approximately a third of electrical power is either not paid for or outright stolen. India doesn’t need more studies and advice; it needs action in the form of end-to-end solutions—and particularly ones in which the United States can be a major partner.

Here’s the upshot: The United States must promote broad-based, holistic energy engagement with India. This is far more likely to achieve U.S. climate change and strategic goals in the India context than is a more limited approach that simply views the Indian energy crisis through the narrow lens of climate change.

President Obama recognized this as recently as June 2013, when his Climate Action Plan was announced. It identifies natural gas, nuclear power, clean coal and renewables as key elements of U.S. leadership on international efforts to address climate change. This makes for particularly good policy in India, where about two-thirds of energy comes from dirty coal and even dirtier noncommercial biomass.

And yet today, U.S. diplomacy with India has not embraced this broad, deep approach to energy. Russia—a nation that Modi referred to this past summer as “India’s best friend”—stands ready to fill the gap.

If the United States is to compete with Russia on energy and to meet U.S. climate change and strategic goals with India, then Washington needs to engage on energy across the board. This will necessitate some key policy changes. America needs to end its protectionist measures in the natural gas and oil sectors. In the case of gas, the United States currently discriminates against countries like India that do not have a free-trade agreement with Washington. In the case of oil, the United States prohibits the export of crude—even though it does not have the capacity to refine all the light sweet crude it produces. Significantly, India has the capacity to refine this type of oil.

Additionally, the United States and India need to better engage on coal, which is India’s leading source of energy. Unless progress is made toward moving away from this dirty fuel, any significant progress toward cleaner air is a pipe dream. And the consequences of more dirty coal are deeply troubling for India, where cities are already some of the most polluted in the world. Some researchers believe India could one day be the world’s biggest greenhouse gas emitter.

U.S.-Indian energy engagement represents a great opportunity to bring the two countries closer together. And yet, with Putin due in India soon, now is a pivotal moment. Either the United States and India will seize this energy diplomacy opportunity, or India will form closer energy relationships with authoritarian regimes such as Russia.

Raymond E. Vickery, Jr., a former Assistant Secretary of Commerce in the Clinton Administration and a former Public Policy Scholar at the Woodrow Wilson Center, is Of Counsel, Hogan Lovells and Senior Advisor, Albright Stonebridge Group. He is the author of India Energy: The Struggle for Power, a new report published by the Wilson Center this week. Michael Kugelman is the senior associate for South Asia at the Wilson Center. The views expressed in this article are their own.