Who Will Lead Russia after Putin? 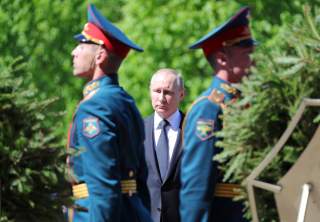 It is always risky to make definitive pronouncements about the future prospects of Russian politicians. Now that Vladimir Putin has started his fourth term as Russia’s president, we again start discussions of who his potential successor might be, since, unless the Russian Constitution is changed, he will run up against the prohibition of holding more than two consecutive terms in office. Moreover, there is the simple reality of biology: at some point, Putin will no longer be capable of wielding supreme executive power—and he will either want to be able to enjoy his retirement or to have preparations made to secure his legacy once he has departed from this mortal vale.

But recall that after Boris Yeltsin’s re-election in 1996, and for the subsequent two years that followed, the name “Vladimir Putin” never appeared on any of the lists compiled by Russian and foreign experts of likely presidential successors. There is a high probability that the next person who occupies the presidential chair in the Kremlin is someone who is not on the radar of anyone in the analytical community right now—someone who at this moment may be laboring in near-obscurity in a provincial center or in the mid-level echelons of the government. Moreover, Dmitry Medvedev, who was nominated to serve once again as prime minister, submitted to the Duma the outlines of a new cabinet that displaces some of the people, like former deputy prime minister Dmitry Rogozin, who consistently have appeared on the lists of Russian presidential papabilie.

In some ways, focusing on names and playing the games of “who’s in” and “who’s out” distracts us from the more important analytical questions: to identify the features of people Putin is likely to need and want in positions of power in the coming months and years.

If we think of Putin’s tenure in office as a play, then the first act was to arrest the alarming decline and collapse of the Russian state. The second was to reverse those negative effects and to commence the rebuilding of Russian capabilities, a mandate that continued through the period of the tandem when Putin served as prime minister in Dmitry Medvedev’s administration. The third act is, from Putin’s point of view, one of tragedy. Rereading his election manifesto of 2012, the return to the presidency was supposed to be marked by Russia’s return as one of the world’s great powers—something that the Sochi Winter Olympics were to display. The Ukraine crisis, however, derailed Putin’s plans; it has led to a growing estrangement of the West and the prospect of Russian disintegration and isolation from the global economy.

The curtain rises on Putin’s fourth act, therefore, in the midst of a new crisis, and the first scenes will be the search for the exit from that crisis. Whether this comes about because of a new strategic partnership with China, or the restoration of pre-existing ties with Europe (following along the lines of French president Emmanuel Macron’s call for a new ‘historic dialogue’ between Europe and Russia), Putin must reconceptualize the basis of Russian economic and strategic power. To the extent that Dmitry Medvedev may not be up for that job, the stage has been set for Putin to bring back into the halls of power his economic “emergency man,” Aleksei Kudrin. At the same time, Putin must generate a new social contract with the so-called “Generation P”—younger Russians whose formative experiences were not Soviet collapse and Russian degradation of the 1980s and 1990s, but who came to political maturity amidst the prosperity and opportunity of the 2000s.

The play must then continue to the denouement of the fourth act: consolidation. The system Putin created must be able to outlive its creator and show its prowess at perpetuation, in order to secure his legacy.

For the first part of the fourth act, we should expect a certain degree of continuity in Russian governing affairs, which is why the proposed Medvedev cabinet retains key figures like finance minister Anton Siluanov, who would also be promoted to become a deputy prime minister. Getting through the existing problems—the economy, Ukraine, Syria and instability in the Eurasian space (Armenia may be a harbinger for developments in Belarus and Kazakhstan)—is the immediate priority. But then it will be time to begin the handoff to a new political generation.

Sergei Kiriyenko, the former prime minister and the first deputy head of the presidential administration, has been spearheading the recruitment and testing of new cadres. The provincial governorships are one of the new training and proving grounds for the next generation of Russian executives to demonstrate their chops. Kiriyenko has made it a priority to develop lists of new candidates “under 50” who can be promoted into higher positions—reflecting that Putin’s team has absorbed one key lesson of the Leonid Brezhnev era of stagnation: relying on the same cohort of people to age in office and to provide no light at the end of the political tunnel for younger figures to seek advancement will create the same conditions which destabilized the Soviet political order.

At the same time, this next generation must be willing to extend the set of guarantees that Putin and his associates will demand for protection of their property and the assets and influence wielded by their families. Russia may not qualify under Robert Dah’s definition of what constitutes a mature democracy, but the ability of Mikhail Gorbachev and Boris Yeltsin to peacefully retire and not face arrest, detention or exile contrasts favorably with the experience of other post-Soviet states, notably Georgia, where no post-Soviet president has enjoyed that level of security.

Medvedev did not indicate candidates for all the cabinet slots in his presentation to the Duma, so we may see the first new faces brought up from the minors to have their shot at the Kremlin “show.” Meanwhile, the turnover among Russian governors continues so that a majority are now people who are Russian equivalents of Generation X or Millennials—not Putin’s KGB-era cronies or figures from his time in St. Petersburg city government.

There is also a practical implication for U.S. policy. Over the last several years, many of the normal channels of U.S.-Russia interaction have been disrupted. Many of the rising members of the new political generation in Russia, while possibly having some exposure to the West in their younger years, particularly if they took advantage of educational opportunities, are now no longer interacting with their American counterparts. Economic Development Minister Maksim Oreshkin—a thirty-five year old member of the cabinet—has made several trips to Washington, and is known to some members of the business community, but largely remains unknown to the larger policy community—even as he is said to be on the short list for future prime ministerial candidates. A number of the more prominent younger governors who might be tested out in the future as presidential timber are also unknowns. Dialogue with Russians is not a reward for good behavior, but an important tool of statecraft that can serve U.S. interests by giving us knowledge and exposure to those who are likely to be running Russia in the future.

Image: Russian President Vladimir Putin during the ceremony to lay flowers at the Tomb of the Unknown Soldier in Alexander Garden in Moscow, Russia May 9, 2018. Sputnik/Sputnik/Mikhael Klimentyev/Kremlin​