Who Will Stand Up to China This Year? 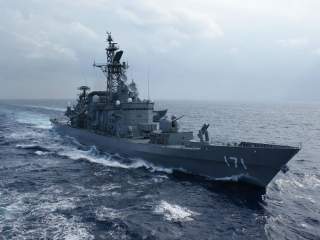 The growth of the South China Sea as a primary area of concern of the U.S.-Japan alliance, second perhaps only to the Korean nuclear threat, is one of the main trends of the past four years. The East China Sea, once a serious concern, has receded in the background as China—under Xi Jinping’s direction—has turned its attention and focus on securing Chinese pre-eminence inside the Nine-Dashed Line. This coming spring, the Philippines’ court case on the legality of this line will be decided by the Permanent Court of Arbitration in The Hague. By many accounts, and by the weaknesses inherent in China’s claims, the finding is likely to be in Manila’s favor.

American and Japanese alliance managers must now think through what the consequences of such a finding will be. Clearly, such a finding will not change or reverse China’s grand strategy within the sea. Xi Jinping is said to strongly favor the strategy, as do various domestic constituents in the military, state-owned energy enterprises and fishing-related industries. Atop all of that is strong public support for China’s claims among the public. Furthermore, China has already intimated it will not be bound by any ruling.

Whatever the case, the ruling presents a landmark situation in which the legitimacy of China’s regional strategy will be challenged at the global level. How will Beijing react to such a finding? How will it react to having its strategy cast as “illegal”? Many in Washington predict that China will react by proclaiming another Air Defense Identification Zone, to match the one established in the East China Sea. In the National Interest, Harry Kazianis has argued that a Chinese ADIZ in the South China Sea is just a matter of time. Some like Chinese thinker, Feng Zhang, have attempted to argue that China only establishes ADIZs in reaction to provocation, firmly pushing responsibility for its actions on others. Some like Prashanth Parameswaran have argued that the ADIZ is being established in practice by the building of these airstrips in the Spratlys, and the posting of missile systems in the Paracels.

Whatever the outcome, it is vital that the U.S.-Japan alliance begin formulating a common policy on such a move, using the still-new Alliance Coordination Mechanism (ACM). Any reaction should be strategic, political and economic. In the first instance, the obvious strategic reaction is for the United States Navy or Air Force to ignore the declaration and immediately fly through the ADIZ. While it may be too much of a push, it would be an incredibly forward-leaning move for Japan to consider doing the same. Washington and Tokyo may even prevail upon Canberra to do the same. Both Japan and Australia have maritime surveillance aircraft. Contingent on the full support of the Philippines, they might fly their AP-3C Orion aircraft and Kawasaki P-1 out of the Philippines, therefore making it a four-nation effort. For too long, there has been a fear of pushing China into a corner by multilateral action. Such fear has stymied all reasonable efforts to shape Chinese behavior.

The legal case and any accompanying Chinese escalation present the U.S.-Japan alliance with an incredible diplomatic opportunity, both in the region and among China’s trade partners in Europe. China’s ever-increasing encroachment on the rights and territories of other states goes against regional norms, and its implicit threat of force flies against regional attitudes toward problem solving. Showing them in contradiction of international law undermines Chinese credibility in a number of ways. Regionally, U.S., Japanese, Philippine and Australian diplomats should brief ASEAN member states before the ruling comes out on the complexities of the case, and encourage a common view of legality. U.S.-Japanese alliance managers should not fool themselves. This will not be easy, as many states share some aspects of the Chinese approach toward UNCLOS. However, in negating the Nine-Dashed Line, the ruling has the power to unite the various claimants over what is unacceptable.

If gaining a diplomatic consensus will be difficult, it stands to reason that developing common policies may be a bridge too far, however, getting a regional consensus will put China on a back foot for the first time in a long time. For too long, the Philippines has borne the brunt of this diplomatic and legal battle. Japanese and American leaders should put the issue on the agenda of any meetings that occur with ASEAN states, and certainly, Defense Secretary Ashton Carter should promote a common understanding of it in October at the Hawaii ASEAN-U.S. defense bilateral.

Japanese, American, Philippine and Australian diplomats should carry the message to the European corridors of power. For too long, there has been a drift in European policymakers from global and Asian affairs, encouraged by the long Middle East crisis and recent Russian revanchism. The fact that the case is being seen at the Permanent Court of Arbitration at The Hague is a major diplomatic opportunity. The finding is literally happening in the EU’s backyard and its attendant organizations and institutions. Furthermore, the Court, its legality, its legitimacy, and its place in the current rules-based system represent all that is best of European peaceful dispute settlement bodies. They should be encouraged that the finding is not an “Asian issue”, nor a “U.S.-China” issue, but an argument about the future of the global order. It is a conversation where they must be represented.

Naturally, being chided by their European partners will not dissuade Chinese encroachment, but it will shape perceptions of European elites, particularly in the security and policy field. China has thus far had a fairly benign reputation in Europe. The past year’s steel dumping, combined with the flaunting of a decision by a major legal institution based in Europe will play badly in the year that the EU decides if it will grant China market economy status, as stipulated in the WTO accession requirements. It may also dilute the enthusiasm of some of those European politicians who see China in an all-too-rosy light. George Osborne, the British chancellor and a strong possible for prime minister, has promoted a strong trade relationship with Beijing that is more in keeping with the optimistic China policies of the 1990s.

All of this is by way of saying that, short of war, there is nothing the U.S.-Japan alliance can do to stop China from continuing its current strategy in the South China Sea. However, the alliance can whittle down Chinese soft power, prestige and legitimacy both regionally and globally. It is difficult to say how much this will affect Chinese calculations, but it at least gives opportunity to exact a cost. Furthermore, it puts a diplomatic multilateral solution one step closer to reality by giving the various parties—minus China—a common operating picture. That may not seem like much, but cohesion would mean a world of difference going forward.

John Hemmings is an Adjunct Fellow at the Pacific Forum CSIS and a doctoral candidate at the London School of Economics (LSE), where he is working on U.S. alliance strategy in the Asia-Pacific. Follow him on Twitter: @johnhemmings2.