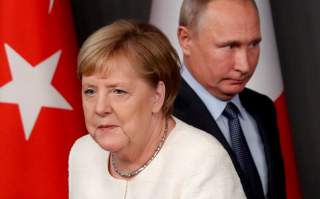 When German chancellor Angela Merkel started attending her first international summits, she would mingle with Tony Blair, Jacques Chirac and George W. Bush. All are long gone—but until today Merkel appeared to be the permanent stabilizing fixture in international politics. Since the advent of Donald Trump Merkel has been widely perceived as the defender of the liberal international rules-based order reflecting western values of liberty and human rights.

The day after state elections in Hesse, home to the financial center of Frankfurt, Merkel de facto announced the beginning of the end of her political life. She quashed all speculation that she might seek a prominent job in the European Union (EU) or even in the United Nations. Without prior consultation even within her inner circle, she took herself off the table. From now on she is a lame duck. After eighteen years at the helm of the Christian Democratic Union (CDU) and twelve years as chancellor, Angela Merkel had no choice but to begin her exit from German politics.

The dismal loss of her party in last Sunday’s local elections in Hesse—the CDU dropped from 38 percent to 27 percent, while the Greens and Alternative Party for Germany did well—signaled the continuation of a nationwide downward trend. Two weeks earlier the sister party of the CDU—the Christian Social Union (CSU)—suffered a similar blow in Bavaria. And so, Merkel had little choice but to announce that she will not seek reelection as the chair of the CDU during the upcoming party convention this early December. Whoever will be elected as the new chairperson will most certainly run as the CDU’s candidate for chancellorship during the next federal elections. Everything else in the increasingly fragmented German political landscape appears uncertain.

The chancellor officially will not back any of the four or five candidates for the party chair. In reality Merkel would enjoy passing on the baton to Annegret Kramp-Karrenbauer—often referred to as AKK—the CDU secretary general whom Merkel recruited early this year from the small southwestern state of Saarland. AKK had served for seven years as a popular premier of Saarland. She is popular among the grassroots membership of the CDU. Critics prematurely expect her to continue as “Mini-Merkel,” adhering to the chancellor’s political course towards the left and supporting Merkel’s ill-fated stand on immigration and political asylum. She is a practicing Catholic and has a calm and analytical approach to politics. Her social conservatism, combined with her emphasis on the social imperative as an inherent element of market economies, could well be a winning concept for today’s Germany. This past July, AKK extensively toured the United States and delivered a keynote speech at the National Governors Association (NGA) in Santa Fe. She was very well received.

Jens Spahn, a long-time critic of Angela Merkel, already announced his candidacy for party chairman. Merkel felt the need to integrate him into her cabinet as federal minister for health. He clearly represents the right-wing within the CDU and is not shy about repudiating political correctness in his political discourse. His brashness and impatience, however, may not be appreciated by the delegates to the CDU party convention this December.

Another possible contender is Friedrich Merz. Merz has long been seen as the most prominent loser of Merkel’s ascent to the top. She effectively outmaneuvered him some fifteen years ago as an ambitious Member of the Bundestag. He resigned from the Bundestag in 2009 and has become a prominent attorney, investment consultant, and leader of the German “Atlantik-Bruecke,” an organization promoting close U.S.-German relations. His skills as a financial expert and communicator are well-recognized across the political spectrum and would certainly add intellectual firepower to the CDU leadership. But delegates rarely vote according to IQ and international connectedness. The blunt fact is that Merz has been “out of office” for too long for most delegates. And his staunch support from the business wing of the CDU will not suffice.

There will be additional candidates testing the waters. One is certainly Armin Laschet, the current premier in North Rhine-Westfalia (Duesseldorf/Bonn/Cologne), Germany’s most populous state. Even though he leads the largest CDU state caucus, his closeness to Merkel may be his vulnerability. He may well decide to wait and see.

No doubt, there is a kind of Clausewitzian “fog of politics” in current Germany. In my view, AKK appears to be the most likely successor to Merkel as party chair and the next candidate for occupying the Bundeskanzleramt, or federal chancellery.

One thing is clear: Merkel’s announcement yesterday has reenergized German politics, most certainly within the CDU/CSU constituency. To break the stalemate, to argue about alternative positions and leaders, has been overdue and can revitalize the party. The fate of the Social Democratic Party—which suffering even more devastating losses at the polls—remains uncertain. Party chair Andrea Nahles as of today has refused to enter into any debates about leadership changes.

The winners in Sunday’s state elections were the Green Party and the nationalist Alternative For Germany (AfD). As troubling as the recent upward trend of the AfD has been, the support for populism and xenophobia in Germany has not reached more than 15 percent. Compared to other countries this remains a relatively small constituency. Open-mindedness and tolerance are still strongly represented by the vast majority of voters and political office holders. In last Sunday’s Hesse election, the CDU lost about one hundred thousand votes to the Greens and to the AfD. It may well be easier to regain the lost votes from the AfD in a post–Merkel area. This represents a huge challenge, but not an impossible task.

The White House declined to comment on Merkel’s decision as an internal German affair. French president Emmanuel Macron remarked “Chancellor Merkel’s statement was dignified” and he expressed his admiration for Merkel’s leadership role in Europe. Poland’s foreign minister Jacek Czaputowicz expressed relief about Merkel’s intention to serve as chancellor until 2021. He stressed the stabilizing role of Merkel for the European Union. In a few days Chancellor Merkel and her team will travel to Warsaw for another German-Polish summit. She will receive a warm welcome, but her tenure as chancellor is clearly coming to a close.