Who Will Win the Workers? 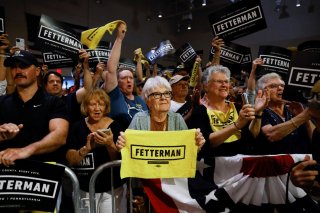 Recent years’ United States election cycles have been witness to the outsized political influence wielded by working-class voters in the industrial heartland regions anchored by the handful of critical Midwest swing states, particularly those voters who reside in communities that still struggle with economic decline.

In 2016 working-class voters in economically struggling, former blue-collar Democratic strongholds in the three key states of Wisconsin, Michigan, and Pennsylvania narrowly put Donald Trump in the White House. And while the 2018 U.S. midterms saw voters in more prosperous suburban districts and factory towns that had rebuilt their economies swing elections for the Democrats, voters in declining economic regions went even Trumpier. The same happened in the 2020 presidential election. Even as a strong anti-Trump turnout carried Biden to victory, working-class voters in ailing Midwest communities continued to salute the nationalist, anti-democratic, and nativist movement led by the former president.

This is not just a U.S. phenomenon—industrial heartland regions that have lost their major employers and seen their communities deteriorate are increasingly a fulcrum determining the fate and future of democracy in other Western countries.

In France’s recent presidential election, a rematch pitting centrist President Emmanuel Macron versus white nationalist Marine Le Pen, whose base of support remains the economically shattered communities of the industrial north—the margin of victory narrowed. While the once unthinkable-in-France (a nationalist party winning over the country) inched ever closer, President Macron (and France!) is not out of the political woods yet. He now faces a new threat from the populist Left, as his national assembly majority and agenda are threatened by a unified Left led by Jean-Luc Mellenchon, as polarizing a figure as Le Pen in French politics, and who draws strong support from many of the same alienated voters in ailing regions.

Back in the United States, the upcoming 2022 midterm elections will provide another interesting test around whether Democrats can resurrect their appeal to working-class voters, leading to the rejection of still-coming-on democracy-threatening Trump loyalists.

Nationally, Republican messaging, in part to try and turn attention away from Donald Trump and the stolen 2020 election, is focused on tarring all Democrats as progressive extremists, coastal elites trying to shove “woke” ideology on race, gender, and marriage down the throats of regular voters.

As I’ve written before, Democrats do have a real problem in either ignoring or talking down to working-class voters. Much more than a “messaging” problem, this disconnect is a real political problem for Democrats trying to reclaim their historic base of support among blue-collar voters. The high-profile decampment of progressive advocate Ruy Teixera from the center-left think tank Center for American Progress to the right-wing American Enterprise Institute put an exclamation point on the challenge facing Democrats. As he told Politico, the relentless focus on race, gender, and identity in historically liberal foundations and think tanks made it hard to do work that looks at society through other prisms—like class and the economy—that he feels are as, or more important. The current cultural milieu of progressive organizations sent him “running screaming from the left.”

The control of the U.S. Congress will likely hinge on this battle of woke perceptions, alongside other big national issues like inflation, general Biden dissatisfaction, and the battle over abortion. But several key Midwest battleground states are likely to see clear-cut competition for working-class voters between moderate Democrats sporting “everyman” appeal, and straight nativist, nationalist, and nostalgia-peddling Trumpers.

In two of the politically critical Midwest swing states—Michigan and Wisconsin—there may be something of a test of a Democratic blue-collar messenger vs MAGA loyalist. Michigan has no Senate race but a governor’s race in which incumbent Democrat Gretchen Whitmer, who won her first election in 2018 on a pledge to “fix the damn roads” and other lunch bucket issues; will face off against Trump-loyalist and 2020 election-denier Tudor Dixon.

In the other politically decisive Midwest swing state of Wisconsin, Democratic Lieutenant Governor Mandela Barnes, a progressive who sports working-class, labor union roots just won the Democratic primary and will get the shot to take on Trump loyalist Senator Ron Johnson.

In Ohio and Pennsylvania, there are two Senate races in industrial states that will be big-time tests of whether Democrats can win over the working class, particularly those anxious and angry about diminished job prospects, communities in decline, and their own feelings of a loss of status in a changing world.

In Ohio, Democratic Congressman Tim Ryan is trying to mimic the style of sitting Ohio U.S. senator Sherrod Brown, who has stayed in office in an increasingly red state by being the champion of the “forgotten” working class. Kicking off his campaign at a steelworkers hall in Shelby Ohio, Ryan said his campaign is about putting American workers "front and center" and resuscitating the working and middle classes.

Ryan’s opponent, JD Vance, first came to fame when, quite eloquently in his book Hillbilly Elegy, he detailed the experience and attitudes of the poor and working-class whites who migrated to Ohio and other states like it in the Midwest from the poverty of Appalachia, and how their worldview was shaped. But Vance vaulted past more establishment Ohio Republicans in a crowded primary field this year by losing all nuance—and going full Trump, full MAGA, full “great replacement theory”—even as far as insisting it was more important to stop the immigrant invasion at the U.S.-Mexico border than the Russian invasion of Ukraine

In Pennsylvania, an icon of the hardscrabble working man, Lt. Governor John Fetterman, former mayor of Braddock, PA, one of the many Western Pennsylvania steel towns almost obliterated by the industries’ change—pits its hoodied, hulking, six-foot, six-inch “blue collar everyman” frame against another Trump-endorsed Senate candidate, celebrity Dr. Mehmet Oz. On the campaign trail, Fetterman goads with salty language the multi-millionaire Oz as out of step with working people, challenging him to live on $7.25 an hour—the state’s minimum wage.

While left-wing populists are less dangerous to democracy than those on the Right, an even better outcome, as we are learning in our initiative to economically transform the industrial heartlands of our democracies, is when leaders of any political stripe treat the root cause of receptivity to resentment-driven populist politics, the economic angst of industrial heartland residents, and the felt decline of their once proud communities.

Let’s hope those who want to attend to these conditions from positions of political leadership can effectively learn to talk with heartland residents and other working-class voters.

John Austin directs the Michigan Economic Center and is a Nonresident Senior Fellow with the Brookings Institution and the Chicago Council on Global Affairs.