Whole of Government Should Be More than a Buzzword 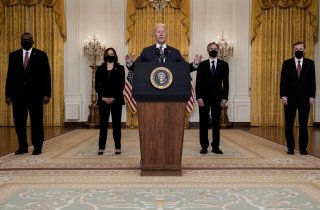 For years, officials of both Democratic and Republican administrations have treated the phrase “whole of government” as an object of veneration. By that, they have meant that multiple agencies of the federal government would be working together to address a given challenge or concern. In the national security sphere, the term has generally connoted close cooperation and coordination particularly among the State, Defense, and Homeland Security Departments, the Intelligence agencies, and the Agency for International Development (AID). Though the term has been in constant use, certainly since the 9/11 Commission’s report that outlined in glaring detail the lack of intra-governmental coordination, it has become more of a buzzword than a description of actual government practice.

Inter-agency cooperation, if it has taken place at all, normally has manifested itself at the cabinet-level. Over the past several decades, the George H.W. Bush team of Brent Scowcroft at the National Security Council (NSC), James Baker at State, and Dick Cheney at Defense probably offer the best example of close inter-agency coordination. Condoleezza Rice, when she was secretary of state, Bob Gates, when he became secretary of defense, and Steven Hadley, who succeeded Rice at the NSC are other examples. Indeed, the three of them formed a consulting group after they left government service.

Nevertheless, “whole of government” has been honored more in the breach, especially at the level of senior and junior bureaucrats, and at times, of lower-level political appointees as well. The chaos in Kabul is a case in point. Whether or not President Joe Biden was right to set a firm date for all American troops to depart from Afghanistan, it is widely accepted that executing that policy has been nothing short of a disaster. And one major reason for the mess that has engulfed Americans, allies, and Afghans as Washington pulls the plug on its twenty-year war has been the lack of coordination between State, Defense, and AID in particular.

It is true that numerous dedicated officials at all three agencies, whether at headquarters in Washington or in the field at Hamid Karzai International Airport, and whether political appointees or career civilian and military officials, have worked overtime to do whatever they could to enable all who wish to leave Afghanistan to do so. Moreover, many of these same officials have reached across agencies to coordinate their efforts as best they could.

Unfortunately, these officials may well be in the minority. With State responsible for addressing whatever paperwork was needed to enable people to enter the airport, and military personnel guarding the “wire” actually to let people in, there have been more snafus than ever should have taken place. And the price has been paid in particular by Afghans who had risked their lives—and those of their families—by allying themselves with the United States over the past two decades.

Matters have reportedly improved in the past day or so as more people are being transported out of Afghanistan. Yet conditions inside the airport remain horrendous. Far too many women and children often have no shelter in the oppressive heat as they wait hours to board an aircraft. Conditions at al-Udeid Air Base in Qatar, where the United States has brought refugees before staging them onward, are considerably worse.

Those heroic officials on the ground who try to assist them do so on their own time, as what is termed “collateral” activity in addition to their regular duties. There is little evidence that any particular agency is taking responsibility for this situation, much less working with sister agencies to do so. The humanitarian mess has yet to be cleaned up, and there are but a few days before Biden’s curtain comes down on all who wish to leave, forcing them to confront the Taliban’s tender mercies.

There are many lessons that will need to be learned once the crisis at the airport, in Kabul, and indeed elsewhere in Afghanistan is past, hopefully with all who have sought to leave that once again benighted country able to have done so. One of those critical lessons should be that “whole of government” no longer can be merely a buzzword. It is absolutely necessary that if the United States is to respond more coherently to crises such as that which materialized since the Taliban seized Kabul, its lead agencies, and not just agency leaders, but throughout the ranks, should stop treating their counterparts with suspicion or even disdain, and work to in harness for the betterment of those who pay their salaries, namely, America’s citizens.

Dov S. Zakheim served as the undersecretary of defense (comptroller) and chief financial officer for the U.S. Department of Defense from 2001–2004 and as the deputy undersecretary of defense (planning and resources) from 1985–1987. He also served as the DoD's civilian coordinator for Afghan reconstruction from 2002–2004. He is vice chairman of the Center for the National Interest.