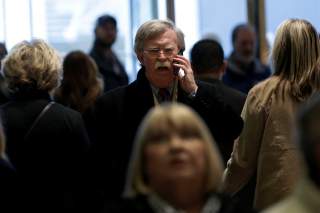 Here’s just how radical Donald Trump’s appointment of John Bolton as national security advisor really is: the Financial Times reports that even Iran hawks such as Mark Dubowitz, the head of the Foundation for Defense of Democracies, are rubbing their eyes in disbelief. “Bolton believes that the Iran deal is so fatally flawed that it cannot be fixed,” Dubowitz said. “My longstanding hope for a real fix for the Iran deal may have died an untimely death with the appointment of John Bolton as new national security adviser.” Others, such as Sen. Rand Paul, who declared that he would prevent Bolton from assuming any position in the State Department, are sure to be apoplectic at Bolton’s ascension to the National Security Council post, which does not require Senate confirmation. As national security advisor, Bolton is supposed to be responsible for coordinating administration foreign policy rather than pushing his agenda. Brent Scowcroft is often cited as the best in history at the post because of his skills at this task. Whether Bolton possesses them may be wondered.

A little more than a week ago, I speculated that it might be springtime for neoconservatism after Trump ousted Secretary of State Rex Tillerson and replaced him with CIA director Mike Pompeo. Strictly speaking, Bolton is not a neocon, but there is definite consanguinity. Bolton has never been worked up about the democratization of other countries. When I saw him on the eve of the Iraq War at the State Department as part of a group of Los Angeles Times editors, he made it abundantly clear that he simply wanted to smash Iraq. He’s a regime-change kind of guy: go in. Take out the enemy. Then leave. Do it again if necessary. So what Trump’s moves seem to signal is the rise of conservative nationalism or, to put it another way, the Cheney doctrine on steroids.

The Cheney doctrine was a tenebrous form of Republican militaristic unilateralism. The historian Arthur Schlesinger Jr., together with Richard Rovere, defined unilateralism in a 1951 book on Harry Truman and Gen. Douglas MacArthur as: “Go it alone; meet force with maximum counterforce; there is no substitute for victory; do not worry about consequences: these are the tenets of the new faith.” Sound familiar? A year later, D. H. Brogan, in a famous essay in Harper’s, called it the American illusion of omnipotence. In one form or other, this illusion has beguiled elements of the American right. It resurfaced in the 1970s, when Richard M. Nixon and Henry Kissinger were depicted as traitors by neocons and conservatives for pursuing détente with the Soviet Union. It manifested itself when conservatives called Ronald Reagan a useful idiot for embarking upon arms-control negotiations with the Kremlin. And it was a constituent element of Cheney’s worldview, which he foisted upon a credulous George W. Bush. Not until 2006, when he began to divorce himself from the Cheney-Rumsfeld crowd, did Bush begin to pursue more traditional Republican realist doctrines.

Bolton, for his part, has remained entirely consistent with the old-time gospel. He has never repudiated the Iraq War. Far from it. “I still think the decision to overthrow Saddam was correct,” he said in 2015. Indeed, he has espoused the same regime change arguments that he was espousing in the run-up to Iraq about Iran and North Korea. In January, he said on Fox News, “There’s a lot we can do, and we should do it. Our goal should be regime change in Iran.” Last month in the Wall Street Journal, he made the legal case for a preventive war against North Korea.

Bolton’s record is crystal clear. But it doesn’t necessarily mean that Trump will passively accept his direction. For one thing, a war, particularly a land war in Asia, would be a disaster for his presidency. And embarking upon a new adventure in the Middle East, where he explicitly campaigned against the history of bungled interventions, would mark a U-turn that even he, for all his feats of prestidigitation, would be unable to disguise. Trump doesn’t love the idea of going to war as much as creating the appearance that he will do it.

So far, Trump’s tenure has been marked by as many zigs as zags. Trump is mercurial. It’s also hard to avoid the feeling that he continues to engage in a reality-television approach, not only to domestic, but also to foreign policy. Trump is a shrewd stage manager. He knows that he can work to divert attention from his legal woes by creating a tsunami of publicity around Bolton, at least for a few weeks. He also knows that the media will fixate on tensions, real or imagined, between Bolton and Defense Secretary James Mattis. Trump likes conflict. There should be plenty of it in his foreign-policy team.

The danger, however, is that Trump, who has started to construct a war cabinet, stumbles, willy-nilly, into a two-front conflict in North Korea and Iran, much as Kaiser Wilhelm, another master of bluff and bombast, lurched into the cataclysm of World War I. The presence of hardliners such as Bolton and Pompeo is not going to serve as a brake on his more impulsive instincts. Quite the contrary. And if Trump goes on to oust Mattis and replaces him with another nationalist or neocon, then all bets are off.