Who's Afraid of the Sweden Democrats? 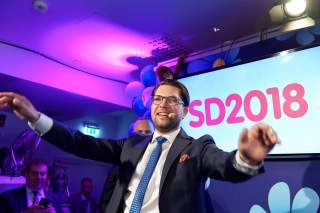 When 17.6 percent of the electorate in a sensible country like Sweden vote for an outsider party, the political elite should sit up and take notice.

The Swedish election results are in, and the widely vilified Sweden Democrats have made a good showing—though not as good as the Swedish (and European) establishment feared. The Sweden Democrats made the most significant gains of any party in the Riksdag, Sweden’s parliament, with 17.6 percent of the vote, but still finished in third place, behind the conservative Moderate Party and the socialist Social Democratic Party. This after an election campaign in which the Sweden Democrats were routinely branded as “racist” and “neo-Nazi” by their opponents—and by the international press.

Much like Hillary Clinton with her basket of deplorables remark, Sweden’s prime minister and Social Democratic Party leader Stefan Löfven refers to the Sweden Democrats a party with “Nazi and racist roots.” The Sweden Democrats hotly deny these claims. But in countries that are lucky enough to have a long history of political stability, there are inevitably skeletons in the closet. Just ask the most respectable of respectable parties in Sweden, the long-governing Social Democrats.

Sweden’s Social Democrats have been the largest party in the Riksdag for more than 100 years. They kept Sweden out of World War One, out of World War Two, and out of the Cold War. Lacking the tough mountain geography of fellow-neutral Switzerland, they’ve had to make a lot of compromises to maintain Sweden’s independence. Sweden still isn’t even a member of NATO, though it does cooperate closely with NATO on many issues.

One result of Sweden’s stability has been that it still has political parties rooted in twentieth-century fascism and communism. In most other countries, these parties were swept away by the tides of history. In Sweden, they stayed and reformed.

Yesterday’s Communist Party of Sweden is now known as the Left Party—a perfectly respectable party that campaigned in alliance with the Social Democrats.

And yesterday’s former fascist sympathizers have morphed, through a long series of reorganizations and name changes, into today’s Sweden Democrats.

In stark contrast to the “formerly Communist” Left Party (which only got 7.9 percent of the vote in Sunday’s election), the Sweden Democrats have been shunned by Sweden’s intellectual establishment and have never been in a governing coalition. They have never before received more than 13 percent of the vote in a Riksdag election, though their vote has been rising rapidly in recent years. Though widely condemned as an anti-immigrant party, their support among immigrants is almost as high as their support among native Swedes.

What sets the Sweden Democrats apart is their appeal to the Nordic equivalent of the Trump electorate: their support comes disproportionately from men, the less educated, middle-income earners, the self-employed, and (especially) people with blue collar jobs. Think "Sven the plumber" and you've got it.

And in a Trumpian campaign tactic specifically designed to enrage Sweden’s Europhilic establishment, the Sweden Democrats have called for a referendum on European Union membership: Swexit. The leader of the Sweden Democrats, the charismatic but controversial 39-year-old college dropout Jimmie Åkesson, has called the EU a “large web of corruption where no one has control over anything.” The fact that Åkesson himself may have a serious gambling habit—not an ideal quality in a party leader—doesn’t mean he’s wrong.

His voters are well-placed to understand Europe-wide social problems. The Sweden Democrats' main base is in the southern province of Scania, which is so close to Denmark that it's connected to Copenhagen by a bridge. Scania was actually part of Denmark until the 1600s. Now it is the first place people land when they cross over from the European "mainland" into the Scandinavian peninsula. As a result, when Europe has an influx of asylum seekers—like during the 2015 immigration crisis—they land first on Scania’s doorstep.

Like many mainstream conservative parties today, the Sweden Democrats position themselves as anti-immigration but not anti-immigrant. According to their platform, they "want to stop receiving asylum seekers in Sweden." They're tough on crime, but they support social security and universal healthcare. It seems likely that many Swedish racists voted for them, but in a democracy, you can't prohibit people from supporting you (as Donald Trump found out when he unwillingly received the endorsement of the Ku Klux Klan).

Guilt by historical association can be used to make just about anyone look bad. In the United States, the Democratic Party once supported slavery—until the Civil War. The northern Republican Party was often strongly anti-immigrant—before World War One. Similarly, Sweden’s Sweden Democrats may be descended from groups that once sported racist views. That doesn’t mean that mainstream media outlets should always attach the qualifier “with neo-Nazi roots” every time they mention the party.

People change. Parties change. Values change. It was flat wrong of Hillary Clinton to imply that "half of Trump's supporters"—a quarter of the American electorate—were "deplorables," and she paid the price for it on election day. And in a country like today's Sweden, you can't realistically imply that one-sixth of the population may be neo-Nazis, or neo-Nazi sympathizers, or even plain and simple racists. If you do, the people will take their revenge at the polls.

Salvatore Babones is an American sociologist and professor at the University of Sydney, Australia. He focuses on China, the global economy, quantitative methodology and the long-term impact of technology. He has written extensively and is the author of The New Authoritarianism: Trump, Populism, and the Tyranny of Experts .