Who's Really Afraid of Nationalism? 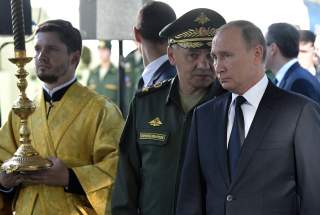 It was the best of times in Europe, in the 1990s, and it was the worst of times in Russia. The Soviet Union had ignominiously collapsed in 1991. Its outer satellites, the former Warsaw Pact nations, rushed as quickly to the West as they could. The Baltic countries, each an erstwhile Soviet Socialist Republic, went with them, leaving the newly created Russian Federation an experiment in difficulty. Its economy began at a low point and foundered. Economic weakness ensured geopolitical weakness. Throughout the Cold War, Moscow’s reach had threatened Western Europe. In the 1990s, Moscow’s reach was a thing of the past.

Russia of the 1990s was an exemplary failure. Moscow was diplomatically isolated, its poverty symbolic. It was the poverty of a country without an idea. In its economic and political affairs, Russia’s only real program was to catch up with Europe, the decade’s signature success. Europe had put to rest the demons that had unleashed two world wars. It had triumphed over the Cold War divisions, cheerfully dismantling the Berlin Wall after 1989. The removal of walls was equivalent to the removal of borders within the European Union (EU). Europe’s triumph was its openness: openness to itself, to the outside world, to commerce, to innovation. The reward for openness was stability and prosperity.

Two decades later, the tables have not exactly turned, but the changes are so profound as to seem historically inexplicable. Europe is still much richer than Russia: its legal systems are superior and quality of life is demonstrably better. Wealthy Russians go to live in Europe and send their children to study there, not the other way around. Yet political success and failure, social stability and crisis, have acquired unanticipated configurations. The European Union keeps nearing the edge of disaster, a dissolution similar to that of the Soviet Union in 1991. The Euro is a source of acute uncertainty, a lever of instability. And in the summer of 2016 the British did what the East Germans, the Poles and the Czechs had once done: they voted with their feet, as Vladimir Lenin might have said. They chose to leave the European Union. The governments of Hungary and Poland regularly broadcast their antipathy toward Brussels. Existential tremors—is this finally it for the European project?—are felt at every major European election.

Russia, by contrast, has discovered a kind of certainty under Vladimir Putin. Aided by petrodollar windfalls, Putin presided over substantial economic growth between 2000 and 2008. He transformed a chaotic political order of boisterous oligarchs and a weak state into a “power vertical” with the Kremlin on top. This has been devastating for hopes of Russian democracy. It has also yielded real executive power. Putin’s Kremlin has used state media to project a national idea—one-part appreciation of imperial Russia, one-part nostalgia for the Soviet Union and one-part present-day assertiveness on the international stage. In addition, Putin directed serious financial resources to the modernization of the Russian military. On the basis of this modernization, he has waged wars in Georgia and Ukraine and intervened to lasting effect in the Syrian civil war. (The European Union has suffered the consequences of this war without finding a way to exert any real leverage on it.) Putin’s military initiatives have added to his already considerable domestic popularity.

How could it be? How could Putin be riding high and Germany’s Chancellor Angela Merkel be rushing from one open wound to another? Where did Putin’s Russia come from? Where did the all the unimpeachable European promise of the 1990s go?

YORAM HAZONY, president of Israel’s Herzl Institute, has written a book that goes a part of the way to answering these questions. It is titled The Virtue of Nationalism. Hazony has written a polemic against what he perceives as the conventional wisdom—a refutation of the “paradigm of the European liberals” for whom the European Union is the highest stage of political excellence.

Hazony takes Brexit and the election of Donald Trump in 2016 as his points of departure. In his view, they are not aberrations and not the defeatist gestures of the ignorant and ill intentioned. They highlight the virtues of nationalism. Hazony helpfully addresses the appeal or the urgency of nationalist sentiment in Europe, the United States and elsewhere. But his book is far too eccentric to provide much real understanding. Presented as an essay on history, religion and philosophy, The Virtue of Nationalism is more precisely the cri de coeur of a patriotic Israeli. Hazony uses his sprawling subject to attack a post-nationalist critique of Israel and thus to pillory elite opinion in Europe and the United States.

Hazony’s core distinction is between empire and nation. Unlike many historians who would date the origins of the nation-state to the French Revolution or to the romantic nationalism of the nineteenth century, Hazony opens his story with “the Hebrew Bible.” The oppressors of the biblical Jews were empires, starting with Egypt. For Hazony, empires begin as successful nations until they become intoxicated with their own power. They seek dominion over others for ideological purposes or in the name of ideological purposes. Hazony notes “the unity of mankind that is the aspiration of imperial order.” Because of its appetite for control, because of its pretensions to control over all humanity, “every imperial or universal state must be a despotic state.”

Hazony’s club of imperial villains is inclusive. The Romans naturally appear, as in a different sense do the Christians and the Muslims. Geopolitical and theological universalists can easily conspire in the work of empire: the believers need the sword, and those who wield the sword know the utility of an all-encompassing cause. Later came the Holy Roman Empire and the early modern Spanish empire, which conquered the New World with a sword in one hand and a cross in the other. Hazony also traces an evolution whereby the nations of England and Holland decayed into empires in the seventeenth century. In the twentieth century, the Soviet Union and Nazi Germany vied for the laurels of empire. So streamlined is Hazony’s précis of imperial history that in his view “Hitler was no advocate of nationalism.” Hitler was purely an imperialist.

The Romans, British and Dutch would belong in any history of global empire. More controversially though, Hazony labels the United States and the European Union as imperial projects. With the United States in mind, Hazony does not limit himself to the formal empire and to the colonies, like the Philippines, over which Washington assumed control. His claim is more general. From acquisition of the Philippines to the Iraq War and beyond, the United States has pursued an imperialist foreign policy. Most controversially of all, Hazony sees the European Union in the same light. It is an expansionist empire, and the foreign policy elites of Europe and the United States prefer it so: “virtually no one in a position of influence in either America or Europe has showed much interest in picking a fight with the broad vision at the heart of these twin empire-building projects,” Hazony argues.

To identify a villain is to imply a hero. Hazony’s hero is the nation, and for the nation, his prototype is the Jewish people. The Bible documents the gathering of various tribes into a nation. Moses imbued this nation with religious spirit, after which it was formed into a kingdom invested in governing itself but not in ruling over others, eager to perpetuate its traditions and beliefs, to safeguard itself by safeguarding these qualities, and achieving political and cultural excellence in the process. The modern nation is contained within this biblical progression because “the tradition of individual rights and freedoms is rooted in the constitution of Moses.”

Such is the foundation for Hazony’s sui generis history of nationalism. Christians and Catholics especially tended to forget the lessons of the Jewish people’s ur-nationalism, hence their attraction to aggressive empires. For a while, Protestants avoided this inclination. They created what would become “the old Protestant order” composed of the English, Dutch and then the American nation. Those who lent a “Protestant construction to Western civilization” built on the salutary example of not just the Jewish nation, but also of city-states from Athens to Venice to Florence. The old Protestant order encouraged a flowering of creativity, something Hazony takes to be axiomatic. He claims that:

Those periods of history that we find most admirable in terms of the kind of individuals they produced, and their fruitfulness in terms of works of science, religion, and art, were always periods in which the political order was one of small, independent states in competition with one another, whether national states or tribal city-states.

Against a mountain of imperial French, Russian, British, Austrian and German evidence—from Alexander Pushkin to Charles Dickens to Sigmund Freud—Hazony states that “the contribution of imperial states has been, in comparison, strikingly sparse.”

Hazony concludes with an inner and outer defense of nationalism. Nationalism is good for the individual because it generates “that gratifying tension between the intense loyalty to the inherited traditions of his own nation and tribe.” Humility, tolerance and maturity do not flow from bland Enlightenment or liberal notions of rights, from the fantasy of escaping the particular. They are the product of proud belonging to a nation. The ethical precepts embedded in the constitution of Moses were passed to tribe and nation, and only the nationalist who knows this heritage, who reveres this heritage and who passes this heritage from generation to generation will gain the full benefit of the Mosaic precepts. Nations give people roots not just in politics but in ethics.