Who's a Terrorist? Lessons for Screening Syrian Refugees 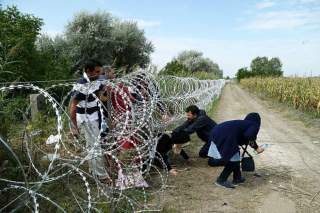 Should the United States take in Syrians fleeing their forlorn country or not? The issue is acute, since 300,000 Syrians are now dead, four million are refugees, and another eight million have been displaced internally as a result of the ongoing war—with no end of the disaster in sight.

So far, the domestic discussion on the subject has largely been a Rorschach test of political principles and fodder for partisan debate. To President Obama, this is a simple moral issue (even though, until this year, he had not made any appreciable efforts to increase annual quotas for Syrian war refugees). Of course, he insists on stringent vetting by U.S. immigration authorities first, to ensure that refugees are not terrorists in disguise. But otherwise, the president strongly supports bringing up to 10,000 Syrian refugees a year to America. To many governors and members of Congress, especially Republicans, this is a matter of national security—they are opposed to taking in Syrian refugees, having noted that some of those participating in the Paris attacks and other recent acts of terrorism in Western countries had Syrian origins and/or passports.

How to assess the competing claims? Beyond anecdotal evidence from individual incidents, is there any systematic way to assess the future dangers of bringing Syrians to the United States? One place we might look for insight is Afghanistan, where American and other NATO forces have acquired a huge amount of experience over the last fifteen years in trying to vet possible recruits for the Afghan army and police.

Of course, Afghanistan is not Syria. But there are significant parallels that make the two cases at least somewhat analogous. For many years, the Taliban have sought to infiltrate Afghan security forces with plants, and to recruit existing soldiers and policemen to their cause. They have sought to have their sympathizers carry out insider attacks, especially against American troops, in an effort to weaken western will and resolve. At one point, this tactic nearly succeeded, killing forty-one NATO troops in 2012. Over the entire war to date, Afghan insiders have killed 142 NATO troops in a total of eighty-five separate cases, according to U.S. military data available on our Afghanistan Index at Brookings.

About one million Afghans have joined the army and police over the course of the conflict to date. That makes for an estimated rate of one truly dangerous recruit out of every 10,000 accepted, in approximate numbers.

What are the implications for the Syrian refugee issue? If we sought to bring in 10,000 a year, perhaps 1,000 to 2,000 of these refugees would likely be young men, statistically speaking. That is far and away the group of individuals most likely to produce dangerous extremists. Over a five-year period, this simple calculation suggests we might bring in up to 10,000 young men. The Afghanistan precedent suggests that one of them might be a terrorist able to beat the system and sneak in. To avoid false precision, however, it is more realistic to state the estimate as somewhere between zero and a few.

Is that risk high or low? Of course, here we are talking about individuals who might commit mass murder if given the chance. Still, mathematically, it is much less than the size of the prison population in the United States, which includes about 0.5 percent of all citizens.

Thinking in these terms does suggest an alternate, third way forward: we can focus on the quality of vetting. By my very rough estimates, up to 1,000 NATO troops may have had a hand in vetting Afghan recruits at the peak of the war effort, when some 100,000 new soldiers and police were joining the force every year. The U.S. government today does have several hundred people responsible for screening refugees—but they are already busy, and it is not clear they will have the capacity to take on the new proposed burden.

So even if President Obama is right on the merits, perhaps he is wrong on his current tactics. Rather than only berate the GOP for heartlessness, he could spend more time working with the Congress to determine how many more people we might need to hire to do the vetting right—and then to get on with the job of hiring and training them. That way, the American government and American people can come together in this holiday season to show the country’s true spirit of compassion and generosity.