Why Africa Could Provide an 'ISIS Renaissance' 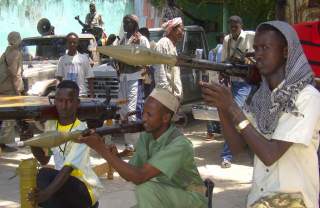 In October, Iraqi, Syrian and coalition forces celebrated the fall of Raqqa, one of the most important and final areas of control for ISIS. While ISIS will likely continue as a danger to the West, there is also a threat that the terrorist-insurgency group could move from the Middle East and set up a new base in Africa.

ISIS has been one of the most formidable and well-organized terrorist groups in history. It would be naive to assume that ISIS will simply cease operations in the face of recent losses. A more likely scenario is that the group, along with its many followers, will attempt to disperse to a new base.

In October 2017, Somalia experienced a horrific terrorist attack in its capital Mogadishu carried out by al-Shabaab, a terrorist group affiliated with Al Qaeda. Somalia is one of many countries in Africa afflicted by civil unrest, poor governance, racial and religious tensions and poverty. As its presence in Iraq and Syria has shown, these are the conditions where ISIS thrives, making parts of Africa fertile breeding grounds for terrorism.

Public awareness in Western countries of current terrorist activities in Africa remains low, which could allow the group time to regroup in the continent. In fact, this could be a case of history repeating itself. Back in 2013, many Western populations seemed to be unaware of the presence of ISIS and its involvement in Syria and Iraq.

Indeed, the parallels between the more fragile parts of present day Africa and the early days of the Syrian crisis are alarmingly similar. In 2014, ISIS took advantage of civil unrest and government corruption to establish a foothold within Syria. It successfully competed against several terrorist groups in the region, including Jabhat al-Nusra. Its aim was to eliminate them and split from Al Qaeda in 2013.

In East Africa, al-Shabaab is an example of one such terrorist organization that is aligned with Al Qaeda. However, it is increasingly threatened by ISIS, which is competing for dominance and followers in the region. One of al-Shabaab’s senior commanders, Sheikh Abulqadir Mumin defected to the group in 2015 despite al-Shabaab’s vocal opposition.

The makeup of ISIS in Africa still remains fragmented, but progress is being made by of Africa’s migration hub, which has since claimed to be behind low-level attacks on an army checkpoint in Burkina Faso and a high-security prison in Niger, both in 2016. The group has already received a pledge from Boko Haram in Nigeria, rebranding the country as “Islamic State in West Africa Province” in 2015.

ISIS has also further established the “Islamic State in the Greater Sahara,” taking advantage of a group that is making plenty of headway in Western Africa, but is also active in Tunisia, Libya and Egypt.

One major reason for why parts of Africa could become new bases for ISIS is that the internet has significantly expanded across the continent. In 2014, 100 million people in Africa were using Facebook each month. Now, that figure is projected to be more than 120 million. Over 80 percent of Facebook users in Africa use their mobile phones to access the social network.

Despite the largely positive development of improved connectivity, this development could ultimately benefit ISIS and its propaganda, which is often communicated online. The group’s media strategy involves producing content from a central hub, with the improved internet access providing renewed opportunities for propaganda operations from the continent.

There is a danger that parts of Africa could suffer terrorist atrocities similar to those witnessed in Syria in the past few years. African nations and Western states could work in partnership to address the socioeconomic challenges that allow terrorism to thrive. Recently, the more fragile parts of the continent have become a strategic focus for a number of Western states, including France and the United States.

Already we are seeing ISIS and other terrorist groups take advantage of these complex challenges in the continent. The attacks seen in Somalia, Burkina Faso and Niger could be a precursor for wider terrorist atrocities in Africa, especially given that ISIS is looking to recuperate and establish a new “caliphate.”

Antonia Ward is an analyst in the Defence, Security and Infrastructure team at RAND Europe. Her research interests include counterterrorism, countering violent extremism, intelligence and cybersecurity.

Image: Somali fighters belonging to Ahlusunah warjama, a moderate sect fighting against the hardline al-Shabaab insurgents, display weapons during a parade in Mogadishu July 31, 2010. Al-Shabaab, which is linked to Al Qaeda, controls much of southern Somalia and is fighting to topple the Western-backed government in the lawless Horn of Africa nation. REUTERS/Omar Faruk