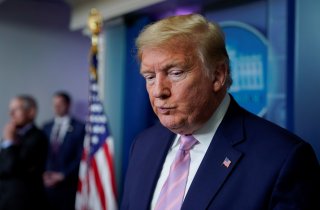 The Antonine Plague in 165 ACE killed five to ten million people over a decade and marked the end of political stability in Rome for a century. The Bubonic Plague devastated fourteenth-century Europe before five hundred years of Western ascension. Smallpox carried in the bodily fluids of Spanish Conquistadors killed tens of millions of Amerindians in the New World. In the space of a few years, all of the pre-Columbian empires vanished.

In February of this year, experts at the World Health Organization warned that Coronavirus could kill forty-five million people and the media recoiled with doomsday predictions. Fortunately, the bleakest of forecasts did not materialize, but the coronavirus may yet produce a paradigm shift—an inflection point in history when societies and their institutions must adapt to disruptive change or face extinction.

The question is what kind of inflection point? The answer is unclear. Answering this question involves admitting just how starkly the pandemic has exposed the spring-loaded fragility of the global economy and systemic weaknesses in western societies. Inside the United States, close to half of all households are living paycheck to paycheck and, for many of them, the loss of a month’s income means hunger and despair. Countries like Italy, Spain, and Portugal that were spiraling toward bankruptcy before the crisis will confront even worse conditions when the pandemic ends. This time, the mutualizing of debt in Europe seems unlikely. As a result, the Eurozone may not survive.

Health-care systems were largely unprepared, less so because of inadequate medical staff (nurses, physician assistants, doctors) than because of a breakdown in supply chains. The channels that Americans depend on to deliver critical medical supplies were based overseas and these proved to be unreliable in an emergency. As a result, Americans (and millions in Europe) are still short of masks, testing kits, pharmaceuticals, and a plethora of other medical equipment, much of which is manufactured in China.

Instead of closing borders, suspending travel, clamping down on public gatherings, and rigorously screening persons at airports, western governments dithered. Most were content to leave borders open and allow normal activities to continue. Great Britain initially promoted a defensive strategy called “herd immunity,” a fancy phrase for doing nothing. The mayor of Florence declared “Hug a Chinese Day” to thwart a non-existent backlash against Chinese workers living there (some from Wuhan Province). And in early March, authorities in Spain disregarded early warnings and allowed thousands to march in the streets of Madrid in support of International Women’s Day. Today, Madrid is in total lockdown.

Western media coverage throughout the crisis has been a potpourri of Pavlovian doom and gloom. However, what lies beneath the surface of virus histrionics is something far more transformative: the breakdown of a corrupt and unsustainable global order. The corporate cadres, central bankers, global intelligentsia and the paradigms that empower them are losing control.

The temptation to blame everything wrong on today’s leaders for the problems arising from the pandemic would be reactionary foolishness. Political, economic or pandemic disasters nearly always unmask weaknesses from years—usually decades—of mismanagement and self-delusion. When this happens, systems are tested, institutions crumble (some solidify) and new paradigms rooted in battle-tested values are established. It has happened before.

Throughout the 1920s, the promise of “unbroken and unbreakable prosperity” from prominent figures in Washington sent stocks higher even as the real economy slowed. Eventually, explained John Kenneth Galbraith, “the market crash broke into an exceptionally fragile, financial, banking, and general economic structure.” An era of Republican government fifty years in the making ended and a new era of Democratic rule began with the election of Franklin D. Roosevelt to the presidency.

Long-term problems heretofore subject to denial or neglect are beginning to collide with short-term reality. These include but are not limited to fractional reserve banking, globalization, just-in-time manufacturing, open borders, and economic financialization. All of these forces are now careening at breakneck speed into the same ditch. The question now is what emerges from the ditch?

Speculation about the birth of a new age prior to the end of the current one is a precarious but necessary affair. We cannot be certain the unprecedented emergency measures launched by authorities will not miraculously pull us back from the brink of destruction. However, it is just as likely that these extraordinary actions will hasten its demise. Sometimes an overcorrection does more harm than good.

If that happens, then we are potentially headed for a new order in a radically altered world. We could witness the emergence of a new financial system backed by new forms of currency (crypto). Repatriation of supply lines could be a boon for middle-class jobs in western countries. A tightening of border controls will likely firm up sovereign identities and government power may concentrate to facilitate these changes. Further, in an era of reduced outsourcing, heightened demand for medical technology, telework, and labor-savings devices could stimulate an explosion in innovation and possibly a jobs revolution.

The coronavirus has shown us that cracks in the system are far deeper than we thought, making a paradigm shift in our societies a possibility; one could argue that this is likely. The pandemic may turn out to be the clarion call that prefigures long-overdue changes that no emergency fund of “helicopter money” can delay much longer.