Why America’s Military Dominance Is Fading 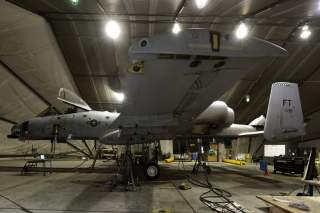 It is often said Congress hates to cut or cancel weapons systems, usually for reasons relating to jobs and elections back home. But the record shows that Congress is much more likely to curtail new equipment purchases for the military rather than get rid of or retire the old stuff.

This tendency is increasingly problematic for the U.S. military. In many capability sets and domains, the traditional margins of U.S. military technological supremacy are declining across the services. Too often, policy makers think of this as an emerging challenge that can be dealt with in the coming years. But, as has been documented previously and stated by many senior Pentagon officials over the past year, America’s declining military superiority is now a “here-now” problem.

Frank Kendall, undersecretary for acquisition, technology and logistics, recently said, “I’m very concerned about eroding technological superiority and where we’re headed. […] We’ve had 20 years since the end of the Cold War [and] sort of a presumption in the United States that we are technologically superior militarily. I don’t think that that’s a safe assumption. In fact, I think that we’ve gotten complacent about that and we’ve been distracted for the last ten years fighting counterinsurgencies.”

U.S. Pacific Command chief Admiral Sam Locklear reiterated the same point recently, noting “Our historic dominance that most of us in this room have enjoyed is diminishing, no question.”

Now that defense budgets are in their fourth year coming down, this preference to fund the old is increasingly coming at the expense of the new. Paying for yesterday’s equipment is not a static or one-time bill. This is one that only grows as equipment ages and gets more expensive to maintain. These restrictions are starting to hurt investment in innovation and tomorrow’s forces and their battlefield edge.

Over the past decade, Congress has approved the truncation and early termination of many weapons—big and small. Letting go of legacy, or existing, equipment and assets has proven much trickier for Pentagon leaders.

Look no further than the House-passed defense authorization bill for 2015 for example. The F-35 Joint Strike Fighter is a key part of Air Force, Marine Corps, and Navy modernization plans. Yet with near-sequestration budgets continuing, the Pentagon was forced to shrink its scheduled purchase from last year of buying forty-two F-35s in 2015 to only requesting thirty-four in the president’s latest budget. The House of Representatives signed off on this smaller lot of F-35s without any resistance in its NDAA, and supported cuts—albeit to four aircraft instead of eight—in its version of the 2015 defense appropriations bill.

The F-35 is a multirole fighter aircraft and is intended to replace many older airframes including the Air Force’s A-10 Warthog, which the service has been flying for nearly forty years. As with the F-35, the Pentagon was forced to propose painful cuts to the A-10 due to near-sequestration-level budgets enacted by Congress. Yet unlike with the F-35, proposed cuts to the A-10 have generated a hailstorm of debate and Congressional action as lawmakers have pushed back against its proposed retirement. If Congress prohibits the Pentagon from retiring the A-10, with budget caps looming, the Air Force will be forced to shift money from other priorities, including other fleets of aircraft and perhaps even the F-35.

The very different Congressional reactions to proposed cuts to the A-10 and F-35 demonstrates that it is faster and often politically easier to curtail, cancel or delay weapons in development or production than to get rid of existing hardware. This “bird in the hand” approach by Congress ultimately feeds the need to then shrink further, postpone or eliminate more newer programs to help pay for the older stuff getting older.

Congress holds an important oversight role in budgeting for national security. Yet despite frequent caricatures about Congress exclusively supporting expensive new weapons above all else, the reality is that members are often skeptical of new programs and tend to instead circle the wagons of protection around older systems the Pentagon has proposed shedding.

While versions of the latest defense spending bills have gained attention for blocking a variety of military plans—including the proposed retirement of the A-10s and U-2 spy planes, as well as the temporary lay-up of eleven cruisers and three amphibious ships—Congressional skepticism of proposed retirements is not a recent phenomenon.

In 2001, Congress prohibited the retiring of Los Angeles and Ohio-class submarines unless they were deemed unsafe. In 2005, Congress blocked retirements to all F-117 stealth fighters that were in use in 2004, as well as all E models of the KC-135 tankers. Congress reinforced this position the next year, again blocking all retirements of KC-135Es and F-117s.

In 2011, Congress prohibited the Navy from retiring the EP-3E spy aircraft. In 2013 and 2014, Congress rejected Pentagon plans to retire Navy cruisers and amphibious dock landing ships (with one exception), as well as the RQ-4 Block 30 Global Hawk aircraft. Other limiting actions by Congress to shed systems since 2001 include C-5 and C-130E airlifters, along with B-52 and B-1 bombers.

To its credit, in many of the cases where Congress blocked proposed retirements, it gradually gave ground. For instance, although it blocked all retirements to KC-135Es in 2005 and 2006, in 2007, it authorized the Air Force to retire twenty-nine in 2007 and up to eighty-five in 2008, contingent upon progress towards developing a next generation tanker. Similarly, while Congress prohibited all B-1 retirements in 2012, it relaxed its position in 2013 and authorized the Pentagon to retire up to six bombers. These steps were welcome measures to give the Pentagon more authority over its own budget. Yet delaying and limiting retirements came at a very real cost: the Pentagon was forced to find dollar-for-dollar savings elsewhere in its budget, reducing other military capabilities and disrupting the Department of Defense’s plans.

Meanwhile, Congress has frequently given Pentagon leaders broader leeway to curtail and axe outright newer equipment programs. Many of the most notable examples came in 2010 and 2011, when Secretary of Defense Robert Gates proposed cancelling or terminating production on weapons such as the F-22 fighter aircraft, the C-17 cargo airplane, the CG (X) cruiser, the F-136 alternate engine, the Air Force’s combat search and rescue helicopter, the VH-71 Presidential helicopter and the Army’s Future Combat Systems.

Other high-profile terminated and truncated programs from recent years include the Comanche helicopter, the EP-X reconnaissance aircraft, the Crusader self-propelled howitzer, the Expeditionary Fighting Vehicle, the Advanced SEAL Delivery System and the C-27J airlifter. While in the case of the C-27J, the Pentagon was able to at least salvage some value by transferring seven of the aircraft from the Air Force to Special Operations Command and fourteen to the Coast Guard, all too often, such as with the Comanche and EFV, the Defense Department has spent billions of dollars without fielding any operational systems.

Missile defense systems have been especially hard hit, with cancellations or early ends to the Multiple Kill Vehicle, the Kinetic Energy Interceptor, the Airborne Laser, the Navy’s Area Theater Ballistic Missile Defense program and the Third Generation Infrared Surveillance program. Similarly, many satellite systems have also been the targets of cuts, including the National Polar-Orbiting Operational Environmental System and the Air Force’s Transformational SATCOM system.

High-profile systems have not been the only programs in development or production targeted by the Pentagon leadership and Capitol Hill. Even smaller systems have been shrunk, eliminated or killed, including the Army’s Aerial Common Sensor, the Navy’s Advanced Deployable System, the Precision Tracking Space Sensor and the Surface-Launched Advanced Medium Range Air-to-Air Missile.

While clearly some retirement prohibitions and even some weapons cancellations may have been prudent, the long-standing misrepresentation that Congress has never met a new system it doesn’t love is simply not accurate. The reality is that Congress fights much harder as a bloc to protect equipment that has been in use for years rather than pay for new equipment coming online.

While occasionally healthy, this knee-jerk instinct to oppose most plans to let go of the older equipment threatens to hold back even further anemic U.S. military modernization plans. Worse, this preference is increasingly funneling more dollars to what are often less survivable systems.

In the long-run, Congress’ inability to change the status quo is eroding the military’s readiness for the next fight and mortgaging the future for the present. Eventually, policy makers will need to restore balance across the Defense Department portfolio to adequately ensure tomorrow’s forces get the very best equipment, just like those who served before them.