Why America and Europe Need a Transatlantic Strategic Council 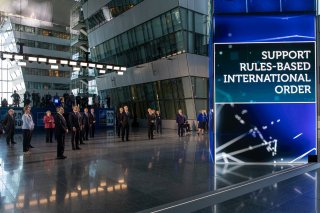 IN THE name of reclaiming (American) “credibility and moral authority” and of “repairing” U.S. alliances in the post-Donald Trump era, the Biden administration has begun to press NATO and EU members, including Sweden and Finland, plus NATO and EU associates such as Ukraine, as well as Japan, Australia, and India, into a new coalition that is intended to meet “the growing ambitions of China to rival the United States and the determination of Russia to damage and disrupt our democracy.”

In implementing what can be called a global strategy of “double constrainment,” Joe Biden has emphasized that he is willing to work with both Russia and China, and other “authoritarian” regimes, such as Iran and North Korea, if not NATO-member Turkey, through appropriate diplomatic channels—but only when the United States and these authoritarian states possess the “intersecting interests” to do so.

In addition to immediately extending the New START Treaty for five years, Biden offered to engage in direct discussions with President Vladimir Putin on “the full range of issues facing the United States and Russia.” The June 2021 Biden-Putin summit then engaged in discussions over cyber-security, nuclear proliferation, climate change, the Iran nuclear deal, North Korea, Afghanistan, as well as human rights.

Biden’s initial offer of cooperation with Putin was made just before Washington imposed additional financial sanctions on Moscow after having already placed sanctions in response to Russia’s alleged role in the SolarWinds cyber-intrusion, as well as its alleged efforts to influence American elections in 2020, plus Moscow’s “severe human rights abuses” in Crimea. These were to be just the “first salvo” of Biden’s threatened measures—after he had accused Putin of being a “killer.”

Somewhat similarly, after China flew nuclear-capable bombers over Taiwanese airspace in mid-January, Biden expressed a willingness to work with Beijing on the Covid-19 health pandemic, climate change, nuclear proliferation, as well as Iran and North Korea, while also discussing human rights. He then imposed additional sanctions on China and on Chinese officials accused of “genocide” with respect to Uighur Muslims sent to re-education and work camps, as well as Chinese officials accused of repressing Hong Kong democracy activists. Much as was the case with Putin, Biden accused Chinese president Xi Jinping of being an autocrat who was betting that he could outcompete “democracy.”

Biden’s moves to initiate U.S.-Russia and U.S.-China summits thus far represent positive steps toward peace in circumstances in which Moscow and Beijing believe that Washington is engaging in new forms of “hybrid warfare” aimed at checking their geoeconomic interests, undermining their alliances, and seeking “democratic regime change” in both countries. With Moscow assisting Beijing in developing a major missile defense system, while also supplying advanced weaponry, the Eurasian duo has begun to move toward a full-fledged alliance that hopes to take advantage of U.S. overextension and splinter the U.S.-Japanese alliance, the Association of Southeast Asian Nations (ASEAN), as well as NATO and the European Union after Brexit.

TO DEAL with this dangerous situation, it is crucial that the United States and the EU “think outside the box” by implementing an alternative global strategy that enters into real dialogue and flexible diplomacy with all “rivals” where necessary and appropriate.

The formation of a permanent Transatlantic Strategic Council, which would work in conjunction with a U.S.-EU Trade and Technology Council, as had been proposed at the June 2021 U.S.-EU summit, can help to rebuild allied unity and better coordinate global U.S.-EU geostrategic and political-economic strategies, while also finding a better balance between U.S. and NATO “power” and “responsibility” sharing with a more autonomous EU.

In seeking a rapprochement with Russia and China, a new U.S.-EU global strategy should attempt to draw Moscow and Beijing away from forging a full-fledged defense alliance—without alienating either country or turning one against the other. Concurrently, the United States and the European Union should work with both Russia and China where possible to reduce nuclear weaponry; wind down the Global War on Terror; and mediate disputes in the eastern Mediterranean, the Black Sea, the wider Middle East, Latin America, and the Indo-Pacific, among other regions.

IT IS crucial that a Transatlantic Strategic Council address the ongoing conflict between NATO member Turkey and NATO-EU member Greece over Cyprus and energy resources in the eastern Mediterranean—a dispute that prevents NATO and the EU from fully cooperating.

Reconciliation will prove even more difficult now that Biden has accused the Turks of severe human rights violations and of genocide in 1915–17—at the very time the Europeans and Greece have entered into an uneasy dialogue with the authoritarian Turkish leader, Recep Tayyip Erdogan, in April.

The deterioration of relations with Turkey not only jeopardizes U.S.-NATO-EU-Turkey defense and economic cooperation, but it also risks destabilizing the “new Near East” where Turkey has been asserting its interests in its former Ottoman space. With French and Turkish naval forces nearly clashing in July 2020 over a cargo ship that was believed to be smuggling arms to Libya, Ankara’s assertive policies in its quest for energy resources, support for the Muslim Brotherhood, and close ties to Iran have brought together a coalition of Greece, Cyprus, Egypt, Bahrain, the UAE, Saudi Arabia, and Israel, backed by the United States and France, that seeks to “double constrain” both Iran and Turkey.

By threatening to send Syrian refugees into Europe, engaging in Moscow’s TurkStream energy pipeline that bypasses Ukraine, testing the Russian-supplied S-400 missile defense system that could penetrate NATO defenses, and developing closer financial and defense ties with China, Erdogan has hoped to pressure the United States, NATO, and the Europeans into complying with Turkey’s neo-Ottoman ambitions and “Blue Homeland” naval strategy.

After some heated personal exchanges between French president Emmanuel Macron and Erdogan (over Macron’s defense of “blasphemy” against the Prophet Muhammad and Erdogan’s decision to reconvert Hagia Sophia into a mosque), plus the threat of limited EU sanctions on Turkey in December 2020, Athens and Ankara initiated their first direct talks in nearly five years in mid-January 2021. Then, in April, the UN also restarted 5+1 talks over Cyprus. The UN had come very close to resolving the Cyprus question in 2004 by proposing a complex bizonal, bicommunal federation. To prevent another UN Security Council veto, a new plan will require Russian backing.

As Turkey has not signed the UN Law of the Sea, talks will prove very difficult unless the United States, EU, Greece, and Turkey can soon negotiate the larger issues, including the 1923 Treaty of Lausanne that favored Greece. What is needed is a multilateral conference that seeks ways to engage in maritime delimitation, joint development of energy resources, financial arrangements for sharing gas revenue, and to deal jointly with migration issues, among other mutual concerns, such as Turkish help to stabilize Afghanistan after U.S. and NATO withdrawal.

The dilemma, however, is that after Biden’s accusations that Turkey committed genocide, the chances of reaching a major accord appear even bleaker. Biden’s accusation comes at a time when Turkey opposes potential Biden administration support for Kurdish groups in Syria, Iraq, and Iran, which Ankara sees as potentially aligned with its domestic Kurdistan Workers’ Party nemesis. Biden’s accusations also come at a time when the EU continues to refuse to admit Turkey as a full member—due to “continued negative developments in the rule of law, fundamental rights and the judiciary” under Erdogan, at least since the 2016 “Gulenist” coup attempt.

Even after his meeting with Erdogan at the June 2021 NATO summit, Biden appears to be gambling that Erdogan will lose the June 2023 presidential election due to Turkey’s deep financial crisis. Yet even if Erdogan does lose his grip on power, the spokesperson for the CHP, the major opposition party to Erdogan’s AKP, called Biden’s accusation of genocide a “great mistake.”

Biden accordingly appears to be taking the risk that Ankara will not move even closer to Beijing and Moscow. Even though Turkey is still at odds with Beijing over its repression of Uighur Muslims, it nevertheless needs Chinese finance. And despite the fact that Ankara backed Azerbaijan in the “drone war” over Nagorno Karabakh in 2020 that humiliated Russian-backed Armenia, Turkey and Russia still cooperate over the TurkStream pipeline and in northern Syria over the Kurds.

In this regard, Turkey could still adopt a more independent stance (including the option of a nuclear weapons capability as Erdogan has threatened) and move even further away from its presently loose ties with NATO and the EU while reaching out to China, if not Russia as well. The latter is possible even if Ankara condemned Moscow’s annexation of Crimea in 2014, in part to win favor with Washington, but did not impose sanctions on Russia. Much as Imperial Germany was able to penetrate the Ottoman Empire at the beginning of World War I—in part due to strong British criticism of Turkish human rights abuses at least since the Armenian massacres of 1894—Beijing and Moscow could also obtain hegemonic control over Ankara.

A U.S.-EU rapprochement with an “authoritarian” Turkey that eventually leads to a resolution of Greek-Turk disputes is accordingly crucial to draw Turkey away from moving even closer to Iran and China, if not Russia—in large part as Ankara controls Moscow’s access to and from the Black Sea. Here, Turkey’s purchase of Russian S-400s (which violates the Countering America’s Adversaries Through Sanctions Act, making Ankara vulnerable to more U.S. sanctions), for example, could possibly be resolved if Turkey refrained from its full deployment.