Why America Can't Play Russia off Against China 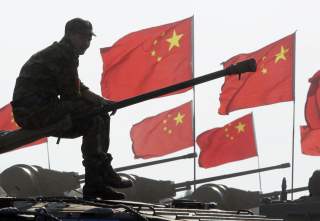 A perverse struggle is underway now within the “Blob.” Half of Washington (or slightly more) is convinced that Russia has undertaken a brazen attack against America’s democratic institutions and that liberalism everywhere, but particularly in its Euro-Atlantic core, is under sustained assault from the Kremlin and its army of “bots.” But the other half believes such claims are mostly malarkey intended to undermine the current president’s electoral legitimacy. They contend, by contrast, that Russia is merely one “chess piece” in the larger struggle against China. Recent references on the right to Beijing’s “interference in American domestic politics” illustrate how willing one side of this asinine debate takes up the dubious ammunition deployed by the other.

In a somewhat cynical way, the current administration’s sudden announcement that the United States intends to withdraw from the Intermediate-Range Nuclear Forces (INF) Treaty is an attempt to square this circle. In what seems on the surface to represent a robust diplomatic demarche aimed at the Kremlin, the reality is an attempt to apply heavy diplomatic and strategic pressure on Beijing. Yet, the move has the rather convenient, simultaneous impact of mollifying (or at least briefly quieting) the many Kremlin-baiters on Capitol Hill. Indeed, the subtext of National Security Advisor John Bolton’s recent visit to the Kremlin appears to have been an attempt to suggest to Russia’s leaders that China constitutes the biggest threat to Russia, as well as to America.

One Russian-language article in the newspaper Nezavisimaya Gazeta [Независимая Газета] (NG) covering the Bolton visit to Moscow appeared under the headline “The Kremlin is Advised to Keep Away from China” [Кремлю Предлагают Держатся от Китая Подальше]. To my estimate, the withdrawal from IMF is more a political stunt that laid the groundwork for the second Putin-Trump meeting coming up in France, rather than a well thought out strategy. But first let’s consider a timely October 2018 analysis in Military Review [Военное Обозрение] by Ilya Polansky, which asks the vital question in the headline: “Who is the Main Enemy for the USA: China or Russia [Кто главный враг США: Китай или Россия]?”

Polansky observes that following the collapse of the Soviet Union, Moscow was simply too weak to stand up to Washington. He explains that “it was an era of a unipolar world, in which the USA dictated its will to the rest of humanity. [было эпохой однополярного мира, в котором США диктовали свою политическую волю всему остальному человечеству].” After the Georgia War in 2008, he contends that “our country returned to its usual spot for Americans – enemy of the progress of humankind.” Then, the Ukraine events of 2014 meant Russia became the “main enemy of ‘American democracy.’” After that, he asserts, “… a real information war against our country began.” By contrast, Polansky suggests that America’s problem with China is more economical than ideological. For instance, he illustrates that America has very good relations with its former enemy Vietnam—still very much a communist state. Moreover, Polansky writes: “In the White House, China’s policy is considered to be expansionist [В Белом доме политику Китая квалифицируют как экспансионистскую].”

He sees the Washington establishment as divided among anti-Chinese conservatives and primarily Russophobic cosmopolitan liberals. The article notes that some American conservatives sympathize with President Vladimir Putin and consider “Russia as an outpost of traditional and conservative values… [о России как о форпосте традиционных и консервативных ценностей].” Without rendering judgment, Polansky even admits that some of these conservatives might prefer Russia, as a country facing the common problems of “‘white’ humanity [‘белым’ человечеством].” The author then lists some of the accusations that American “cosmopolitan liberals” level against Russia, including “violations of human rights, freedom of sexual minorities, [and] persecution of the opposition…” With a little bit of seeming sympathy, he allows that the liberal cosmopolitan “position is more principled … [Их позиция более принципиальна].”

Putting aside momentarily Washington’s ferocious debate on which power constitutes the gravest threat, was Bolton’s recent trip to Moscow the first attempt to play the Russia card against China? This is what I have described elsewhere as a “Kissinger move in reverse.” To say that Moscow is skeptical of this overture is likely a significant understatement. The sub-head of the article summarizing Bolton’s visit to the Kremlin reads “Putin will not succeed in avoiding the China theme at the new meeting with Trump [Путину на новой встрече с Трампом не удастся обойти тему КНР],” which implies obviously this is not a subject that Putin wants on the agenda.

That article also features comments from Fyodor Lukyanov, Chairman of the Council on Russian Foreign and Defense Policy. He comments that the upcoming summit must rightly focus on the urgent issues of nuclear weapons and arms control, Syria, Ukraine, and North Korea. As a sad comment on the state of contemporary U.S. diplomacy, he notes dryly that it matters not what is actually discussed, since “the result will be something completely different,” given the American President’s total focus is on domestic political imperatives. With regard to China, Lukyanov offers crisply: “There are no people crazy enough to think that Russia would be willing to join an anti-China alliance [Нет сумасшедших, которые бы полагали, что Россия готова вступить в антикитайский альянс].” Lukyanov explains that Bolton’s efforts are aimed at preventing Russia and China from becoming ever closer: “Bolton has not hid this and is not hiding it [Болтон этого не скрывал и не скрывает].” Noting that Beijing is one of Moscow’s most important partners, he concludes, “There is no doubt that the Trump Administration has China on their minds – it’s their policy. Russia, of course, will not join them [Россия, конечно, к ним присоединяться не будет].”

Perhaps the idea of discarding the INF Treaty is not entirely senseless. After all, it could prompt some discussion in Moscow, Beijing and elsewhere about the nature and direction of China’s rapid improvements in missile technology. The practical impact of leaving the INF Treaty is, moreover, likely exaggerated. Putting aside the not inconsiderable issue that Washington would probably have nowhere to base medium-range missiles in either Europe or the Asia-Pacific, both superpowers have more than enough nuclear firepower on sea-based and air-based assets to obliterate each other many times over.

On the other hand, the symbolic import of leaving the INF Treaty will undoubtedly be enormous and devastating, further inflaming dangerous rivalries and putting into question other important arms control agreements. As venerated Republican statesman George Schultz wrote recently in the New York Times, “Leaving the treaty would be a huge step backward.” Both political parties in America are partially responsible for the New Cold War and the resulting chaotic and violent state of world politics. Under President George W. Bush, the wrecking ball was first applied to arms control as America pulled out of important agreements such as the ABM Treaty. However, President Bill Clinton started the fateful ball rolling on North Atlantic Treaty Organization expansion, while President Barack Obama poisoned the delicate U.S.-China relationship with his poorly thought out “Pivot to Asia” and clumsy attempt to undermine the Asian Infrastructure Bank.

Trying to play a “Russia card” against China now is at best a pointless waste of time based on a simplistic view of history, but at worst may well further intensify strains across the key geopolitical rivalries. I have explained elsewhere that China-Russia cooperation is helpful on the most delicate and vital issue of North Korea. American leaders must rise above geopolitical gamesmanship derived from simplistic, zero-sum thinking and attempt to build a more viable world order by nurturing, constructive relationships simultaneously with all other great powers.