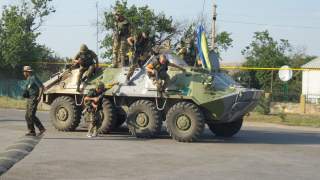 Hybrid warfare—the term applied to Russia’s particular approach to irregular warfare in Ukraine—is the threat du jour in international security affairs. Unfortunately, by focusing attention on Moscow’s purported deviousness and cunning, and conflating the annexation of Crimea with the ongoing conflict in eastern Ukraine’s Donetsk and Lugansk regions, it avoids examining the real reasons for the Kremlin’s successes (and failures). Both deserve greater scrutiny.

Russia’s annexation of Crimea was shockingly effective—and bloodless—and it is appropriate that it should provoke thinking, analysis, debate and even constructing new models (or giving greater attention to existing ones) to explain it. Nevertheless, since we might see more such irregular warfare in the future, we should insist on greater precision and honesty in our conversations.

First, however successful Vladimir Putin’s little green men may have been in seizing Crimea, that particular approach is unlikely to be widely applicable. Crimea was unique, or at least very, very rare, in combining a substantial foreign (Russian) naval base and associated military presence, a major power with well-developed special operations capabilities, a very substantial local majority sympathetic to the government owning the base (including some of the host nation’s military personnel and local officials), and a parliament that had already voted more than once (before current events) to join that country. Where else is this true?

In fact, what worked in Crimea demonstrably failed in eastern Ukraine, where Vladimir Putin appears to have fundamentally miscalculated support for the separatists (and reactions even among some Russian-speakers elsewhere in Ukraine). The Kremlin did not swiftly and cheaply establish new Russian provinces (which was probably not Putin’s aim), relatively stable quasi-independent unrecognized regions under Russian protection like Georgia’s Abkhazia and South Ossetia (not too likely but a possible objective), or some other enduring arrangement winning long-term Russian influence in Ukraine (most probable). Instead, Russia’s leader has ensnared himself and his country in a costly, long-term insurgency/nation-building quagmire that is difficult to exit and could escalate to something much worse. Fomenting instability for political ends in far off lands is one thing, but doing it on your own border is something else entirely.

Second, why is it exactly that the United States and its NATO allies have had such difficulty responding to what Russia is doing? It is not only because Moscow developed seemingly novel tactics. On the contrary, a degree of self-examination—which can always be a little painful—suggests that in important respects the answer may have less to do with Moscow’s approach than our own. Three factors stand out.

One is that Russia’s seizure of Crimea happened very quickly. U.S. and European decision-making processes just don’t move at that speed, particularly when facing ambiguity. Once a Crimea-style operation has begun, it will be extremely difficult if not impossible for Western decision-makers to be sufficiently confident about the other side’s intent to take consequential action before it’s too late. While we can and should strive to improve our intelligence-collection (to get information more quickly and make better sense of it), this makes deterrence and long-term responses important and limits our options for immediate reaction.

Another factor is that widespread feelings of military (and moral) superiority over Russia and even invulnerability to conventional warfare essentially blinded decision-makers to Russia’s perspectives, capabilities and potential actions. In other words, Western leaders have had a hard time formulating a response because they weren’t even thinking in these terms before the spring of 2014. U.S. and European leaders were wholly unprepared for an angry Russia that dared to use force in a region they thought they owned militarily, politically and economically.

As former Secretary of Defense Robert Gates said last year, “we have underestimated, for a long time, the magnitude of the humiliation that Russians felt with the collapse of the Soviet Union because it also involved the collapse of the Russian empire.” This is primarily a result of consolidated conventional wisdom and political correctness in much Western discussion of Russia over an extended period—the same intellectual blinders that prevented hard questions from receiving serious attention in Washington prior to the U.S. invasion of Iraq.

A similar problem is that many Western analysts, politicians, commentators and even leaders have not been honest with themselves about their real commitment to Ukraine, much less wider public interest. Russia’s actions have exposed the fact that talk is cheap and that no small number of Ukraine’s Western supporters are cheapskates. It has also uncovered the degree to which elite-level aspirations for Ukraine moved far beyond what voters are prepared to back. A recent Pew Research Center survey illustrates this by demonstrating tepid Western support not only for Ukraine, but even for fighting to defend other NATO members.

More concretely, after years of statements about Ukraine’s importance, the European Union was unwilling to provide what now looks like quite limited economic support to former President Viktor Yanukovych as he balked at signing the Association Agreement that contributed to this whole mess. Likewise, some leading individuals in the U.S. Congress who repeatedly voiced strong support for Ukraine are now (correctly) unwilling to risk American or NATO military action after apparently assuming that they would never have to answer this question. And they cannot mobilize sufficient votes from their colleagues to provide Ukraine with financial assistance comparable to what the tiny and less strategically significant Georgia received after its 2008 war with Russia—another way in which aspirations became disconnected from reality.

This is dangerous behavior. America’s—and the West’s—ability to understand reality before making important policy choices is critical to our success in a complicated world where two rival major powers are dissatisfied with the Western-defined and U.S.-led international order.

Moreover, one could argue that leaders’ failure to understand reality was what brought down the Soviet Union—America’s previous challenger. Soviet central planning ignored economic realities and former Soviet leader Mikhail Gorbachev apparently did not foresee predictable outcomes when he permitted criticism and even protests while simultaneously demonstrating that he would not use force to contain them. We (and many Soviet citizens) may have welcomed the outcome in that case, but it is clearly not what leaders wanted or expected. If American leaders don’t take a serious look around at the world and examine some of their own assumptions, they might face increasingly expensive surprises themselves—perhaps next time in East Asia. As wealthy and powerful as it is, the United States can’t afford too many outcomes like that.