Why America Can't Win Its Revenge War in Afghanistan 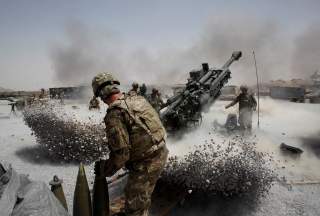 For the vast majority of Americans, this past Saturday was just another day on the calendar. College football fans streamed into stadiums across the nation to watch their favorite teams, friends met up for a drink or two, and the overworked and strung out among us caught an extra few hours of sleep.

October 7, however, wasn’t an ordinary Saturday. Rather, it marked the sixteenth anniversary since the United States began dropping the first bombs on Taliban installations and Al Qaeda bases throughout Afghanistan—a military campaign that President George W. Bush labeled as the opening phase in a war that would require patience, perseverance and support from the American people. The war objectives back then were simple, straightforward and easy to understand: the United States was attacked by nineteen terrorists who turned four commercial airplanes into ballistic missiles, and it was time for some payback. The group that planned and executed the worst terrorist attack in modern history and the Taliban regime that hosted that group needed to be taught a lesson. Bush said that afternoon that U.S. military action in the months ahead would be “designed to clear the way for sustained, comprehensive and relentless operations to drive them out and bring them to justice."

Back in October 2001, the country was still mourning and had barely passed the first stage of grief. Those who had no idea whether or not their loved ones made it out of the Twin Towers before they collapsed continued to hope that relatives and friends would wind up at their front doors tomorrow or the next day. You didn’t have to be a fully-formed adult to feel the depth of the country’s wounds; even as a seventh grader, I could tell that my classmates, their parents and even random guy shopping for food at the supermarket were all on edge. Indeed, the entire country was in a state of fear. While New Yorkers were continuing to search for bodies at Ground Zero, many Americans from coast to coast were almost operating on the assumption that another attack on the scale of 9/11 was in the offing.

As perverse as this may sound today, those first Tomahawk cruise-missile strikes on Taliban compounds and Al Qaeda hideouts was a celebratory affair. The people who bloodied our nose were now getting their faces pounded. The opening three months of Operation Enduring Freedom wasn’t so much about freedom per se as it was about punishing the criminals who took the lives of nearly three thousand innocent people, including hundreds of first responders. Those criminals also destroyed one of the New York skyline’s legendary landmarks.

And punish them we did. In the weeks before September 11, the Taliban were the rulers of Afghanistan, having steamrolled nearly every militia group and warlord they confronted on their way to Kabul. The Northern Alliance was holed up in the far north of the country, recuperating from the assassination of Ahmad Shah Massoud, the legendary anti-Taliban commander. Osama bin Laden was the father of the jihadist movement, leading a terrorist network that churned out thousands of recruits.

In the weeks and months after 9/11, the Taliban was a spent force. Its commanders were dead or in hiding, and its ragged, tired and dirty fighters were without supplies and retreating from the very territory they spent years fighting to capture. Al Qaeda’s training camps were destroyed, U.S. bombers were laying waste to Al Qaeda foot soldiers, and Osama bin Laden himself had been forced to part ways with his family for the safety of the Tora Bora mountains. At one point, as the full weight and power of the U.S. Air Force was unleashing hell on Tora Bora, U.S. special operations commandos heard on the radio frequency Bin Laden’s quivering voice as he apologized to his men for getting them into a dire predicament.

Sixteen years later, U.S. troops not only remain in Afghanistan but now they are being reinforced with an additional three thousand soldiers. The rules of engagement have been loosened, with commanders in the field granted more authority to launch more bombs on more target sets. A third consecutive U.S. president is hoping that perhaps with a little more firepower and a little more time, the United States and its NATO allies can accomplish an objective that has proven elusive for the previous decade and a half. U.S. commanders running the war remain upbeat that the new strategy, combined with a more capable Afghan army, “is the beginning of the end for the Taliban.” We’ve heard this kind of rhetoric before, of course, but the war has been going on for so long that most Americans have tuned it out.

How did the war in Afghanistan, which started with a noble purpose, transition from the “good war” to the unending war? Military analysts, presidential historians and filmmakers will spend decades trying to figure that out. Some filmmaker will release an award-winning documentary series about America’s misadventures in Afghanistan just as Ken Burns and Lynn Novick did with America’s misadventure in Vietnam.

The only difference between this version and the Burns project? The documentary on Afghanistan will cycle through a lot more film before the final cut.