Why America Is Destroying Iraqi Cities to Save Them 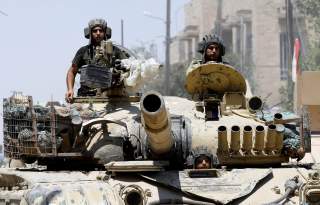 Mosul is destroyed. Many of the estimated 875,000 residents displaced by the fighting can’t return home because their houses are among the piles of rubble left behind. Mosul joins cities like Stalingrad, Hue, Grozny, and more recently, Aleppo and Raqqa—all destroyed by violent combat. The so-called victory in Mosul should give us cause to question the limited options available to militaries forced to fight in cities.

Estimates of the cost of rebuilding Mosul range into the billions. The deaths of thousands of civilians and the loss of heritage sites, like the Great Mosque of al-Nuri, can never be recouped. Did the removal of ISIS require destroying Iraq’s second largest city? Unfortunately, yes.

To be clear, Mosul was not a battle fought by the U.S. military. But the Iraqi forces who undertook this urban fight did so with U.S. advice, training and tools—including advanced surveillance technology and firepower—and their performance offers illustrative lessons about the limits of the methods and capabilities available for urban combat.

ISIS chose Mosul as a symbol of its fictitious state as well as an ideal battleground. That allowed the group to simply avoid many of the comparative advantages enjoyed by traditional military forces. Three years ago, ISIS fighters moved into the city, overwhelmed Iraqi forces, and began preparing to hold and defend the new capital of their self-proclaimed caliphate. They kept civilians in the city to use as human shields. They dug tunnels and made boreholes in walls to avoid being seen and targeted by aerial surveillance assets and bombers. They blocked streets by piling cars, concrete and other material between the densely packed buildings. Like a cancer in a human body, ISIS embedded into its host and started to spread its poison.

But for cancer, there are medical options. If certain types are caught early enough, doctors can locate the cancerous mass, operate to remove a majority of the poisonous cells, and then treat residual remnants with radiation and chemotherapy.

The military, by contrast, has few tools for dislodging a cancer like ISIS from its urban host, or for operating effectively in cities more generally. There are no specially equipped urban units. There is no school or site at which to train for major operations in dense urban terrain; no institute dedicated to the study of urban warfare.

For the U.S. military, there are basically two approaches to fighting in cities. The first can in part be traced to the 1972 failed rescue of the Israeli Olympians taken hostage in Munich. After that, specialized hostage rescue and close-quarter battle tactics were perfected by counterterrorism units and special operations forces and then passed to general purpose military forces. These “enter and clear a room” tactics are practiced religiously and are heavily dependent on actionable intelligence—in other words, knowing what target to attack.

The second approach is outright destruction. With roots traced to tactics like ancient siege warfare, U.S. forces will isolate all or part of a city and either control access to exhaust the supplies, support, or morale of its opponents until they surrender or move to clear every structure, building and room with maximum firepower, until all enemy personnel are found and killed. Often, this includes attempting to remove civilians so even more destruction can be employed, as U.S. forces did when they routed over a thousand insurgents in the 2004 Second Battle of Fallujah.

But these approaches are on extreme ends of a spectrum with little in the middle: soldiers have few options between a five-ounce round and a five-hundred-pound bomb. They can’t see inside buildings, target specific individuals fortified within dense urban terrain, separate civilians from enemy combatants, or do anything other than destroy with weapons and techniques designed for fighting major armies on the plains of Eastern Europe or in some future war with peer militaries. The military has very few of what it calls nonlethal—or even less destructive but more effective—tools.

Marines fighting in the 1968 Battle of Hue in Vietnam arguably had more effective tools for fighting in cities than soldiers have today. They had tear gas, flamethrowers, recoilless rifles and unique anti-tank vehicles that all were beneficial to urban fighting.

U.S. forces no longer have such tools in part because of policy decisions that have reduced nonlethal or less destructive techniques. For instance, in 1997 the United States signed an international treaty banning wartime use of chemical weapons, which includes tear gas. Flamethrowers are also not used by U.S. forces—the Convention on Certain Conventional Weapons now prohibits the use of incendiary weapons when a concentration of civilians are present. While these policies perhaps fall within evolving normative bounds, the logic of certain broad-brush policies is debatable: police can use tear gas on U.S. citizens, but U.S. soldiers can’t use tear gas in combat on enemies—or to help civilians.

Another reason those tools are unavailable to U.S. forces relates to the limits of advances in military technologies over the past two decades. Those advancements have been focused on increasing precision and lethality. In city fighting, this means the military can destroy a building rather than a city block, but that’s simply not good enough.

Solving these problems will take more than bringing back old weapons or increasing defense spending. It will require a major shift in our approach. It will take the U.S. military accepting the urban environment as a special case instead of treating it as something that standard formations, techniques and weapons can be modified to address.

Over half of the world’s population resides in cities, and the United Nations estimates that figure will reach 60 percent by 2030. Other threats beyond ISIS are learning the advantages they can gain by drawing military forces into urban environments. Until the U.S. military learns how to properly train and fight in cities, it will kill the patient to get the cancer.

Maj. John Spencer is an Army Infantryman and deputy director of the Modern War Institute at the U.S. Military Academy at West Point. The views here are those of the author and do not reflect those of the Department of the Army, Department of Defense, or the U.S. government.

Image: Iraqi soldiers look out from a tank as they advances towards the Islamic State militants positions in the Old City in western Mosul, Iraq June 18, 2017. REUTERS/Erik De Castro