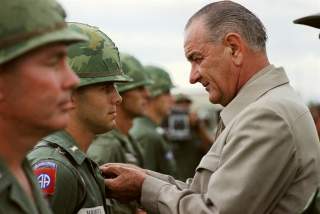 Miscalculation lies at the root of many, if not most, foreign-policy crises and wars. Trump and his advisers should be very careful about what they say and do, and especially about what they assume about the possible behavior of enemies both real and potential. War and peace is not a schoolyard game of one-upmanship. It is, literally, life and death.

IN VIETNAM, too, we became entangled in what one top official (with no apparent sense of the paradox) called an “all-out limited war” through a series of decisions made over almost two decades. With each step out on the slippery slope, from aid to advisers to more advisers to combat troops, we became more deeply committed until that commitment itself—our credibility—became the essential reason for further, massive escalation.

The dangers of incrementalism certainly apply today in places like Afghanistan and Iraq, where our commitment is limited to advisers whose numbers and roles may soon be expanded. How, after sixteen years, can we continue to believe that a small—or even a large—infusion of U.S. troops in Afghanistan can do what more than one hundred thousand could not previously accomplish? At what point do we decide that even a major commitment of Americans cannot compensate for the weakness of our ally?

Of course, with Trump, as with Barack Obama and George W. Bush, domestic politics likely influenced decisions to up the ante in Afghanistan. No one wants to see that country “lost” on his watch. This is eerily reminiscent of what Ellsberg called the “stalemate machine” in Vietnam, with each president doing just enough to keep South Vietnam afloat until he leaves office.

CLOSELY RELATED is a geopolitical truth that Americans historically have been loath to accept—that power, no matter how great, has limits. In the 1960s, the United States was the world’s greatest power militarily and economically, but in Vietnam it could never find ways to use that power to attain its political goals of thwarting North Vietnamese expansion and building, from scratch, a Jeffersonian democracy in the South.

We still enjoy a vast advantage over other nations in military spending and hardware. No more than in the Vietnam era does that mean we can solve the problems we face on terms we favor. Our power greatly exceeds our capacity to use it.

Americans tend to believe that what they do—or don’t do—is the key to success or failure in foreign policy. In fact, as Vietnam showed so clearly, local circumstances often determine outcomes.

A weak, divided South Vietnam proved so unreliable as an ally that after 1965 we tried to do the job of defeating the North almost on our own. At the same time, our resolute, utterly committed foes, the National Liberation Front (Viet Cong) and North Vietnam, were the ones in fact willing, in JFK’s words, to “pay any price, bear any burden” in pursuit of victory. They had sanctuaries to protect themselves from extermination, and allies like China and the Soviet Union to provide massive assistance.

In Afghanistan today, we back a weak, corrupt central government in a vast nation with no tradition of federal control and a small scattered population divided along ethnic, religious and tribal lines, surrounded by nations with more compelling interests and greater ability than the United States to affect the outcome—while fighting against a resilient foe that seems magically to recreate itself after each setback, enjoys sanctuaries in Pakistan that help it to do so and possesses infinite patience. Can the application of our power make up for these intrinsic disadvantages?

Both then and now, American leaders have failed to know their enemies. LBJ longed to get “ol’ Ho” Chi Minh in a room where he could employ his formidable powers of persuasion, in the mistaken belief that Ho was no different from the labor leaders and legislators he was accustomed to manipulating. Ho was not a senator or labor leader, of course, and even if LBJ had gotten him in a room, he likely could not have persuaded him to compromise on American terms.

Most alarming is that U.S. leaders apparently had no idea that after 1963 at the latest, Ho did not wield dominant power in Hanoi. In fact, the pragmatic Ho’s earlier compromises with the French in 1946 and at the Geneva Conference in 1954—his “two mistakes”—had become by 1965 for Le Duan and his hawkish allies a compelling mantra against any compromise with the United States that in any way undermined the fundamental goal of a unified Vietnam under Hanoi’s control.

In dealing with our Middle East adversaries—and China, Russia and especially North Korea—President Trump ought not to assume that they will respond to his bluster and blandishments in the same way partners and rivals in the business world did. Rather, the art-of-the-dealer in chief needs to recognize that other countries have their own history and perspectives on the contemporary world that may, or more likely may not, accord with his, and that getting to “yes” with them may require very different tactics than those he used to build his real-estate empire.

The admonitions recounted here undoubtedly appear weighted on the side of nonintervention or limited intervention. But these lessons are bipartisan. They are grounded in important premises of both conservative (prudence) and liberal (humility) political thought. Given America’s dismal record in the past few decades, such restraint appears prudent—and greater national humility about our role in the world appears eminently justified.

George C. Herring is Alumni Professor of History Emeritus at the University of Kentucky. Michael C. Desch is professor of political science and founding director of the Notre Dame International Security Center.